Desperate for points, Dortmund were able to break down a pesky Augsburg team for their first win three weeks. But early mistakes showed they are still not cemented as a top-four side. 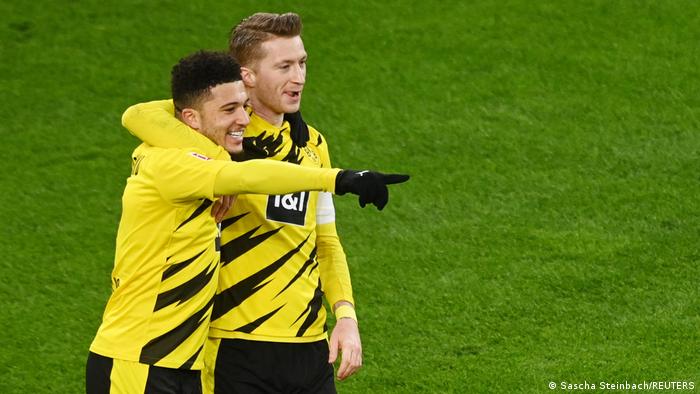 After earning one point in their previous three games, Borussia Dortmund's task on Saturday was clear.

Losses to Bayer Leverkusen and Borussia Mönchengladbach last week saw Dortmund in seventh place entering the weekend. A win against the Bavarian club was a must if last season's runners up wanted to maintain a legitimate challenge for a Champions League spot.

Edin Terzic's team delivered, with Thomas Delaney, Jadon Sancho and an own goal turning around an early 1-0 deficit. But it still wasn't the complete performance Dortmund needed to silence those who doubt they can end the season in the top-four.

In both of Dortmund's most recent losses against Leverkusen and Gladbach, defensive lapses lead to cheap goals that put them behind before they could even get going.

Saturday's game seemed to follow a similar script. Despite starting the game strongly against a compact defense, Dortmund allowed their opponents to score the opening goal for the third straight game.

Augsburg's Andre Hahn was completely unmarked in the penalty after Florian Niederlechner headed on a cross from Eduardo Vargas. Dortmund goalkeeper Marwin Hitz, filling in for the injured Roman Bürki, could do nothing to stop Hahn from finding the back of the net.

The goal "was a bit unnecessary," Dortmund midfielder Julian Brandt told Sky Germany after the game. "But most of all the reaction to last week was very good." 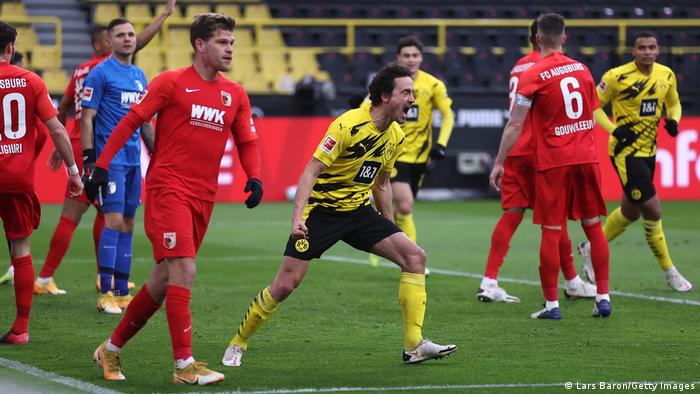 Indeed it was, as that early goal wound up being their only major blunder in a solid bounce-back performance. Haaland did clang a penalty off the crossbar, but Delaney's equalizer from a Marco Reus free-kick jolted the hosts back to life.

Though the result wasn't the complete performance Zorc may have been looking for, it did restore a bit of faith in Terzic's ability to lead Dortmund back into the top-four — the Augsburg result puts them in fourth with Wolfsburg (fifth) still to play Sunday.

The interim coach, who replaced Lucien Favre in December, has come under some fire after going winless in three straight games. Dortmund's poor defending on set-pieces was a particular shortcoming he urgently needed to address. But after conceding three goals against Gladbach on dead-ball situations, Dortmund only had to defend two set-pieces against Augsburg, one of which was a corner in second-half stoppage time.

Terzic did have Dortmund's backing even before Saturday's game, with Zorc insisting that the club will continue with him and saying the interim coach has "instituted the right things." Nonetheless, Dortmund's competent performance against Augsburg, a team they lost to earlier this season, is a sign he could have his side on the right track.

In fairness to Terzic, he is not in an ideal coaching situation. It's no secret that his superiors have their sights set on Gladbach gaffer Marco Rose, who could opt out of his contract after the season. Trying to lead a team to a Champions League spot while while not being part of the club's long-term future is a tough task.

Much more formidable opponents, including Sevilla in the Champions League, await Dortmund in February. With teams like Wolfsburg and Union Berlin providing a legitimate challenge, last year's runners-up need to put together more complete performances soon.