Bayern Munich dropped their first points of the season but Borussia Dortmund failed to capitalize and were beaten at Bayer Leverkusen. Hamburg's slump continued with defeat at Hertha in new coach Markus Gisdol's debut. 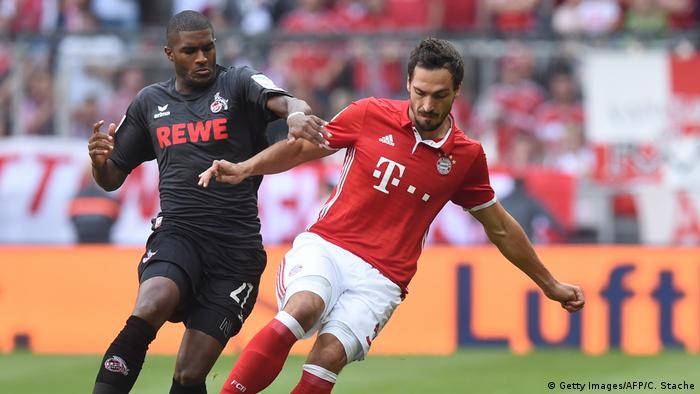 Leaders Bayern dropped their first points of the campaign when they squandered the lead and were held at home by fourth-placed Cologne, who remain undefeated this season.

In-form Joshua Kimmich put the champions ahead five minutes before halftime when he flung himself to send a glancing header past Cologne goalkeeper Timo Horn from Juan Bernat's cross.

Anthony Modeste netted an acrobatic leveler just after the hour mark when he met a Marcel Risse center and poked the ball past a floundering Manuel Neuer.

Horn pulled off a superb save to deflect a Thomas Müller volley onto the underside of the crossbar and Bernat drove a shot against the post before Cologne had a glorious chance to win it in added time.

With Arnold Schwarzenegger watching from the stands, it ended a disappointing week for Bayern following Wednesday's 1-0 defeat at Atletico Madrid in the Champions League. 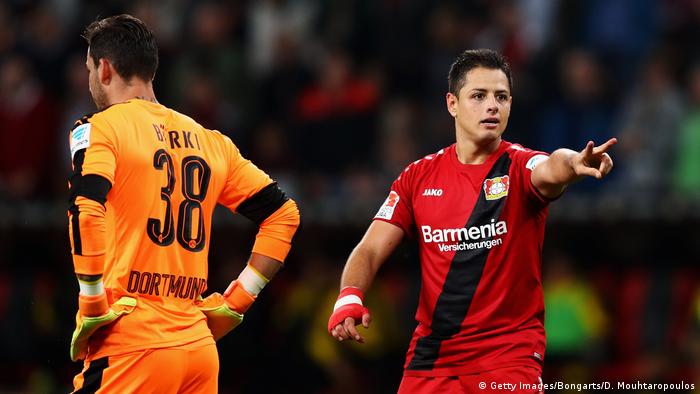 Chicharito killed off Dortmund with his fifth goal of the campaign

Dortmund failed to make the most of Bayern’s draw and their goal glut dried up as they slumped to a second defeat of the campaign, while Leverkusen climbed to seventh.

The home side were ahead early when Admir Mehmedi took advantage of a slip by Julian Weigl in the area and headed powerfully past Roman Bürki, ending a goal drought for the Swiss lasting more than 1,100 minutes.

The home side came close to a second just after the half hour after a mistake by Dortmund's Raphael Guerreiro. Kevin Kampl picked up the ball but his effort fizzed just wide with Bürki beaten.

Dortmund were trailing at the break for the first time this season and it got worse for Thomas Tuchel’s side 11 minutes from time.

Hakan Calhanoglu set up Javier Hernandez and the Mexican, who netted a treble in last weekend’s 3-2 win at Mainz, made no mistake for his fifth goal of the campaign.

Hertha climbed above Dortmund into second thanks to a second double in as many games from Vedad Ibisevic.

Hertha twice struck the frame of the goal before the Bosnian forward made it 1-0, collecting a deflected shot and stabbing the ball past Hamburg goalkeeper Rene Adler.

Ibisevic, who struck twice in last weekend's 3-3 draw at Eintracht Frankfurt, netted a second from the penalty spot 20 minutes from time after Albin Ekdal felled Valentin Stocker in the area.

It was a disappointing debut for Hamburg's new coach Markus Gisdol, who replaced the sacked Bruno Labbadia after the defeat to Bayern last weekend, and it leaves HSV second from bottom with a solitary point.

Antonio Colak scored his debut Bundesliga goal to put Darmstadt ahead from the penalty spot after Theodor Gebre Selassie had bundled over Jerome Gondorf.

Bremen defender Lamine Sane nodded home after some head tennis in the area to equalize six minutes into the second half before Bremen edged ahead. Serge Gnabry raced onto an Ousman Manneh pass, rounded Darmstadt goalkeeper Daniel Heuer and slotted into the empty net.

Colak secured a point for the home side with a candidate for goal of the day, crashing home a far-post volley from a hanging Gondorf cross.

Bremen are 15th with four points, one fewer than 14th-placed Darmstadt.

Hoffenheim, who are seventh and have also yet to lose this season, took the lead when Andrej Kramaric slid a cross to the far post. Sandro Wagner turned the ball into the net after Ingolstadt goalkeeper Orjan Nyland came out and failed to collect.

Kerem Demirbay's precise strike from the edge of the penalty area, his debut Bundesliga goal, made it 2-0. Ingolstadt netted a consolation goal, but it was too little, too late. Even after Lukas Hinterseer scored from the spot, Ingolstadt remain winless in 16th place. 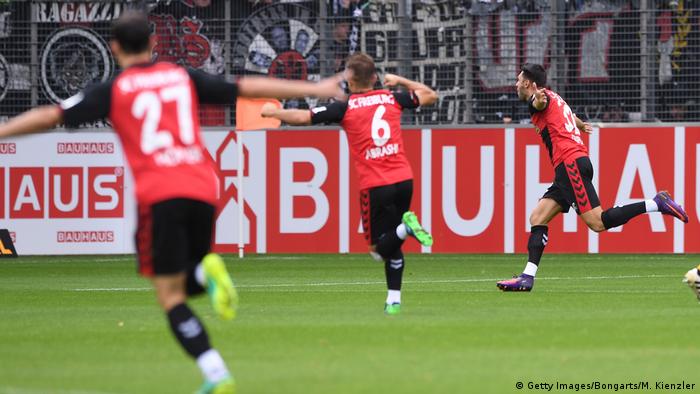 Freiburg ground out a much-needed win and checked Frankfurt's impressive early season run thanks to a very early goal from Vincenzo Grifo, also his first in the Bundesliga.

Onur Bulut picked up the ball after a Frankfurt defensive error and sent Grifo clear, who steadied himself and curled the ball into the far corner.

Freiburg almost doubled their lead eight minutes into the second half when a rasping drive from midfielder Mike Frantz clipped the top of the crossbar.

Freiburg are 10th on nine points, one fewer than ninth-placed Frankfurt.

Record-setting Leipzig up to third after beating Augsburg

Record-setting RB Leipzig continued their impressive start with a 2-1 win at home to Augsburg that lifted them to third place. They became the first Bundesliga debutants to avoid defeat in their opening six matches. (01.10.2016)