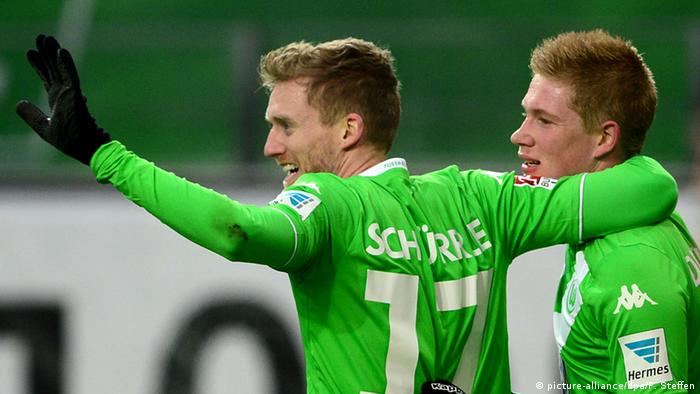 It was the major signing of the winter break: Andre Schürrle's 30 million euro transfer from Chelsea to second-placed Wolfsburg. But Wolves fans had to wait until the 76th minute of round 27 for their new acquisition to finally strike pay dirt. Playmaker Kevin de Bruyne pushed on a long ball by keeper Diego Benaglio, and Schürrle showed the technique that once made him one of Germany's most highly-regarded players.

Schürrle's strike completed the scoreline in Wolfsburg's 3-1 win over last-placed Stuttgart, but the cellar-dwellers will feel somewhat hard done by. Ricardo Rodriguez may have put the hosts up in minute 41 with a penalty, but Stuttgart responded nearly immediately with a Martin Harnik header to level the score at half-time.

Stuttgart remained arguably the better side after the whistle. But they were undone in the 65th minute by a Rodriguez free kick from long distance, which froze keeper Sven Ulreich and sailed over friend and foe into the net.

That set the stage for Schürrle to salt away the result. The 3-1 win was hardly the Wolves' most scintillating performance, but it does bring them a step closer to direct qualification for the Champions League. By contrast, the result keeps Stuttgart in last place for another week. 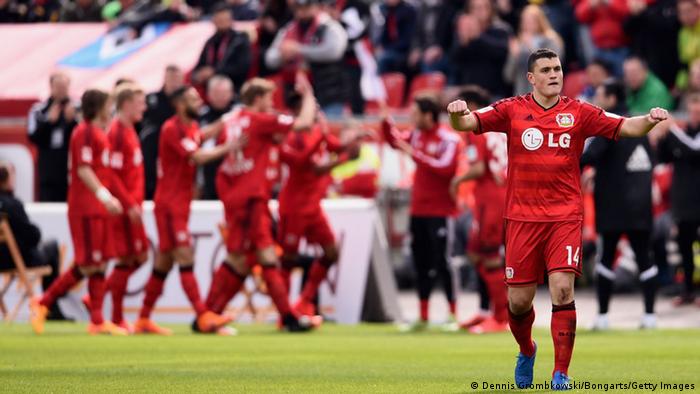 Hamburg rolled in to Leverkusen on Saturday with a new coach, former sports director Peter Knäbel as a replacement for Joe Zinnbauer. But, despite a new boss calling the shots, HSV got rolled over.

There were no signs of improvement by the northern Germans, who managed a grand total of one shot on goal in the first half. Leverkusen jumped out to an early lead after just seven minutes, with Gonzalo Castro punishing a blunder by Hamburg defender Heiko Westermann. And just before the half, Castro turned provider for Stefan Kiessling who doubled the hosts' advantage.

It was the veteran striker's first goal since round 19, and he wasn't done. After a comically incompetent attempt by Hamburg to clear the ball, Castro picked out Kiessling again, and the score was 3-0. Kiessling now has six goals in the season.

And man-of-the-match Castro wasn't content with the scoreline either, adding another goal of his own just after the hour mark to complete the 4-0 drubbing.

Leverkusen tightened their hold on fourth place and the final Champions League spot, while Hamburg remain mired in the drop zone. 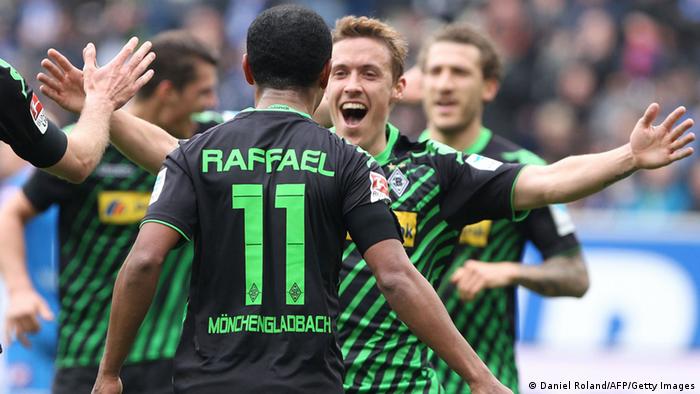 The Foals showed character to overturn a deficit against Hoffenheim

Gladbach come from behind

In other early Saturday matches, third-placed Mönchengladbach also grabbed three points with a 4-1 comeback in Hoffenheim. The hosts drew first blood in minute 17 with Roberto Firmino setting up Sven Schipplock. But the Foals stormed back with three first-half goals of their own courtesy of Max Kruse, Patrick Herrmann and Raffael. Herrmann completed the scoreline early in the second half to keep Gladbach on course for the Champions League.

Hannover also came from behind to earn a 2-2 draw in Frankfurt. The Eagles jumped out in front after goals by Alex Madlung and Stefan Aigner. But 20 minutes from time Marcelo scored a curious goal with his gluteus maximus, and fan favorite Didier Ya Konan snatched a point when he found his range in minute 82.

There was no comeback in Freiburg though. The hosts beat Cologne 1-0 after a Mike Frantz goal in minute 37. The afternoon's other early match, Bremen versus Mainz, ended goalless.