Bulgaria′s presidential election is a test for the political status quo | Europe| News and current affairs from around the continent | DW | 13.11.2016

Bulgaria's presidential election is a test for the political status quo

Bulgarians have begun voting in a high-stakes presidential runoff. Prime Minister Boyko Borisov vows to quit if his handpicked candidate - now trailing in the polls - fails to secure a victory. 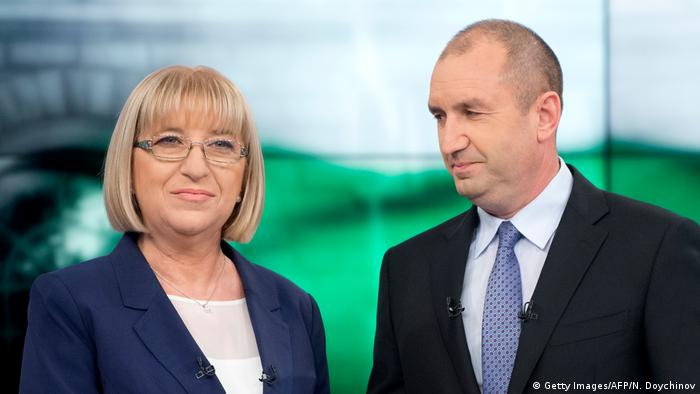 The opposition candidate in Bulgaria is leading the presidential elections, if exit polls are to be believed. Prime Minister Boyko Borisov's candidate came in second. (06.11.2016)

The Balkan country's tough-talking premier, Boyko Borisov, has vowed to resign if his protege Tsacheva fails to secure a majority of votes in the contest against Radev, a former air force chief and Socialist candidate seen as close to Moscow.

A newcomer to elected office, 53-year-old Radev stunned pollsters by sweeping 25.44 percent of the vote to Tsacheva's 21.96 percent in the first round of the election on November 6. A win for Radev could signal a change in direction from outgoing President Rosen Pleneviev, a strong critic of Russia.

Bulgaria and Russia have deep historical, linguistic and cultural ties, and Bulgaria's economy is heavily reliant on Russian energy. Radev, a general who trained in the United States, has repeatedly insisted that "being a member of the EU and NATO does not mean that Bulgaria must be an enemy of Russia."

Government popularity on the wane

If Borisov, whose party has triumphed in all national elections in the last decade, makes good on his pledge to resign, it would open the way to early parliamentary elections. Halfway into its four-year term, Borisov's coalition government has managed to restore political stability after months of anti-corruption protests, but its popularity has faded due to the slow pace of reforms.

Recent polls show Radev is still the favorite as voters seek to punish the government over its perceived failure to tackle rampant corruption and poverty in the European Union's poorest member state.

Tsacheva, 58, has vowed to keep Bulgaria on a pro-European path and accused her rival of being a "red general" - a reference to Moscow's place as capital of the former Soviet Union, which dominated post-World War II Bulgaria up until the collapse of communism in Eastern Europe. But in an embarrassing setback for the popular Borisov, who became prime minister for the second time in 2014, she has failed to inspire voters, being widely perceived as lacking in charisma.  Fresh elections are likely to plunge Bulgaria into renewed turmoil, with opinion polls suggesting that Borisov's GERB party would fail to win an outright majority in early elections.

The post of Bulgarian president is largely ceremonial, but its holder is nonetheless a respected figure and commander-in-chief of the armed forces.

Polls close at 8 p.m. (1800 UTC) with results expected late in the evening or early Monday morning.