Bulgaria's conservative GERB party of ex-premier Boyko Borisov has fallen far short of a majority in Sunday's election. It will likely struggle to find partners in the coalition it must now form. 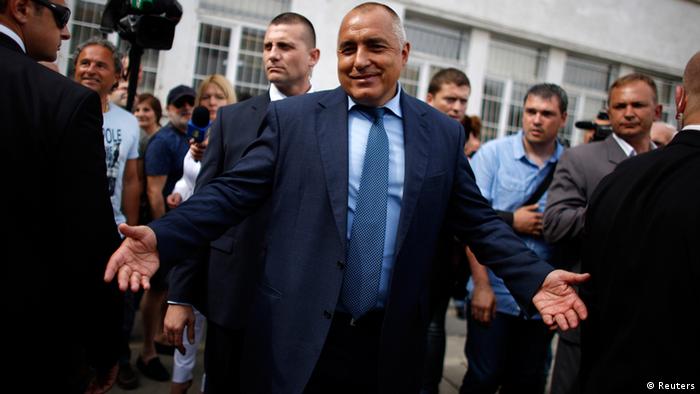 With almost all of Sunday's ballots counted, the central electoral commission announced Monday that the center-right Citizens for European Bulgaria (GERB) party is leading with about 31 percent, followed by the opposition Socialists with 27 percent.

Only two other parties entered the 240-seat legislature: the ethnic-Turkish MRF with about 10 percent and the nationalist Ataka with just over 7 percent, according to results.

The parliamentary election in Bulgaria on May 12 has been marred by allegations of fraud and political manipulation - which could have an impact on the final outcome. (12.05.2013)

Borisov's GERB party must now seek to form a coalition; however, it will likely struggle to find partners.

The other parties have said they are reluctant to cooperate with the conservatives. If GERB fails to form a ruling coalition, the mandate will pass to the Socialists who have said they would look to ensure Borisov does not return to power.

Before stepping down in February, GERB had been in power for four years and had run a minority Cabinet. The party's deputy leader, Tsvetan Tsvetanov, said GERB would once again consider a minority government with backing from others.

"Our leader is capable of proposing and forming a government - it could be a minority one," Tsvetanov said.

Sunday's snap election was called after Borisov stepped down amid poverty and corruption protests in February, but the campaign leading up to it did little to restore the public's faith in the political elite.

There has been much political mudslinging in a scandal-ridden campaign that included allegations of wiretapping. Police seized 350,000 counterfeit ballots on Friday, fueling fears of corruption and fraud just two days before the election.

At just 53 percent, voter turnout was the lowest in Bulgaria's post-communist history.

On Sunday, more than 100 demonstrators tried to storm the main press center in the country's capital, Sofia, clashing with police.

Bulgaria joined the European Union six years ago, and it remains the block's poorest member.

The country suffers from low wages, with more than 22 percent of Bulgarians living below the poverty line. On average, Bulgarians earn just $524 (400 euros) a month, the lowest in the EU.