Early exit polls showed Bulgarian President Rumen Radev ahead of his rival, academic Anstas Gerdzhikov, in the decisive runoff round of the presidential vote. 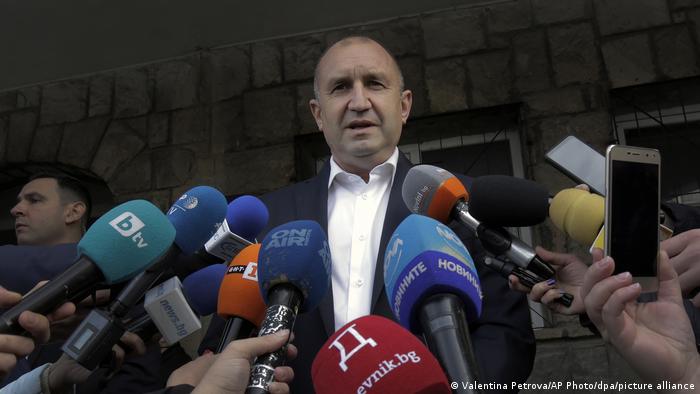 Bulgarian President Rumen Radev is projected to win another term with nearly two-thirds of the vote, according to exit polls published after the Sunday election by Alpha Research and Gallup International.

He was facing Anastas Gerdzhikov in the runoff round, after falling short of the required 50% support in the first round held last weekend.

The 58-year-old president campaigned on an anti-corruption message. He is broadly aligned with other non-corruption forces in the country, including the newly founded "We Continue the Change" party which placed first at the recent general election.

After casting his vote on Sunday, Radev said he wanted to continue his mission of change.

"Let's not give the past a chance to undermine our future," he said. "Let us decide our destiny and our future ourselves, and not give others a chance to decide instead of us."

Who are the presidential candidates?

President Rumen Radev, a former fighter pilot, secured 49% in the first round and was considered the frontrunner entering the Sunday vote.

Radev has the backing of the Bulgarian Socialist Party, and is a fervent critic of former Prime Minister Boyko Borissov.

Borissov is the leader of the center-right GERB party which has battled allegations of corruption.

Radev has in the past sought to maintain close ties with Russia, but he seems to have turned around perceptions that he is pro-Russian. "Radev is no longer considered a Moscow man," Gallup analyst Parvan Simeonov said.

His rival, independent candidate Anastas Gerdzhikov, received only 23% of votes in the first round.

Gerdzhikov is rector of the University of Sofia and is backed by Borissov's conservatives. The academic is a strong supporter of the country's Western alliances and supports reforming the country's judiciary and wants to improve the business environment.

Election seen as critical for fight against corruption

Some believe that another win for Radev, who first took office in 2017, may bring about a level of political stability.

The election, combined with the general vote last weekend, is likely to play a key role in the way Bulgarian society will tackle corruption which one of the toughest challenges facing the EU member.

"This vote is a clash between two visions: the soft tolerance of endemic corruption and the firm opposition to a model of governance that uses public power for private purposes," political science professor Antoniy Todorov from the New Bulgarian University wrote in a blog post.