Authorities have caught some of the team of robbers that hit the Bulgari store in Paris. Located in the heart of French luxury, Place de Vendome, it is the third such heist this summer. 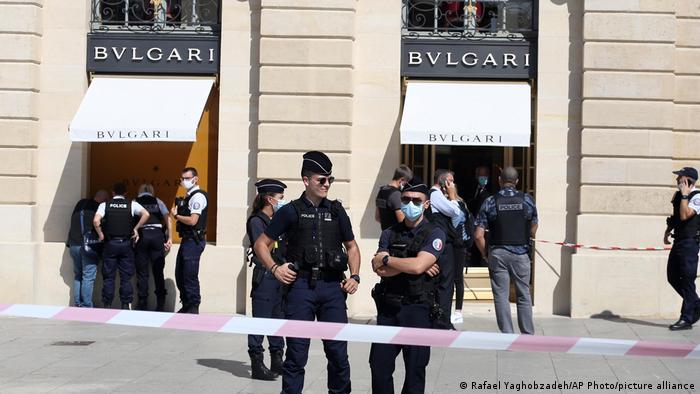 Police said Tuesday they had apprehended two robbers who were part of a larger gang that made off with €10 million ($12 million) in jewelry during a heist at the newly renovated Place de Vendome Bulgari store in the French capital.

"The police, informed around 12:00 of a possible robbery place Vendome, took in pursuit a car, with three occupants, and two scooters," a police source told AFP.

The getaway car, a gray BMW, was abandoned in the fourth district of Paris. Of the two perpetrators involved in the heist who were arrested, one was shot and wounded in the leg while the other took refuge in an underground parking facility beneath Forum des Halles.

The Paris Prosecutors' Office said the Repression of Banditry unit of the Paris Judicial Police had opened an investigation for "armed robbery in an organized gang” and "criminal association."

An officer identified as Noura B. told Reuters, "It's not the first time Place Vendome is targeted," but she added that "using large guns, taking that kind of risk," is the sort of thing  "that happens rarely."

The Bulgari heist is the third such jewelry store robbery in Paris this summer.

On July 27, a man on a scooter stole €2 million worth of jewelry from Chaumet. He was arrested along with his accomplice the next day and most of the stolen items were recovered.

Three days later, two men armed with a stun gun and a tear gas cannister made off with €400,000 in jewels from Dinh Van.

The security of digital assets has been thrown in sharp focus after a huge theft of around $600 million took place on a decentralized network. The lack of protection for those affected is clear.