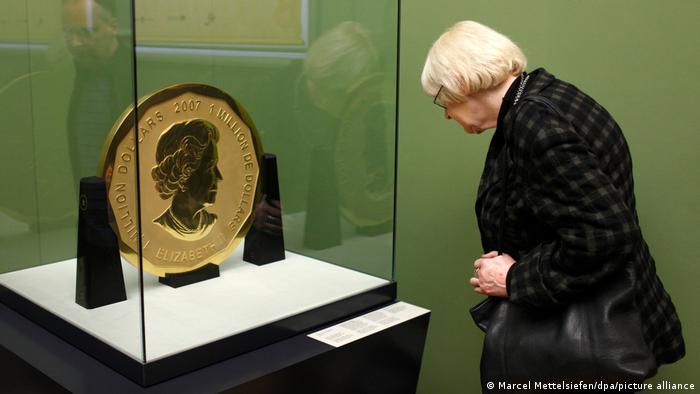 The 'Big Maple Leaf' on display at the Bode Museum in 2010. Thieves nabbed the coin with the help of a security guard at the site

A German federal court on Tuesday rejected the appeal of two defendants who had been jailed for stealing a massive gold coin from Berlin's Bode Museum.

The court in the city of Leipzig concluded that there were no "legal errors to the disadvantage of the defendants" in their February 2020 sentencing and, as such, their prison terms were found to be legally binding.

In total, three men were convicted of stealing the coin. Two defendants, aged 23 and 21, were tried as juveniles and were handed four and a half years in prison. The third convicted defendant, a 21-year-old, was sentenced to three years and four months.

Two of the defendants were from an organized crime clan and were known to law enforcement before the theft.

The other man worked at the Bode Museum as a security guard and was found to have helped the other two gain entry to the facility.

Second-largest coin in the world

The solid gold coin, dubbed the "Big Maple Leaf," was one of a set of six made by the Royal Canadian Mint in 2003.

They were thought to be the world's second-largest coins, weighing roughly 100 kilograms (220 pounds) and with an estimated value of around €3.75 million (roughly $4 million).

Authorities have not yet recovered the coin and police believe it was melted down and sold. Traces of the gold were found in the defendants' clothing and belongings.

The German government announced in May that it had created a program to improve security at select museums.

The move was in response to a growing number of thefts targeting valuable artifacts and works of art, with probably the most famous other example being the robbery of Dresden's Green Vault.

Some €5 million would be allocated to improve security for 41 projects in 11 of the country's 16 states, Culture Minister Monika Grütters said.

A Lebanese organized crime family is said to be behind the spectacular theft of a giant Canadian gold coin - "the Big Maple Leaf" - from a museum in Berlin. But who are the "family R?"