Nationwide protests were held this week in Nigeria to mark the funeral of two priests and 17 church members in Benue State. The government must do more to protect the people, Nigeria's Catholic bishops say. 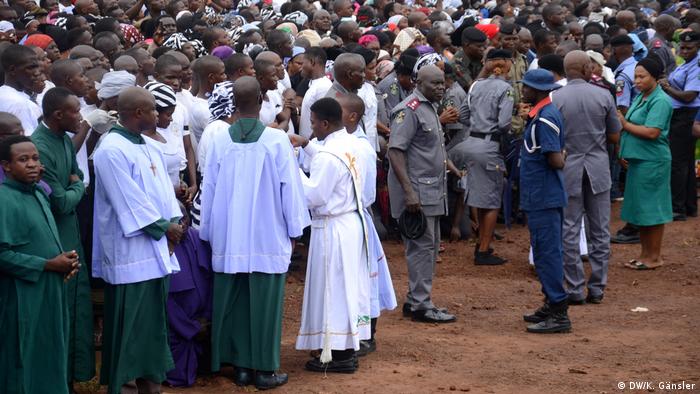 Felicia Tabo slowly makes her way through the crowds of people. "I came all the way from Abuja," Tabo says, pushing her way closer to the altar to see the white coffins of the two priests and 17 church members who were killed by gunmen on April 24, 2018. "I heard [the news] after morning Mass. They announced it in the church and I almost fainted. What I've been hearing from foreign countries, happened in my own country," she says in disbelief. "So I said, let me come down and witness it." Her journey to the funeral service in Gwer in Benue State took five hours.

Like Tabo, tens of thousands of Nigerians followed the call of the Catholic bishops. They held services and protest marches all over the country.

The attack on the church was the latest in a series of clashes between farmers and herders in the region that have left hundreds of people dead over the past few months. The murder of priests and church members was blamed on herders belonging to the Fulani ethnic group. In retaliation to the church attack, 11 people were killed.

Read more: Nigeria's communal violence - It's about more than land

'Where are we safe?'

Makurdi, the provincial capital of Benue State, saw the largest protests. State governor Samuel Ortom and Nigerian Vice President Yemi Osinbajo also paid their respects to the victims of the attack. The recurring attacks have, however, made people very skeptical of the government's efforts to address insecurity. Last month, Nigerian lawmakers even called on President Muhammadu Buhari to appear before parliament to explain how he intends to address the crisis. "If we aren't even safe in the places where we pray, how can we feel safe anywhere else?" asked Cardinal John Onaiyekan, Archbishop of Abuja, in his sermon. 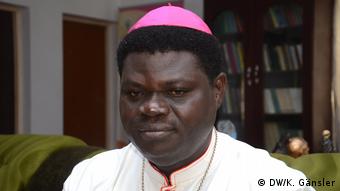 Bishop Anagbe: 'Buhari was elected as the president of all Nigerians'

The memorial services and the protests are the church's strongest criticism of the Nigerian government to date. "[President Buhari] should wake up to his responsibilities. He was elected as a president for the people of this country, not for any particular group, not for any tribe," said Wilfried Chikpa Anagbe, bishop of the Makurdi diocese, where the attack took place. "He is the president of Nigeria as a nation with about 200 million people, Christians, Muslims, Hindus, pagans."

Church no longer behind the government

Without the support of the Catholic Church, the government could lose one of the most influential bodies in the country. While there are no recent figures on membership numbers, especially in comparison to the growing membership of free churches, some bishops are still seen as important moral authorities by Nigerians of  various Christian denominations as well as by some Muslims. 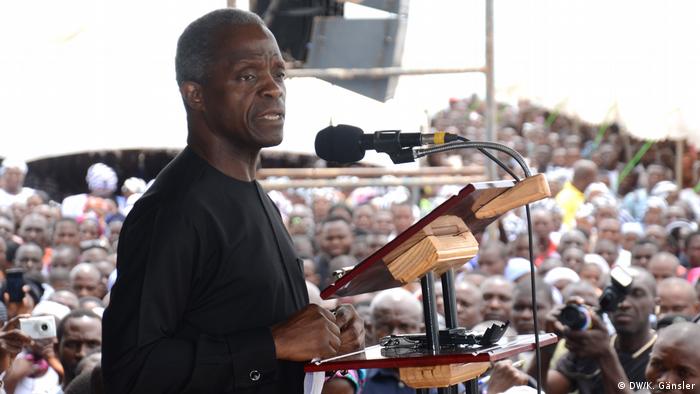 Vice President Osinbajo: 'We will and must stop these senseless killings.'

"The Nigerian church has supported Buhari firmly. When he came we agreed with him on his war against corruption and indiscipline." said Bishop Anagbe. Since 2015, when Buhari came into office, he had regular meetings with the religious authorities. "When he started deviating, we said this will not work. In February this year, the administrative board met him and gave him all the proposals." Things need to change immediately, the bishops told him.  After the killing of the priests, some senior church members even called for Buhari's resignation.

The main point of conflict with the government is its handling of the crisis between farmers and herders. The latter belong to the Fulani ethnic group. According to Anagbe, this is no longer a simple dispute over grazing and farmland. "We want to know who is behind this. How can a simple herder afford such weapons?" Anagbe asks. 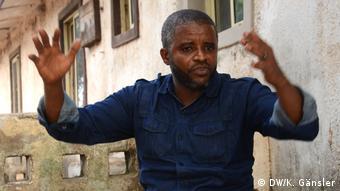 But the church's message is not welcome everywhere. The Fulani feel stigmatized. Time and again they have been equated with terrorists and the entire ethnic group is being blamed for the attacks. Cattle herders don't want a crisis either, says Shettima Mohammed, secretary of the herders' association Miyetti Allah in Benue State. The problem has become so big, that even a simple Fulani taxi driver who is not part of the conflict can be stigmatized because of his heritage. "He is the first loser. He is the first one who will never get to peace and rest of mind," he adds.

Mohammed fears that relations between Benue's herders and farmers could deteriorate even further. He has mixed feelings about the funeral services. "The last time, such burials resulted in killings. The hatred will grow," he says. Hate messages on social media, he adds, might fuel the crisis even further. People would say: "Look what these herders did."

People in two of northeastern Nigeria’s six states say militants with ties to Boko Haram are still in control of areas despite the federal government’s unwavering stance that it has defeated the Jihadist militant group. (19.05.2018)

Whether in Mali, Niger or Nigeria, the nomadic Fulani herders often find themselves in conflict with farmers over scarce resources. But there is more to it than that: Often it becomes a struggle for political supremacy. (07.05.2018)