Budget rift harks back to US Civil War

If Republicans and Democrats can't reach a compromise in the coming hours, the US economy could default. Though Obamacare ostensibly caused the political rift, the conflict also has historical roots. 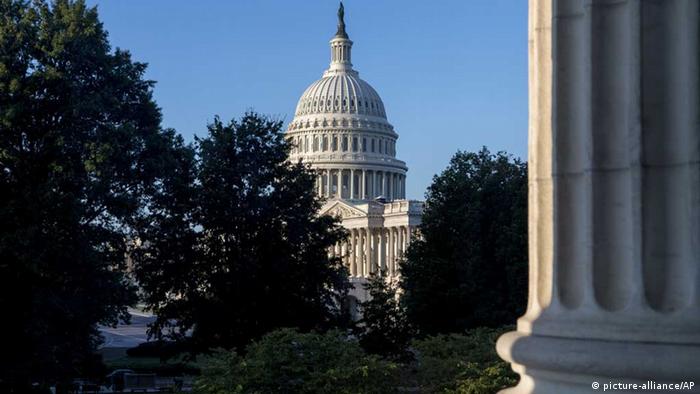 The days of the US Civil War, when the southern Confederate States were fighting the northern Union States, are long gone. But according to Stephen Richter, who publishes the Internet magazine "The Globalist," the conflict continues to this very day. "Beyond the current issues, you have to be aware that the people who are against Obamacare nowadays and are trying to block the budget come from the states that used to stand for the preservation of slavery," he says.

Richter points out that during the Civil War, 11 states opposed slavery, while today 10 of the same states oppose universal health care measures that would benefit the poor. "That's all the Confederate States, with the exception of Arkansas," he says. "The conflict of 1865, which is when the Civil War officially ended, continues to this day," explains Richter, a lawyer who has been living in the United States for 30 years.

According to Richter, the current budget impasse is just a proxy war. "It's about the fact that this country is changing," he says, explaining that the African Americans, Hispanics and Asians that used to be in the minority in the United States now make up half of newborn babies and children. 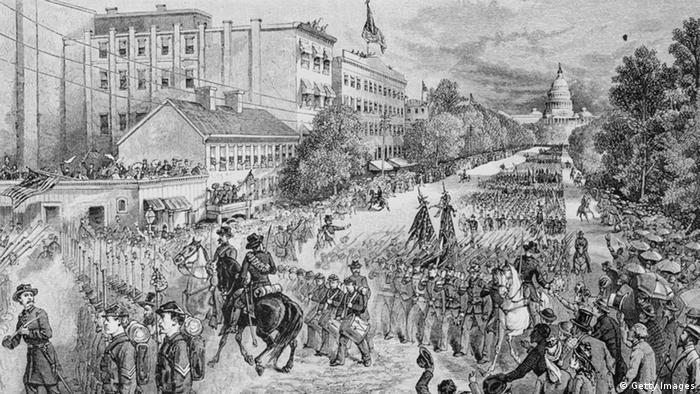 "In the southern states, the old, white men, who have lost their jobs in manufacturing industries, are seeing that the country's structure is going through profound changes - and people aren't ready for that," Richter comments. He says that is why people's anger is being channeled at a black president, who is seen as a socialist. "These are just superficial games. The only thing this is about is trying to prevent change in the United States - sociological and social change."

Political scientist James Thurber agrees. According to Thurber, who is director of the Center for Congressional and Presidential Studies at the American University in Washington, the Confederate States in the South were originally ultraconservative Democrats who became Republicans as party lines were redrawn. 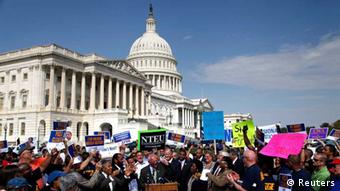 Furloughed federal workers are demanding an end to the government shutdown

"So it is likeminded individuals from the south who are against a large federal government, against the affirmative care act," Thurber says.

In cases such as the current budget impasse there are very few possibilities for compromise nowadays, according to Thurber, because of a lack of moderate politicians in Congress: "Thirty years ago Congress had about a third of the House and the Senate that could be called moderates. And they were the key blocks to try to get things done," he says, adding that "right now, it's only 2 percent," - the same proportion of moderates as in 1860, as he is keen to point out. 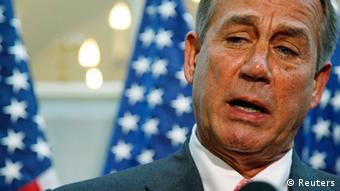 John Boehner, the Republican speaker of the House of Representatives is attempting to appease radicals

The process of gerrymandering, in which electoral districts are re-determined every 10 years after a census, is further radicalizing the US political scene. During this process, the party currently ruling in a state redraws the electoral districts' borders, taking care to include its voter base in order to guarantee the respective party a secure majority.

That is why only US primary elections, during which parties decide on their candidates for upcoming elections, can still have a surprising outcome. That's because primaries draw very few voters, but are popular with the radical fringes. As a result, even 2,100 votes can be a candidate's ticket to Congress, as was recently the case for a Senator from Utah. Thurber explains that in primaries, candidates "are elected by people from the far right or far left," who "do not reflect the view of the American people generally."

Only very few states have a different electoral procedure - California, for example. In those states, commissions monitor the electoral districts to provide a healthy mix, which in turn provides for healthy competition. But Thurber thinks that isn't good enough, since there are only 50 seats in the House of Representatives that candidates actually compete for.

The publisher and editor-in-chief of "The Globalist" Richter agrees that only reform can turn such a radicalized playing field into a level one. "This country, if it wants to unite, has to uniformly have electoral districts, which an average cross section of the population lives in," says Richter. "That way, we can prevent just having liberal districts and ultra-conservative districts, which continue to split this country in way that is eating away at the founding principles of the United States." 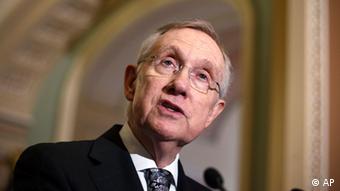 Meanwhile, many radical government critics are seeing their political tendencies confirmed by the split over the budget. They dream of secession from the federal government with its regulations and laws, and hope for self-determination and independence from restrictive health insurance and gun laws. In Texas, ultra-conservative circles have already started referring to the "Republic of Texas." Eleven rural districts of Colorado are also already planning their own "New Colorado" and there are musings over secession in Northern California, where activists blame the state for concentrating its energy on Silicon Valley and Los Angeles.

Richter warns that these tendencies, too, are historical. "What the Civil War was about - distancing yourself from the Union States - has now become a national phenomenon that extends far further than the southern states," he says.

Anger, concern ahead of possible US default

Americans are angry and worried as the deadline in the US budget crisis draws near. US lawmakers meanwhile seek a last-minute deal to avert a default on US obligations and to reopen the government. (15.10.2013)

The US has brought itself close to another self-inflicted fiscal crisis, with the government in shutdown and Congress flirting with default. The volatility could undermine confidence in the dollar as a safe haven. (14.10.2013)

The budget battle in the United States signals a serious breakdown in political discourse. For DW's Jefferson Chase, the ultimate problems are flaws in the political process that reward lunkheaded intransigence. (14.10.2013)