Bubba Wallace: NASCAR insist there was a noose despite FBI ruling no hate crime

US authorities said no charges will be filed after NASCAR's only black driver Bubba Wallace found a noose hanging in his garage stall. But NASCAR insist the noose "was real" and say they were right to protect Watson. 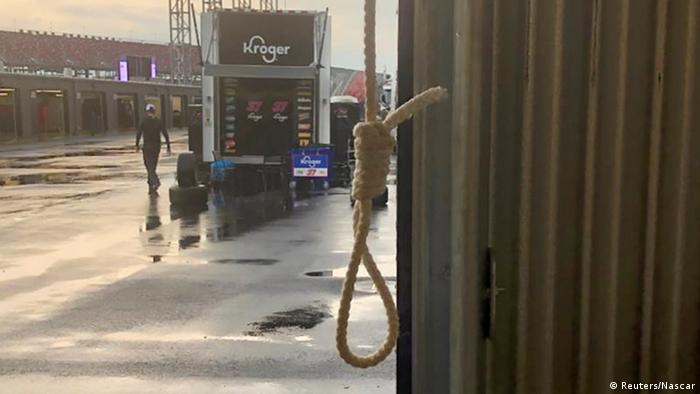 A noose that was found hanging in Bubba Wallace's garage stall prior to a NASCAR race was not evidence of a federal crime, US investigators said on Tuesday.

"The FBI has completed its investigation at Talladega Superspeedway and determined that Bubba Wallace was not the target of a hate crime," NASCAR said in a statement posted on Twitter earlier this week.

Wallace, who is NASCAR's only full-time black driver, was assigned the garage stall last week ahead of the NASCAR Cup race that was scheduled for Sunday.

The FBI investigation into the incident found that the pull rope, which was fashioned like a noose, had been hanging in the stall "as early as October 2019."

But NASCAR President Steve Phelps said on Thursday that the noose "was real" and while the series' only black driver wasn't targeted in a hate crime, officials' concern for him was warranted.

"Upon learning of and seeing the noose, our initial reaction was to protect our driver," Phelps said. "We're living in a highly charged and emotional time. What we saw was a symbol of hate and was only present in one area of the garage and that was of the 43 car of Bubba Wallace.

"In hindsight, I should have used the word 'alleged' in our statement," added Phelps, who on Sunday night described the incident as a "heinous act."

"As you can see from the photo, the noose was real, as was our concern for Bubba," Phelps said. Bubba Wallace is the only full time black driver in NASCAR

Wallace had previously said he accepted the FBI’s findings, but defended his and his team’s integrity.

Wallace didn’t report the noose himself but a team member discovered it and informed NASCAR.

"The image that I’ve seen of what was hanging in my garage, is not a garage pull," he told CNN.

"I’ve been racing all my life, we’ve raced out of hundreds of garages that never had garage pulls like that.

"It’s a straight up noose. The FBI have stated it was a noose over and over again.

"Whether it was tied in 2019 or whenever, it was a noose. It wasn’t directed at me but somebody tied a noose."

Wallace said he was "mad" that people were questioning his character after the FBI investigation.

The incident sparked outrage in the racing world and beyond, coming at a time when anti-racism and anti-police brutality protests are sweeping the US.

Wallace successfully campaigned for NASCAR to ban the Confederate flag at racing events and voiced solidarity for Black Lives Matter protesters, wearing a shirt over his firesuit that read: "I can't breathe."

At a race on Monday, fellow NASCAR drivers came out to support Wallace, rallying behind him at the starting line.

The Confederate flag ban sparked discontent with some of the league's fans, and security for Wallace has been stepped up in recent weeks.