Brussels - for artists, the new Berlin?

With renowned galleries opening branches in Brussels and ever more young artists flocking to the Belgian capital, the city has been termed the "new Berlin." Andrea Rönsberg went to find the truth in that. 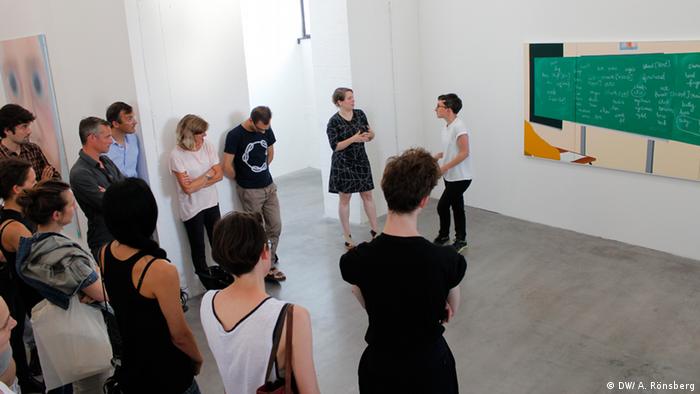 Around 40 people are gathered in a half-circle around Marnie Slater to listen as she explains the painting she has made for this exhibition. It is the last guided tour through the exhibition titled "Un-Scene III" at Brussels' center for contemporary arts, called Wiels.

The exhibition shows the works of 13 young artists in or from Belgium, and Zoë Gray, who co-curated the exhibition, says it was hard to make a choice. "There is such a richness and diversity of artists working in Belgium that it was difficult to draw the line," she says. In the end, all artists that were selected for the exhibition, except one, are based in the city.

A city that doesn't belong to anyone

Marnie, a native of New Zealand, came to live in Brussels three years ago. "I really like the sense that things are possible here that can't happen in other European capitals anymore," she says. "Like, for instance, appropriating unused space. Here, if you put up an exhibition at your house, 200 people will come."

"Brussels really doesn't belong to anybody, it's a completely anarchic city," says Erika Hock, another young artist who has moved to Brussels and whose work is shown in the "Un-Scene III" exhibition. 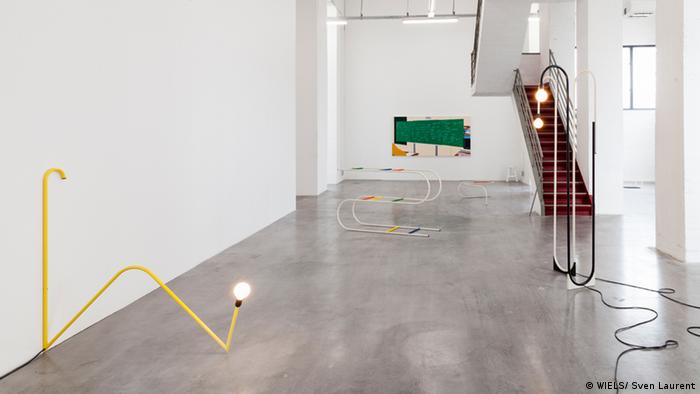 Sculptures by Erika Hock at the "Un-Scene III" Exhibition, with Marnie Slater's painting in the background.

Frederic de Goldschmidt, a French collector who is based in Brussels, doesn't use the term "anarchic" but agrees that the city is a little "disorganized": "Here, things happen in a haphazard way," he says."It is not as organized as in Paris, where the national and regional art centers buy art, and there are committees that buy art, and artists can receive a certain amount of money by the welfare state. Here in Brussels, there is almost nothing of this kind."

This "disorganization" seems to provide fertile ground for non-profit art spaces that offer emerging artists a chance to exhibit their works, or that invite artists to create new works. There is also an independent art fair called "Poppositions" which takes place at a different location each year. This year, the fair set up shop in a vacant building owned by an insurance company which had allowed artists to work in the building along the canal. "They are going to tear the building down in a year,", says de Goldschmidt, "but they decided that rather than just leaving the building empty, they would allow artists to have their studio there."

Famous galleries, and an international crowd

However, it is not just the non-profit scene that draws artists here. Several galleries have opened in Brussels over the last years, and most notably, renowned ones like Barbara Gladstone from New York and Almine Rech from Paris set up branches here. "That was a decisive moment," says Frederic de Goldschmidt.

Another such moment, he adds, was the opening of the Wiels contemporary arts center in 2008, which also offers residencies to emerging artists every year, providing them with a work space as well as a training program. 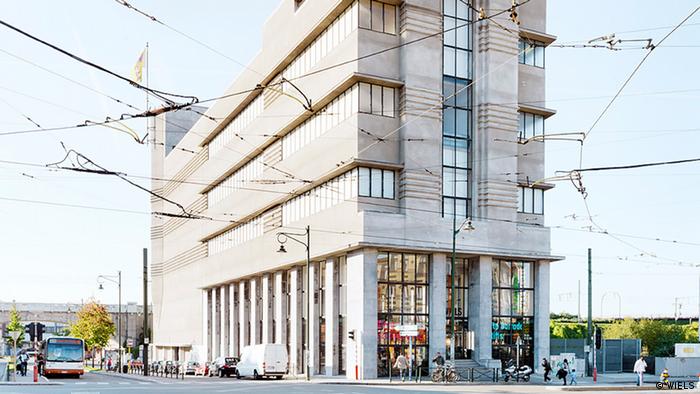 The Wiels Contemporary Art Center is located in a former brewery.

"This is becoming one of the most sought-after residency programs for artists in their 30s," says de Goldschmidt. "I don't think that that is because of the funding because they don't get a lot of money, but the studio space is really nice and it is also the contacts with the other artists and the quality of discussions with the tutors in the program that make it very attractive."

Some of the alumni of the program, who come from all over the world, have stayed on in Brussels. "The scene has become more international," says Freek Wambacq, an artist who was born in Brussels and lived here until five years ago. 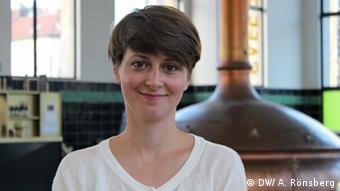 Erika Hock, born in 1981, likes Brussels for its diversity.

It is this diversity which fellow artists treasure. Erika Hock, who was born and raised in Kyrgyzstan before moving to Germany at the age of ten, was in Düsseldorf before moving to Brussels.

"Düsseldorf is the most homogenous city I know, " she says. "The artists you meet in Düsseldorf live there because they went to arts school there, almost nobody moves there after that. And in Brussels, it's the opposite. I don't know anyone who moved here to go to arts school, I only know people who moved here to take part in a residency, and then stayed on, or because they wanted to be in the center of Europe." 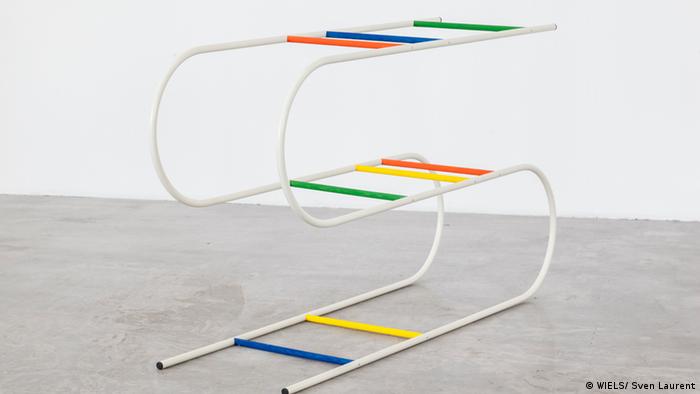 Erika Hock's work is inspired by tubular steel furniture, like the cantilever chair made popular by the Bauhaus school.

You can make art - and sell it, too

Another element drawing artists to Brussels is the fact that there are many collectors. According to de Goldschmidt, there are more art collectors in Brussels than in Berlin.

"In Berlin," says curator Zoe Gray, "although there were a lot of artists making work, and good institutions showing work, there wasn't the financial support to keep that going. People were saying that you could live in Berlin very cheaply and make works, but you couldn't sell anything."

In Brussels, by contrast, there are not only collectors, says de Goldschmidt, but more importantly, there are collectors with a wide variety of tastes.

"The art market overall in the world is getting a bit standardized with young collectors buying what other collectors like," says de Goldschmidt. "But in Belgium, we have a lot of different personalities, and they say that Belgian collectors buy with their hearts."

That gives young, emerging artists a greater chance for their works to be discovered and sold.

Just a moment in time?

For Zoe Gray, all the elements needed to make a vibrant art scene come together in Brussels. "You have good institutions, like Wiels, you have a dynamic commercial scene, a dynamic non-profit scene, and you have artists coming in and out a lot, as well as other visitors. You need all of these elements to create a dynamic art scene, and at the moment you have that here," says Gray. 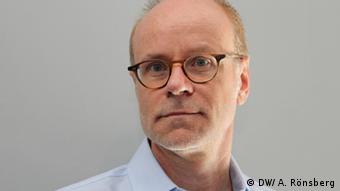 Some have voiced concerns that this moment might not last forever, that rents might go up, making Brussels less attractive for artists. But collector Frederic de Goldschmidt believes that "rents here will always be lower than Paris or London." He adds that Brussels' geographic location between other major European art cities such as Paris, London, Amsterdam and Cologne is also ideal and will remain that way.

The fact that the New York-based art fair Independent is to launch its first European edition in Brussels next year is another indicator of the fact that the Brussels art scene is not on the verge of losing its dynamism and appeal.

All of these factors, he says, are more important than whether or not Brussels can rightfully be labeled as "the new Berlin."

"This thing about Brussels becoming the new Berlin was something that started probably when some artist became disenchanted with Berlin and moved to Brussels," he says. "Now people are starting to say that Istanbul is the new Berlin." But Istanbul, he adds, is not really a competitor to Brussels given its location: "It may be more trendy, but it is not as convenient."

DW's Berlin columnists - all English-speakers who have lived in the German capital for many years - bring you an insider's perspective on cultural life in one of the world's most vibrant cities. (23.07.2015)

The art movement was considered "diseased" until Essen's Folkwang Museum rallied to the cause, buying and displaying the novel works. A new exhibition at Folkwang looks back at expressionism's early years.