A strike by one of Zaventem International Airport's baggage handling partners has resulted in widespread flight disruptions. This weekend is traditionally busy for air travel because of several holidays in Europe. 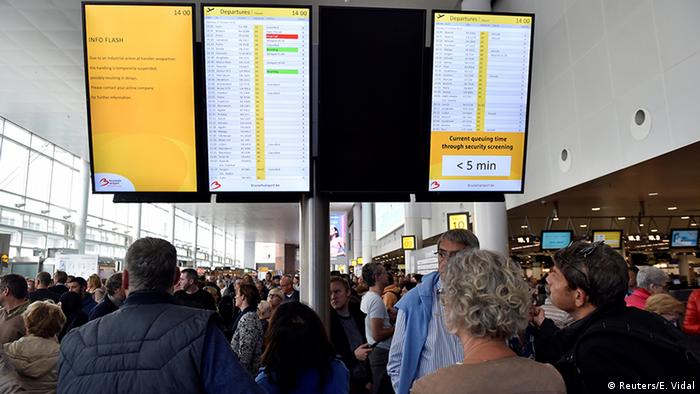 Thousands of airline passengers have been affected by an ongoing baggage handlers' strike at Brussels Airport.

The strike, by workers employed by Aviapartner, began on Thursday and is expected to continue until 6:00 a.m. Sunday morning (0500 UTC).

The strike comes during a popular weekend for air travel. It is the end of a school holiday in neighboring Netherlands and the start of the All Saints' festival in Belgium.

Management was holding talks with union delegates in an effort to resolve the dispute on Saturday.

A previous meeting ended without any agreement, according to the Belga news agency.

Frustrated passengers traveling on the affected airlines were left without their checked-in bags because Aviapartner was not retrieving luggage from the planes "until Sunday morning,"  according to the airport.

Zaventem international airport has advised passengers intending to fly on the affected airlines to travel with hand luggage only.

Some 110 of Saturday's 550 scheduled flight connections were canceled, according to an airport spokesman.

Brussels Airport's other baggage agent, Swissport, is not involved in the strike.

Ryanair cabin crew protests across Europe have caused 600 flights to be cancelled with 100,000 passengers affected. The strikes come as more than 300 Ryanair staff in Ireland are warned they may lose their jobs. (25.07.2018)

Four European airlines have complained to the European Commission over what they say is France's failure to tackle strikes by air traffic controllers. They say the strikes are hindering people's freedom of movement. (24.07.2018)

Pilots at Lufthansa subsidiary Brussels Airlines have announced strikes on Monday and Wednesday as they seek higher wages. Three-quarters of all flights were expected to be canceled, the carrier said. (14.05.2018)