Brunei Shariah law applies death sentence for homosexuality | Asia | An in-depth look at news from across the continent | DW | 27.03.2019

Rights groups are outraged as the Brunei government has announced additions to its Islamic penal code, including death by stoning and whipping. DW spoke with human rights activist Matthew Woolfe about the consequences. 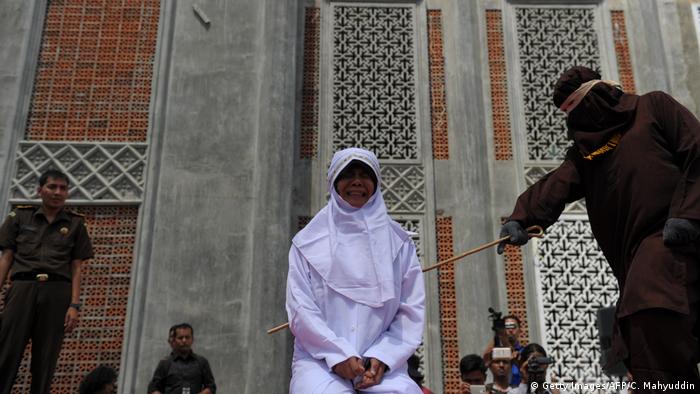 A public caning in Indonesia

Brunei, a small sultanate on the Southeast Asian island of Borneo, introduced the Shariah Penal Code in 2014. The government decided to implement the legal changes in stages, with the first round including fines and jail sentences for offenses like adultery or failing to pray on Fridays.

The more severe penalties of the Shariah Penal Code include whipping and stoning to death for Muslims found guilty of adultery, sodomy and rape. After heavy international backlash, the Brunei government delayed their implementation.

Human rights organizations, however, have confirmed that the Brunei government will fully implement the laws on April 3, 2019.

This new penal code includes brutal punishments like chopping off limbs for theft or stoning people to death for homosexual activity.

Activist Matthew Woolfe from the Australian human rights group The Brunei Project spoke with DW about the consequences of strict Shariah law in Brunei and his efforts to advocate for human rights in the country. 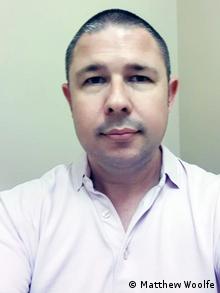 Matthew Woolfe from the human rights group The Brunei Project

DW: Is Brunei especially strict in comparison to other Asian countries?

Matthew Woolfe: It is among the worst in the region in terms of Shariah law, which isn't widely enforced throughout Southeast Asia. But we do, of course, have pockets within Southeast Asia where Shariah law has been introduced and is being implemented. Some Malaysian states are an example. But these laws aren't to the extent that they have in Brunei.

The new penal code would punish homosexual activity with stoning instead of jail. This seems especially threatening to the LGBT community.

I should point out that in Brunei, homosexuality has been criminalized since British colonial rule. People found guilty of sexual activity between people of the same sex face up to 10 years' imprisonment. Although to my knowledge, this law has never been enforced.

But these new laws create a lot of fear within the LGBT community. There is also a lot of pressure from within society itself because Brunei is a strict religious and socially conservative country. Society in general expects you to be heterosexual, to get married and have a family.

Why do you think the government has been so secretive about the sudden rush to implement the law?

I think one of the reasons is possibly that they want to fly under the radar with this. They are very aware of the reaction that implementation of the first phase of Shariah law created a few years back. There was a boycott of businesses owned by Brunei internationally. They want to avoid that scrutiny.

Additionally, the Brunei government signed the UN Convention Against Torture in 2015, but they have yet to ratify the convention. However, they have signed it, and that demonstrates that they should be upholding the principles of the convention.

Did people in Brunei ask for stricter laws?

I don't think there is a push within society itself for these laws and this is something that's being decided by the government without any consultation with the people of Brunei. There are certainly a lot of people in Brunei that don't want these laws and are very concerned about their implementation. It's unclear exactly why the government thinks that the country needs these laws.

Once the stricter penal code is implemented, will there be a Shariah police force walking the streets of Brunei?

Religious authorities within Brunei already exist, and they carry out that policing role in regards to Shariah law. They are mostly enforcement officers from the Ministry of Religious Affairs.

There are some laws that only target Muslims. In the case of adultery, a punishment does require at least one of the parties involved to be Muslim. If two non-Muslims are engaged in an act of sodomy or adultery, then they won't be subjected to punishment.

Read more: Two men may get 100 lashes after gay sex in Indonesia

Is it dangerous to speak out for human rights in Brunei? Have you ever experienced harassment there?

Unfortunately, I have been banned from entering Brunei for the last couple of years. When I was informed of my blacklisting, they didn't give me a firm reason. Diplomats in Brunei made some inquiries on my behalf, but they also were denied a proper answer. This would indicate that my involvement with the project got me blacklisted.

At the moment, I have to rely on people who are based in Brunei, and they keep a very low profile. It is necessary because if their identities were revealed, it is very likely that they would face harassment and potentially even charges under the law.

Matthew Woolfe is an Australia-based human rights activist and the founder of The Brunei Project. The organization works collaboratively with other human rights organizations throughout the region and internationally, giving opportunity to human rights advocates in Brunei.

The interview was conducted by Ann-Christin Herbe. It has been condensed for clarity.

A Shariah court in Malaysia has had two women caned for "attempting lesbian sex." Human rights groups have slammed the sentence as cruel and regressive. (03.09.2018)