Britain left isolated as EU leaders sign up to ′breakthrough′ reforms | Europe | News and current affairs from around the continent | DW | 10.12.2011

All European leaders, except Britain, have voiced support for a pact to tighten budget policing to save the euro. Britain has opted to go it alone after blocking a wholesale EU treaty change. 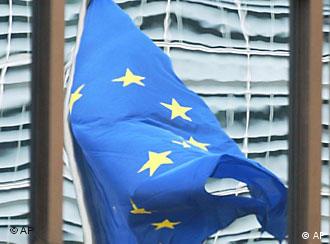 Cameron says Britain won't be isolated from the EU

British Prime Minister David Cameron stood alone on Friday in refusing to agree to a historic European fiscal pact to save the euro. As a two-day EU crisis summit came to an end in Brussels, 26 of the 27 EU leaders had signed up to pursue a tougher budget discipline regime.

"This is the breakthrough to the stability union," German Chancellor Angela Merkel told a press conference after the summit.

But critics warned Britain may become isolated from the European Union after all 17 eurozone counties, as well as nine-non euro states, said they were willing to join a "new fiscal compact" to resolve the two-year debt crisis.

"Cameron made demands that were unacceptable, even to me," Italian Prime Minister Mario Monti told reporters. "Britain has shut itself out. It will be in certain isolation."

Cameron blocked an EU-wide treaty on tighter budget policing overnight after failing to secure concessions for Britain's financial markets. He justified his rejection of the treaty saying he took a "tough but good" decision to veto changes which would have threatened Britain's vital financial services sector.

The prime minister later denied Britain would become isolated. "We are not being excluded, we are in the European Union, we're a leading member of the single market," he said.

"In terms of the future, yes of course this does represent a change in our relationship with Europe… But the core of our relationship - the single market, the trade, the investment, the growth, the jobs that we want to see - that remains as it was," he added. 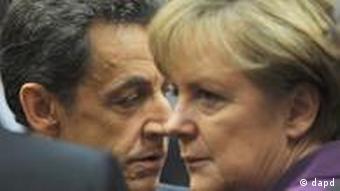 Sarkozy and Merkel had pushed for a wholesale EU treaty change

Britain had initially been allied in its opposition by Hungary, who had voiced reluctance to the deal. According to a document released on Friday, however, Hungary had joined previously undecided Sweden and the Czech Republic in indicating "the possibility to take part in this process after consulting their parliaments where appropriate."

Cameron's reluctance to sign up to a deal was largely due to pressure from both euroskeptic members of his conservative party and the right-wing press in Britain, which had urged him to hold a referendum on any treaty change.

But fellow European leaders opted to emphasize the successes of the accord. Chancellor Merkel said she was "very satisfied with the outcome" of the summit.

European Central Bank President Mario Draghi described the accord in Brussels as a "very good outcome for the euro area."

"It is going to be the basis for much more disciplined economic policy for euro-area members. And certainly it is going to be helpful in the present situation," he said.

Meanwhile, EU President Herman Van Rompuy said although it was "unfortunate" that all 27 EU nations could not move forward together, "We will make the best of it." 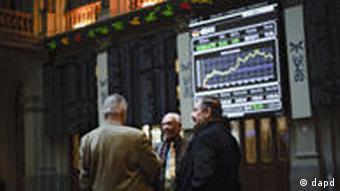 Van Rompuy detailed additional reforms within the accord early Friday, designed to stabilize the euro. He outlined a more concrete deal on EU central banks, which are to loan up to 200 billion euros ($267 billion) to the International Monetary Fund (IMF) as part of efforts to boost bailout facilities for the currency bloc.

It was also agreed to bring forward a new eurozone rescue fund, the 500-billion-euro European Stability Mechanism, by one year and put it into effect in July 2012.

Governments participating in the agreement will be required to have balanced budgets, meaning they must have a structural deficit no greater than 0.5 percent of gross domestic product.

Countries will also have to submit their national budgets to the European Commission, which will have the authority to request that they be revised. There will then be sanctions for countries that run deficits larger than 3 percent.

The European Union aims to have the pact, which will be backed by a treaty between governments, ready to take effect by March.

Opinion: EU finally gets to the root of the matter

After the latest EU summit, leaders have finally recognized they need to tackle the root causes of the financial crisis, and that the problem lies in the union's regulatory make-up, says DW's Christoph Hasselbach. (09.12.2011)

The decision to establish a European fiscal union has been made in principle. Now the experts have just three months to negotiate the finer points. What's expected to be in the new treaty? (09.12.2011)

Last year's Nobel laureate for economics says Germany must accept that the ECB has to act as a lender of last resort. But Dale Mortensen also supports Berlin's quest for fiscal unity. (09.12.2011)

EU leaders agree to fiscal pact to save the euro