Britain goes to the polls with deep divides apparent

As voters cast their ballots, British press have used scare tactics to swing the public mood. While ideological divides are deep, voter turnout may be the biggest challenge. Samira Shackle reports from London. 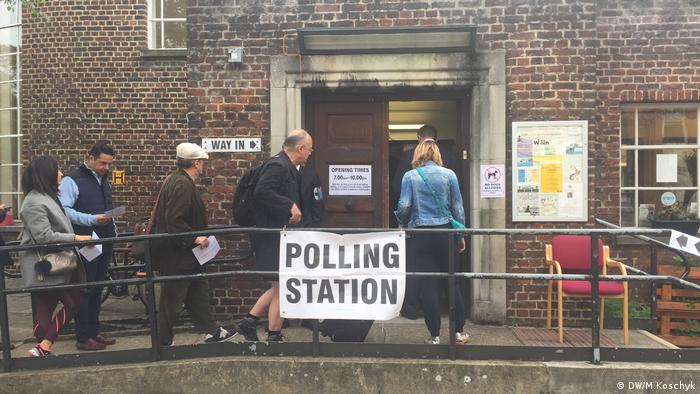 On the last day of election campaigning in Britain, the right-wing tabloid headlines spoke for themselves. "Vote May or we face disaster" was emblazoned across the front of the Daily Express. "Jezza's jihadi comrades," said the Sun's front page. "Apologists for terror," charged the Daily Mail, above a photograph of Jeremy Corbyn and two of his allies within Labour, John McDonnell and Diane Abbott.

The question is how effective these attacks will be in Thursday's vote. When the election was called, Labour trailed the Conservatives by roughly 20 percent. Now, some polls put the gap closer to three.

"The press is one of the agencies that can make a difference in the last 24 hours. To be effective, these last minute messages have to reinforce the rest of the campaign, and the Conservatives have highlighted strong leadership and Corbyn's 'extremism' for a long time," says Matthew Cole, lecturer in history at Birmingham University. "Part of it is about mobilizing voters, trying to resist complacency among Conservative supporters. Most Daily Mail readers aren't going to vote for Corbyn - but they might need persuading to go and vote." 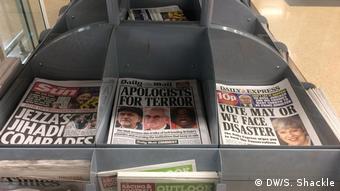 Most analysts agree that the campaign thus far has been remarkably successful for Labour after two years of internal conflict and plunging poll ratings. It has been buoyed by its vastly increased membership, with thousands of people out canvassing door-to-door. "Tomorrow, for the first time in my life, I will cast a vote that actually feels meaningful and as if it has the potential to effect real change," says Joanna Smith, who joined Labour in 2015.

Although there is significant variation in the polls, most are predicting a Conservative victory. One big question for Labour in particular will be turnout; much of their support comes from young people. "These narrower polls to some extent reflect the views of younger people, who we know are historically less likely to actually turn out on the day," says Sophie Gaston, head of international projects at the think tank Demos.

Britain voted in a general election in 2015 and the EU referendum in 2016. There is also the risk of voter fatigue and apathy, particularly given that some pollsters are now giving all three main party leaders a negative favorability rating. "To me, both options seem completely incompetent. I've always voted Labour but what are you meant to do if you want progressive policies without nationalizing everything? I never thought I'd feel this disengaged from politics," says London-based researcher Alia Malhotra.

Theresa May began the election with sky-high popularity ratings, but this has plunged in recent weeks. "Having rested the election on her credibility as leader, any flaw is particularly noticeable," says Cole. 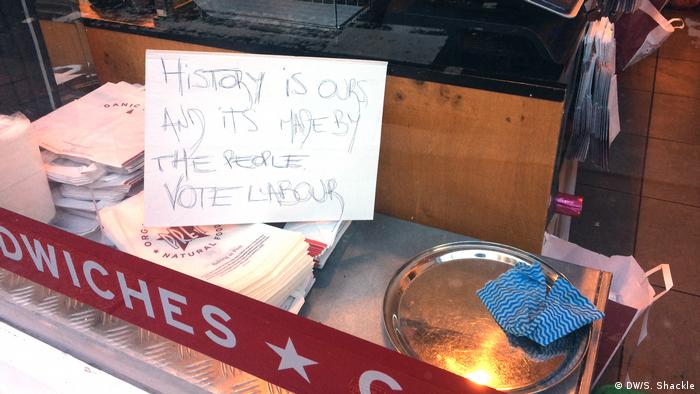 Not all the electorate is apathetic: A handmade sign in a London cafe

"And these have been numerous - her less-than-spontaneous handling of media engagement, her failure to turn up to the debate, her handling of the social care controversy."

May called the election stating that she needed a bigger mandate to negotiate with Europe. If she does not deliver that vastly increased vote-share, she faces the prospect of dissent within her own party. "It's unlikely May will not be the next Prime Minister but the position she's in and the sort of authority she can claim will be determined by the scale of the victory," says Cole.

It has been a bruising few weeks for the Conservatives, who entered the campaign certain of an enormous victory. "Voters will not forget the reputational damage the Conservatives have suffered on issues like school funding and care for the elderly," says Tom Follett, policy and projects manager for the think tank ResPublica. "Brexit has played less of a role in the campaign than May had hoped, as her campaign was based around convincing the public she would be a strong negotiator. This has helped Labour, whose voters were deeply divided over Brexit."

As Labour and the Conservatives have traded barbs over leadership, competency, security and spending, the nature of Britain's exit from the European Union has largely fallen into the background. This is a concern for some voters. "I want a party who at least wants to - never mind is able to - salvage something worthwhile from this car crash," says Jack Smith, from Kent. "Half the country voted against it. May wants to take us off a cliff-edge and Corbyn seems completely uninterested."

In Britain, tolerance and the 'acceptance' of extremism

Political analyst Dwayne Ryan Menezes tells DW that British Prime Minister Theresa May is right to start a difficult conversation about tolerance and extremism. The UK has avoided the discussion for too long, he says. (04.06.2017)

British people 'will not want to carry on as before'

The latest attack in London comes only days ahead of one of Britain's most crucial general elections in decades. DW asked political scientist Anthony Glees what bearing it might have. (04.06.2017)

Opinion: Helpless in the face of terrorism

It’s still unclear if and how the recent terrorist attack in London will influence the British election. What is clear is there are lapses both the Conservatives and the Labour Party must answer for, says Barbara Wesel. (06.06.2017)

Separately, May and Corbyn face voters during 'question time'