Britain faces its own Abu Ghraib as torture allegations surface | Europe| News and current affairs from around the continent | DW | 14.11.2009

Britain faces its own Abu Ghraib as torture allegations surface

The British Ministry of Defence says it is taking claims of torture against detainees in Iraq very seriously. Detainees claim they were raped and tortured by British soldiers. 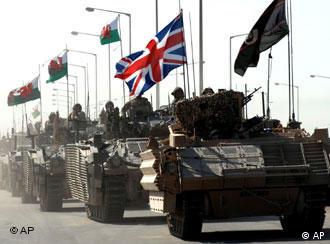 The British Ministry of Defence announced on Saturday that it is investigating allegations of abuse against prisoners of war in Iraq.

The allegations arose after British daily newspaper, The Independent, published an article in which a lawyer acting for detainees cataloged more than 30 new cases of abuse, inlcuding rape and torture.

Female soldiers were accused in the article of aiding in the physical and sexual abuse of prisoners.

The claims were being taken seriously, according to Minister for the Armed Forces William Rammell.

In a statement Rammell said formal investigations needed to take place "without judgements being made prematurely." One claimant alleges he was raped by two British soldiers while in a detention center, while a 14-year-old boy claims he was forced to perform a sex act on a British soldier. Others allege they were stripped naked, photographed and abused.

In another incident described in the article, detainees were piled atop each other and electrocuted.

The allegations of abuse are being compared to the treatment of prisoners in the Abu Ghraib where a similar scandal broke in an American-run prison in 2004.

An investigation is already underway into the death of an Iraqi civilian, Baha Mousa, who died in British custody in Basra in 2003 after sustaining 93 separate injuries to his body.

A panel of lawmakers in the UK say the government is hiding behind a "wall of secrecy" over claims that security agents colluded in the torture of terrorism suspects. They say recent allegations should be a wake-up call. (04.08.2009)

A line has been drawn under one of the most notorious episodes of Britain's involvement in Iraq when the government agreed to pay nearly 3 million pounds to "torture" victims. (11.07.2008)

The German Institute for Human Rights has called on Germany and Europe to avoid going soft on the ban on torture in their efforts to combat terrorism. (12.04.2007)