A line has been drawn under one of the most notorious episodes of Britain's involvement in Iraq when the government agreed to pay nearly 3 million pounds to "torture" victims. 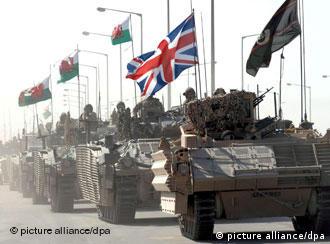 All but one of the implicated soldiers were acquitted

The Ministry of Defence (MoD) confirmed on Thursday, July 10, that it had agreed to pay 2.83 million pounds (3.56 million euros, $5.6 million) in compensation to the relatives of Baha Mousa, who died from being beaten while in British detention in Basra in September, 2003, and nine other men who suffered mistreatment by soldiers.

The pay-out was agreed during two days of "intensive negotiations" between the group and the Ministry of Defence in London, said the law firm Leigh Day & Co.

"Our clients have been through hell over the last few years and this settlement will go some way to enabling our clients to have some semblance of a decent future life," said Martyn Day, senior partner in the firm.

"The settlement is with an admission of liability by the Ministry of Defence ... for substantive breaches of Article 2 (right to life) and 3 (prohibition of torture) of the European Convention on Human Rights," the MoD said in a statement.

The death in detention of Mousa, a 26-year-old hotel receptionist, and the maltreatment of nine other men, cast a dark shadow over the conduct of British forces in southern Iraq soon after the invasion and led lawyers to call for a "broad inquiry into the British Army's detention policy."

Investigations showed that Mousa, a father of two, died from 93 separate injuries, including fractured ribs and a broken nose, after British troops raided the hotel for weapons and accused him of being an insurgent.

Mousa's father, Daoud, who has been leading the fight for compensation, told the High Court in London in 2004 that he was "horrified" by the state of his son's body, which he was asked to identify.

"I burst into tears and I still cannot bear to think about what I saw. Every time I tell this story I break down," he said.

A large part of the compensation is for Mousa's two young sons, who were orphaned as their mother died from cancer shortly before the hotel raid.

A court martial held in Britain last year heard that Mousa and the other men were tied and hooded and repeatedly kicked and assaulted by troops during the raid. Witness Ahmad Taha Musa Al-Matairi told the court martial that the seven soldiers involved in the raid took bets on who would make Mousa fall down.

"They celebrated beating him and a group of other Iraqis like it was Christmas," said the witness at the court martial.

The military trial, dismissed by critics as an "inadequate tool" to tackle human rights offences, ended in March 2007 with the acquittal of six of the men.

A seventh, Corporal Donald Payne, who admitted to having treated the Iraqis "inhumanely," was jailed for a year and dismissed from the army. But his seniors in the Queen's Lancashire Regiment, including commanding officer Colonel Jorge Mendonca, were cleared of all charges.

The prosecution alleged that Mendonca, the highest-ranking British soldier ever to face a court martial, had never "questioned the legality" of his men's conduct and allowed them to abuse the Iraqis in direct breach of human rights conventions.

When asked by the prosecution if he had heard screams coming from the building where the alleged abuse took place, Mendonca told the court martial: "I express incredulity at that comment."

Iraq was given a boost of confidence for its efforts to promote security for its citizens by almost 100 countries and organizations attending a one-day international conference in Stockholm Thursday. (30.05.2008)