Bringing the trees back to Easter Island | Environment | All topics from climate change to conservation | DW | 08.04.2015

Rapa Nui, in the South Pacific between Chile and Polynesia, is famous for its monumental head statues. Its barren landscape, to some a symbol of ecological collapse, is now the target of reforestation efforts. 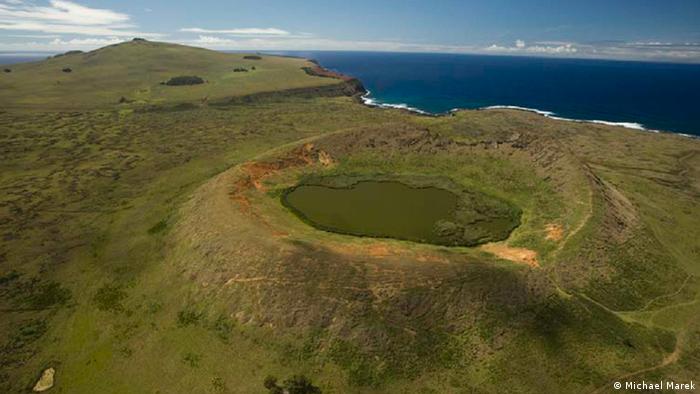 The volcanic rock on the hilly island is reddish brown, and there's a fresh coat of green grass after the rain. But apart from the recent downpour, there's little fresh water on Easter Island - not a single rivulet flows through the two volcanic lakes.

When it rains on the island, also known as Rapa Nui, the water rapidly drains through the porous volcanic soil, leaving the grass dry again. That's one reason why the island at the end of the world has stayed almost entirely bare, with no trees or shrubs.

In recent decades, a number of ventures have aimed to change this. Just less than 10 years ago, Chile's forest authority CONAF began planting the salt-resistant aito tree, which is native to Polynesian islands, on Easter Island. The species, also known as toa or ironwood, was considered sacred to the local culture and traditionally planted in places of worship.

Biologist Jorge Alejandro Edmunds and his colleagues at CONAF are investigating whether there are any other candidates beside the aito tree that could also be suitable for reforestation. 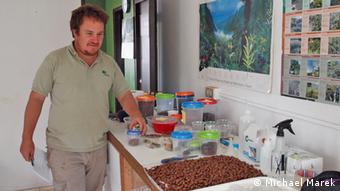 Edmunds has been testing various trees for their suitability in reforestation

"The strong wind blows away all the minerals that the trees desperately need to survive," Edmund says. Also accounting for the island's sparse vegetation is that the sun beats down for about 12 hours every day. Then there's the spray from the ocean, which douses the seedlings with saltwater, adding its bit to the harsh conditions that makes plants surrender.

Despite the unforgiving environment, 70,000 trees have sunk roots in the island's arid ground. But according to Edmunds, more than 200,000 are needed to stem the tide of progressive erosion. It's painstaking work, he says.

"We now have trees from 2006 that have already grown 5 to 6 meters," Edmunds says. Five meters (16.5 feet) in nearly 10 years - "The soil on Easter Island is very poor, there aren't any minerals. So we need fertilizer for reforestation."

But this Polynesian outpost wasn't always barren and denuded.

Scientists have proven that the island was covered by forests until the 17th century. It's believed the trees were cut down by the ancestors of today's Easter Islanders in order to transport the giant stone statues - the Moai - as well as to build canoes, houses and fires to burn the dead. 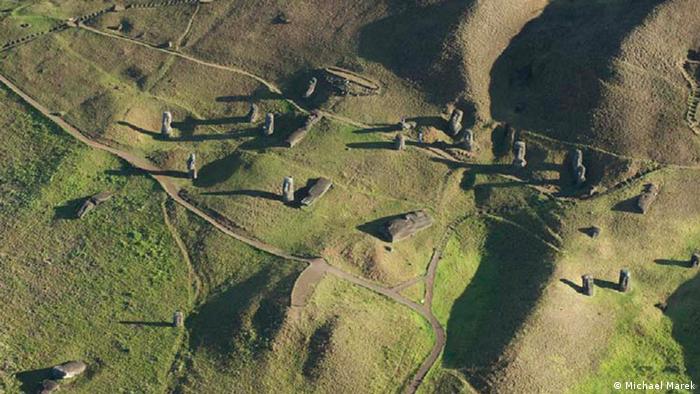 When Europeans "discovered" the island during Easter in 1722, there was not a single tree to be seen.

Islander Uri Avaka Teao says the quest to build statues became an obsession for her ancestors, a message to other tribes about how powerful they were.

In his bestseller, "Collapse: How Societies Choose to Fail or Succeed," US geographer and Pulitzer Prize winner Jared Diamond describes the decline of island life as ecocide. Diamond says the last tree was probably felled in the 1600s - and led to Easter Island's downfall. 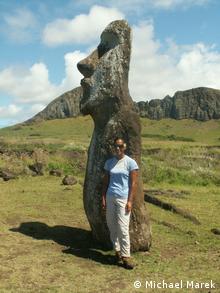 Though she described them as an "obsession," Uri Avaka Teao is proud of the Moai

From then on, islanders lacked the single most important resource to help them roll the stone giants from the quarry. They had no firewood and no materials to make canoes to go fishing in the sea. The areas closest to the coast were quickly overfished, and the island's birds wiped out.

Without trees and forest cover, the surface soil was left exposed to the rain and strong trade winds. The earth continued to erode away, and was hardly suitable for growing food - so Diamond's thesis goes.

"Without trees, the soil was not protected against erosion. They couldn't go out to sea to harpoon tuna, so Easter Island society collapsed," Diamond says.

Competition over the few resources that remained gave rise to wars. In the end, the islanders are said to have resorted to cannibalism to survive. Diamond argues that the fiasco on Easter Island is a metaphor for the global depletion of natural resources - and may indicate a direction for societal collapse in the future.

Today, there is once again some forest on the island - albeit eucalyptus. The first saplings were planted in 1900, and another round of planting followed in the 1970s.

Edmunds says Eucalyptus, a species native to Australia, is not ideal for the island's environment because they grow rapidly and use too much precious groundwater.

Once eucalyptus becomes established, it forms a monoculture. That's another reason why Edmunds has been involved in efforts since 2006 to reforest the southwestern tip of the island with the aito. 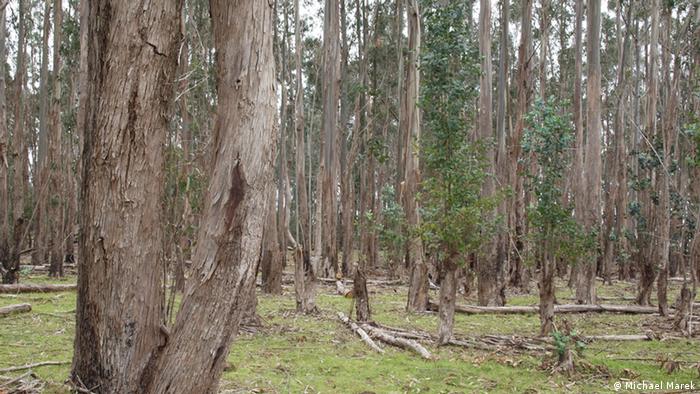 Eucalyptus, though originally from Australia, does well on Easter Island

The project has received support mainly from France, as well as help from the Chilean government - but more funding is needed. Lack of investment means the reforestation program has been put on hold for now.

What has been achieved so far can hardly be described as a success, says Edmunds. Reforestation is extremely important, he adds, because it's the only way to protect the island from further erosion - which he describes as a cancer that is slowly corroding the land.

The island's inhabitants, in the meantime, have grown to love the eucalyptus. Locals even use it to make furniture and other timber products, thus generating income. Edmunds says clearing the eucalyptus now for environmental reasons would be tantamount to a crime.

Environmentalists have urged the Bangladeshi and Indian authorities to work out an urgent action plan to save the Sundarbans forests. Sea levels are rising, and the land is eroding as a result of climate change. (26.03.2015)

Vanuatu is the world's most at-risk country for natural hazards, according to a UN University WorldRiskIndex. And it's not just storms, earthquakes, volcanoes or tsunamis that are the Problem. (17.03.2015)

Chile: The mystique of Easter Island

New Land: The birth of a Pacific island