Brexit will leave UK worse off in every scenario, leaked report predicts

A leaked UK government forecast reportedly predicts that the British economy will suffer no matter what trade deal is struck with the European Union. There are calls for a full disclosure of the report. 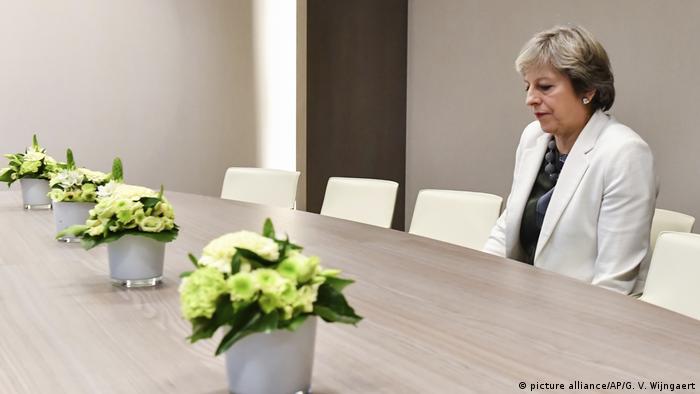 A confidential report prepared for the British government and leaked on Monday suggests that all UK industries will be hurt by leaving the European Union, Buzzfeed News reported.

The findings are the latest embarrassment for British Prime Minister Theresa May's government, which has faced renewed criticism from other EU leaders about the lack of a coherent Brexit strategy.

What the report says

Read more: Donald Trump urges Theresa May to get tough in Brexit talks

How #Brexit talks will impact 2018

Government won't deny report: The Department for Exiting the European Union did not challenge the authenticity of the report, but said it was not prepared to comment on its findings.

Asked by Buzzfeed News why the report was not being made public, the source answered: "Because it's embarrassing."

Asked by DW, a UK government spokesman said: "We have already set out that the government is undertaking a wide range of ongoing analysis in support of our EU exit negotiations and preparations."

"We have been clear that we are not prepared to provide a running commentary on any aspect of this ongoing internal work and that ministers have a duty not to publish anything that could risk exposing our negotiation position," the spokesman wrote to DW.

By Tuesday, several British lawmakers called on the government to release its impact report. Chuka Umunna, Labour MP and chair of the Brexit watchdog group Leave Watch, accused the government of failing to protect the British people's interests by withholding the impact report.

The government, however, rebuffed calls for the report to be released. A spokesman for May said the report only offered a "partial" assessment that hadn't taken into consideration the government's preferred outcome of a bespoke future relationship with the EU.

In Parliament, Brexit Minister Steve Baker described the report as a "selective interpretation of a preliminary analysis" that had been leaked "to undermine our exit from the European Union." Baker also urged lawmakers to be cautious as many previous Brexit analyses had so far been proved wrong.

Brexit trade deal – will they or won't they?

Backed into a corner: The leak was published hours after ministers from the 27 other EU states endorsed the terms for the transition period between Britain's leaving and finalizing its new relationship with the bloc.

EU ministers said the UK could keep its membership benefits for a further 21 months, but said the British government could not block or have input on new EU laws during the transition.

May's future uncertain: Already severely weakened by the lack of a parliamentary majority following a snap election last year, Prime Minister Theresa May is facing a new revolt from MPs within her ruling Conservatives, as bitter divisions over the possible road map to Brexit continue to dog the party.

Why it's concerning: The report heightens the deep uncertainty that followed the June 2016 decision to leave the EU. In the months after, the British pound fell sharply against the dollar and euro, and while the UK economy grew 0.5 percent in the final three months of 2017, annual economic growth was at the weakest rate since 2012 at 1.8 percent.

London's booming property market has dipped over the past 12 months, and last October's collapse of the UK's fifth-biggest airline, Monarch, and the liquidation of the outsourcing services group Carillion earlier this month have both partly been blamed on Brexit.

The report's findings could strengthen the case for the softest possible Brexit or a second referendum on EU membership after negotiations with Brussels have concluded.

India: Thieves arrested for using monkeys in robberies 3h ago

Turkey's Erdogan voices support for Ukraine amid crisis 8h ago