Theresa May has survived a leadership challenge from hard-line members of her Conservative Party. But the battle over her controversial Brexit deal continues. 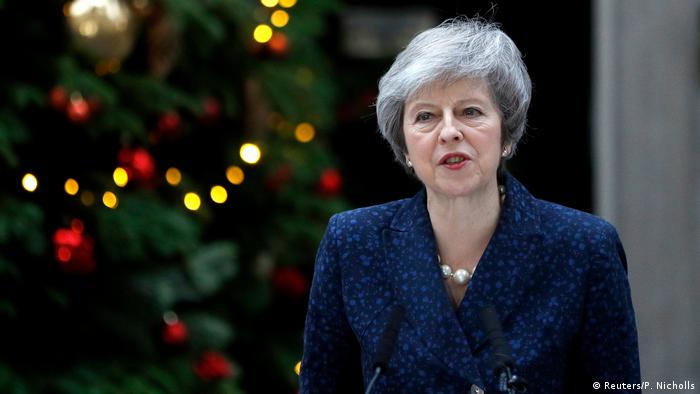 UK Prime Minister Theresa May has won a confidence vote in her leadership of the Conservative Party.

Of the party's 317 lawmakers, 200 voted for her to remain in office and 117 voted against her. The party cannot hold another leadership challenge for another year.

"We now have to get on with the job of delivering Brexit for the British people and building a better future for this country," May said after the result was announced.

She added that she would seek legal and political assurances from EU leaders on a "backstop" arrangement contained in a draft Brexit deal.

Hard-liners in her own party oppose the deal because they fear that the backstop, an insurance policy for maintaining an open border between Northern Ireland, a UK territory, and EU member Ireland, could force the country to accept EU rules indefinitely.

Forty-eight of them triggered the confidence vote on Tuesday after weeks of outrage over May's handling of Brexit talks with EU leaders.

May to step down

Hours before the vote took place, May told lawmakers that she would step down as prime minister before the next general election in 2022.

Despite Wednesday's victory, it remains unclear whether May can secure a parliamentary majority for the draft deal ahead of Brexit, scheduled for March 29, 2019. Many opposition lawmakers oppose it because they say its terms are worse than full EU membership.

On Monday, combined opposition toward the deal convinced May to postpone a parliamentary vote until January 21 at the latest.

The UK risks severe economic disruption if it leaves the EU without a deal. EU leaders including German Chancellor Angela Merkel have repeatedly said they will not renegotiate any aspect of the existing agreement.