The UK government will seek a general election on December 12 — but hurdles remain. The move needs the backing of two-thirds of UK lawmakers, which would require support from a cautious Labour party. 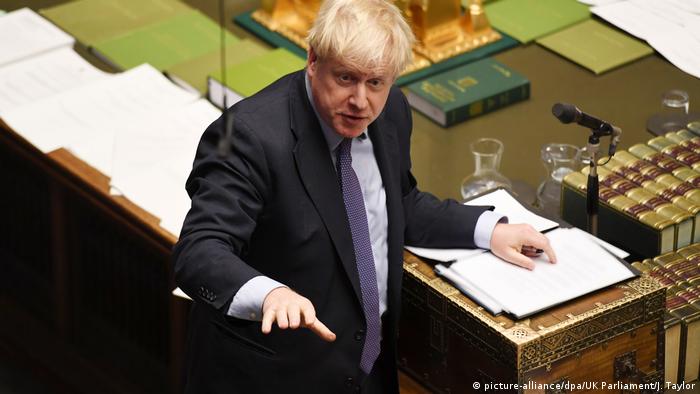 Amid a further Brexit impasse, UK Prime Minister Boris Johnson on Thursday said he would grant more time for Parliament to scrutinize the latest version of the EU withdrawal deal if lawmakers agreed to hold an early election in December.

"The way to get Brexit done is, I think, to be reasonable to parliament," Johnson told BBC in a televised statement. "If they genuinely want more time to study this excellent deal, they can have it, but they have to agree to a general election on December 12. That's the way forward."

The UK is not scheduled to have a general election until 2022. The motion for an early election, which the government is set to table on Monday, would require a two-thirds majority in the House of Commons. On Thursday, Johnson wrote to Labour leader Jeremy Corbyn asking him for help in getting the necessary votes.

"It is time for MPs to finally to take responsibility," Johnson said.

In the letter, Johnson added that "we must give the voters the chance to resolve this situation as soon as reasonably possible" and said the UK could form a new government by Christmas.

Corbyn said he would wait for the EU's decision on delaying Brexit before deciding on an early election. Reinforcing the party's earlier position, he said Labor will "absolutely support a general election" if the government eliminated the option of a no-deal Brexit.

"The principle is: take no-deal off the table, EU answers tomorrow, then we can decide," Corbyn told reporters.

The move comes a week before the latest Brexit deadline, October 31, is set to expire. Johnson had repeatedly pledged to take the UK out of the EU before this date, but UK lawmakers rejected his proposal to fast-track the withdrawal deal through the assembly. By opting for more debate time, they have made it virtually impossible for Johnson to meet the October deadline.

Although the EU has yet to decide on another Brexit deadline extension, Johnson said Brussels will likely agree to London's reluctant request for a three-month delay.

"I'm afraid it looks as though our EU friends are going to respond to Parliament's request by having an extension, which I really don't want at all," Johnson said on Thursday.

In his letter to Corbyn, Johnson also mulled the possibility of the EU offering only a brief extension to November 15 or November 30.

"This would, obviously, be my preference but I was legally prevented by Parliament and the courts from suggesting this," Johnson wrote to the Labour leader.

"If the EU offers the delay that Parliament has requested — that is, we must stay in until 31 January — then it is clear that there must be an election. We cannot risk further paralysis," he added.

Johnson has already tried to force an early election twice since taking power in July, but failed to gain lawmakers' support both times. Labour has previously said they would not support an election unless the possibility of a no-deal Brexit is eliminated.

The opposition party did not immediately respond to Johnson's latest push for an election.

Voters say violence against MPs a 'price worth paying'

The years-long Brexit debate has sparked a polarizing and emotionally charged political crisis. A survey released on Thursday found that a majority of voters on both sides of the Brexit divide believe that violence against UK lawmakers is a "price worth paying" to secure their preferred outcome.

The poll showed that both pro-Leave and pro-Remain voters in England, Wales, and Scotland were willing to accept violence against MPs. However, Leave voters were significantly more ready to find the violence justified.

Researchers at Cardiff University and the University of Edinburgh also asked if the voters if they were willing to accept protests where members of the public are badly injured, which found similar results.

Also on Thursday, France's European Affairs Minister Amelie de Montchalin said Paris would agree on the extension if London can provide reasons for it.

"The French position is to give more time if it's justified, if we understand why we're doing it; some time to ratify (Britain's Brexit accord) obviously, ... If we're told 'We want to have elections,' we'll look at the question of elections," she told France's RTL broadcaster.

"It's not a matter of ultimatums, it's an issue of clarity," the minister said in an interview.