The Brexit saga reaches its peak on Tuesday when the UK parliament votes on Prime Minister Theresa May's deal with the EU. If she loses she could be out of a job. Rob Mudge looks at the vote and what could happen next.

Brexit: Leavers and Remainers face off outside Parliament

What are MPs voting on?

The debate and vote is on whether parliament approves a motion stating that MPs back the Withdrawal Agreement, a legally binding text that sets out the terms for leaving the EU. Separately, MPs will also be asked to vote on a declaration that details the UK's post-Brexit relationship with the EU.

May needs 320 votes to win, but she does not have an outright majority of the 650 MPs (11 do not take part in voting — the Speaker, John Bercow and his three deputies; and the seven Sinn Féin MPs.), and hardline Brexit members of her Conservative Party have said they will vote against her plan. The northern Irish DUP, which props up her government, also opposes the deal in its current form due to the inclusion of the so-called backstop. This provision would maintain an open border between Northern Ireland, a British territory, and EU member Ireland if the UK and the EU fail to agree on a new free trade deal by December 2020. Both DUP and hardline Conservative MPs fear the backstop would tie the UK to the EU indefinitely.

Five days of debate got underway on January 9. On January 15, MPs will wrap up the debate and then embark on a series of votes. Firstly to approve or reject amendments to the government's motion and then to back or reject the motion.

The government has already suffered two setbacks: MPs approved an amendment that will trim the government's tax-raising powers and prohibit spending measures to offset the impact of a no-deal Brexit without parliamentary approval.

John Bercow, the speaker of the House of Commons, will oversee the voting procedure

Voting is due to start at 8 p.m. CET. The speaker of the house, John Bercow, will, as per protocol, ask those in favor to shout "Aye" and those against "No." If the Speaker is unable to judge whether there is a clear result, he calls a "division" by announcing "clear the lobbies."

During a division, MPs divide into either the Aye lobby or the No lobby. As they walk through the lobbies, clerks record their names which are then counted by four appointed tellers. The results are then written down and given to the senior teller. The tellers line up in front of the Table of the House before the Speaker where one of them reads out the result. The written results are then passed to the Speaker who reads the figures again and announces the result. The whole process takes about 15 minutes.

What happens if May loses?

The law states that the government has 21 days to state how it wants to proceed. As outlined above, that period has been limited to three days. May has previously said that if the motion is rejected, the UK will leave the EU on March 29 without a deal. For May personally, it could mean the end of her tenure as prime minister. On the back of 117 of her party's 317 MPs voting against her in December's no confidence vote, a defeat on Tuesday would increase the pressure on her to resign. 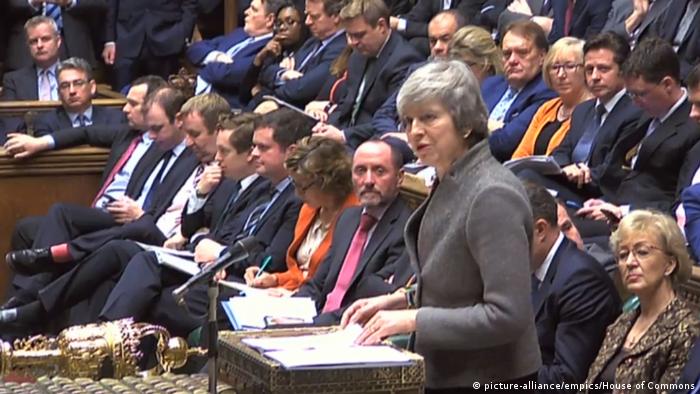 Theresa May could very well be out of a job soon

And what of the opposition?

Jeremy Corbyn, leader of the Labour Party, has said his party will vote against the deal and has called for a general election should the government lose the vote and May is forced to step down. In a first step, Corbyn said he would call a vote of no confidence in the government. If a general election is called and Labour emerges victorious, Corbyn has said he would renegotiate the terms of the Brexit deal with the EU.

He also hasn't ruled out a second referendum, favored by many in the Labour party, but only if an election can't be secured.

Some political observers are describing the endgame over Brexit as not so much a divide between the UK and the EU but a bitter power struggle between the government and Parliament — and a precursor to a constitutional crisis, as no one really knows what would happen next. Currently there is no majority for any of the available options: No deal (which would impose trade barriers, potentially triggering gridlock at ports and a shortage of goods), a soft Brexit that would keep the UK closer to the EU, or a second referendum.

Brexit: Leavers and Remainers face off outside Parliament