Theresa May says she is still trying to build support for her Brexit deal, which has twice failed in Parliament. Britain could leave the EU without a Brexit deal on April 12 if she fails to break the impasse. 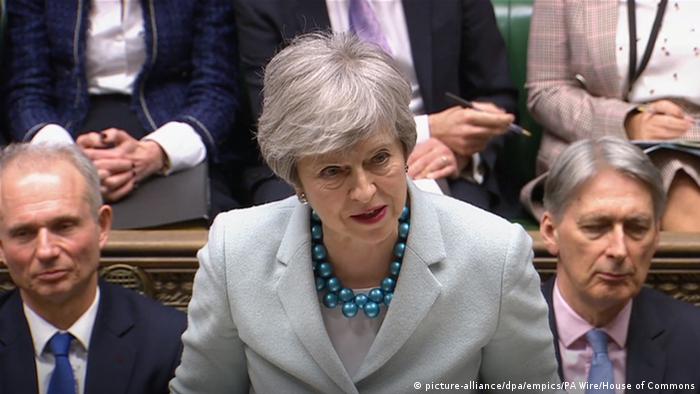 British Prime Minister Theresa May conceded on Monday that she did not have enough support to present her divorce deal from the EU for a new vote in Parliament.

The deal would need to be passed by Parliament this week if Britain is to meet a new May 22 Brexit deadline.

What did May say?

Following May's statement, lawmakers were set to vote on whether to hold nonbinding "indicative votes" on possible alternatives to her Brexit deal. Media reports say the alternatives to be put to the vote on Wednesday could include:

What happens next? If May's deal is not accepted by Parliament in a "meaningful" vote this week, lawmakers will have to vote on whether to accept the extension to April 12.

If they do, options include:

The last option would entail the UK voting in EU elections in May, something Brexiteers are anxious to avoid. If they do not, the legal ramifications are unclear.

Why is May's deal unpopular? Many lawmakers want to see the UK stay in a customs union with the EU or remain in the EU Single Market, both of which go against May's position. A customs union would preclude the UK from making independent free trade deals. Single Market membership would stop the UK from controlling migration from other EU countries.

Where are we with Brexit? May's deal for leaving the bloc has twice failed to win parliamentary support. The EU agreed last week to extend a March 29 deadline, giving Britain until April 12 to decide on what kind of a Brexit it wants if the deal does not pass Parliament and until May 22 if it does.