Brazil's Senate has passed an overhaul of Brazil's labor laws, aimed to kickstart an ailing economy. But political pressure on President Michel Temer may prevent him from staying in office to see the reforms executed. 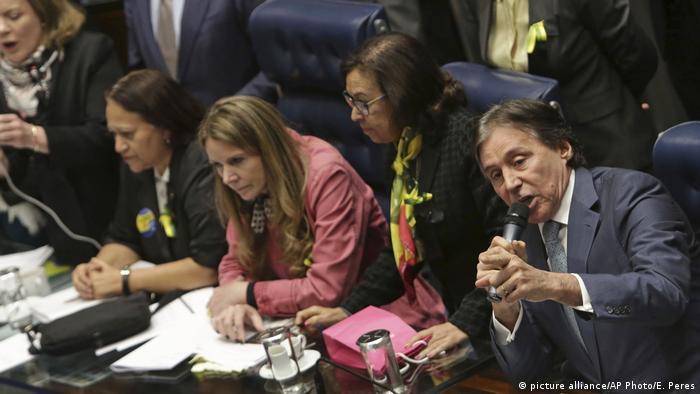 The bill - which includes a cap on government spending, an overhaul of the pension system and an easing of worker protections - is part of an economic reform program that President Temer has said is needed to reinvigorate the economy.

The reforms also include extending the minimum retirement age for men to 65 and for women to 62 from the low 50s at present.

Opposition senators attempted to block the vote (pictured above), but the vote on the measure's first reading saw it passed 50-26 late on Tuesday.

As the Brazilian economy remains in recession, supply side economic reforms - focused mainly on freeing up the labor market - have acquired increased traction among a domestic business elite tired of political inertia and corruption as well as among international investors, who want a return to an era of prospeprity in South America's most populous country.

The bill's reforms have also alienated the left and trade unions.

With a budget deficit of 9.2 percent of GDP and a creaking pension system, Brazil is suffering its worst recession in history, with unemployment persistently high.

Brazil: Recovery on the horizon?

The labor overhaul could give President Temer a boost before the Chamber of Deputies votes on whether to suspend him from office and put him on trial for corruption. That vote has yet to be scheduled.

Temer - who took power in 2016 after Dilma Rousseff was impeached and removed as president - was charged in June in connection with a graft scheme involving JBS SA, the world's biggest meatpacker.

Prosecutor General Rodrigo Janot alleged that Temer made deals in which JBS would have paid him 38 million reals ($11.5 million, 10.5 million euros).

Janot has said he will likely charge Temer in the coming weeks with racketeering and obstruction of justice.

Temer has denied any wrongdoing in the matter.

Brazilian President Michel Temer's days appear to be numbered. Charges of corruption are undermining his administration's credibility. And now a decision by the country's Superior Electoral Court could speed his exit. (06.06.2017)

Corruption, economy of scarcity, mass demonstrations. A new study shows that democracy is losing popularity in Latin America. Disillusion is at its worst in Brazil and Guatemala. (05.09.2016)