Brazilians protest ahead of ruling in Lula corruption trial

Brazil's Supreme Court is set to decide whether former President Luiz Inacio Lula da Silva will start serving out a 12-year jail term. Thousands want to see him behind bars, and even the military has weighed in. 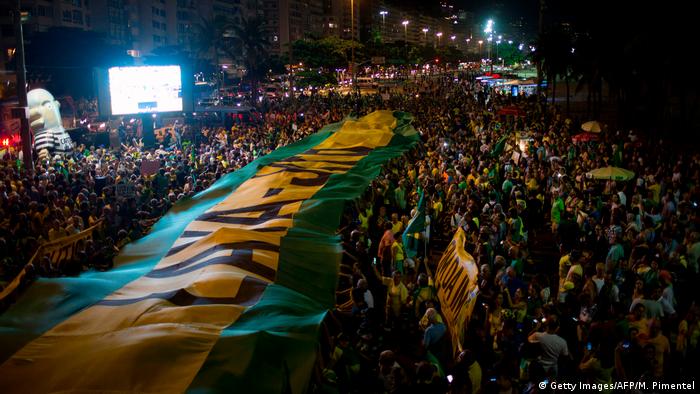 Many Brazilians hit the streets after work on Tuesday evening to protest both for and against the possible imprisonment of Luiz Inacio Lula da Silva, a former president and election frontrunner who has been convicted on corruption charges in a widespread anti-graft probe known as "Operation Car Wash."

The country's Supreme Court is expected to decide on Wednesday whether Lula should begin serving a 12-year jail sentence. The politician had asked the court to allow him to remain free while appealing his conviction.

Up to 20,000 people in Sao Paolo, Brazil's most populous city, protested in favor of immediate imprisonment for Lula. Chants of "No more Lula!" rang through the air as people waved Brazilian flags and signs reading "Lula in jail."

Thousands also turned out in Rio de Janeiro, with smaller numbers demonstrating in other cities.

The protesters also called for Lula to be banned from standing in the October 7 presidential election. The 72-year-old political veteran and founder of the leftist Workers' Party currently leads the field of candidates. 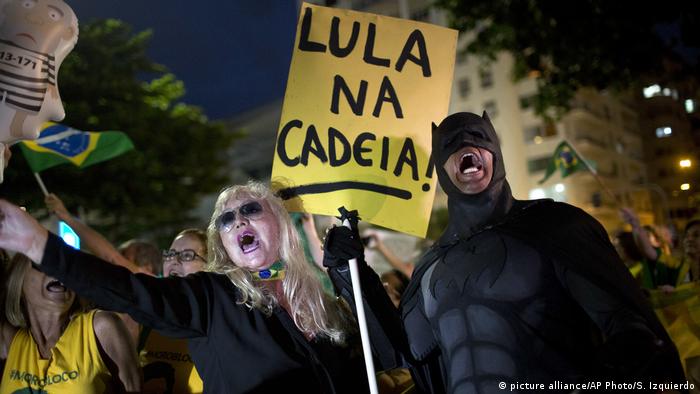 Brazilians waved signs saying 'Lula in jail' and some dressed up

Despite his legal woes, Lula remains a popular politician, known for his rise from humble origins and a political career that helped lift tens of millions of Brazilians out of poverty in his two presidential terms from 2003-2010.

Lula's supporters consider his possible detention to be an attack on democracy. They also took to the streets on Tuesday night in cities across Brazil, though their turnout was reportedly smaller than that of the pro-prison protesters.

In an unusual move, the head of Brazil's army, General Eduardo Villas Boas, added his voice to the chorus calling for Lula to be placed behind bars.

The military head asked on Twitter: "Who is really thinking about the good of the country and future generations and who is only worried about personal interests?"

He then added that the Brazilian army shared the desire of "all Brazilian citizens for the repudiation of impunity and respect for the Constitution."

Despite being somewhat cryptic, the message was seen as backing Lula's imprisonment and stood out as a rare instance of political commentary by a general in Brazil, which was under a military dictatorship for two decades until 1985.

On Monday, Lula had told a large crowd in Rio de Janeiro that he viewed his struggle as an ongoing part of the fight against the former dictatorship.

Lula was sentenced to 12 years in prison for accepting a seaside apartment from construction company OAS in exchange for lucrative government contracts from the state-controlled oil company Petrobas. An earlier appeal lodged by the former president was turned down unanimously by appeals court judges.