The most venomous spider in the world often catches a ride on shipments of bananas, causing panic when it is found. A German tabloid was once offering a cash reward for anyone who could spot one. 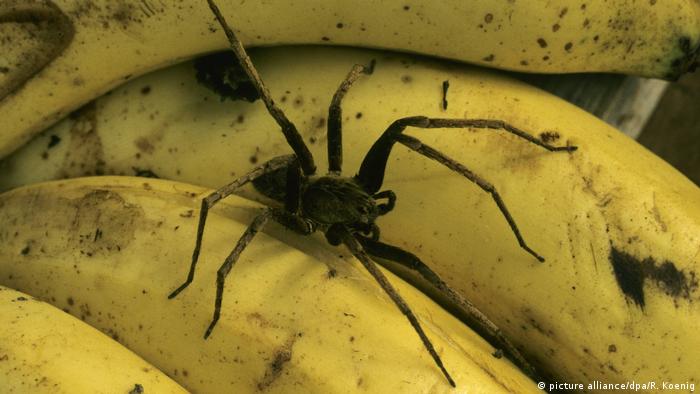 Spiders eat twice as much meat as humans

Ever been told by your doctor it's time to eat less meat? Perhaps it's time spiders cut back too.

Sex is a serious business for arachnids, and male spiders are often eaten by the female after mating. So spiders have had to develop strategies to help pass on their genes. The males have found a work-around. (21.09.2016)

Monday is World Rat Day. DW takes a look at why the rodents are so unpopular, where the widespread disgust for them originated and the moments when rats have done some good. (03.04.2016)

Spider expected to fetch over $25 million at auction

Christie's is dressing up for Halloween: A huge bronze spider will be watching over the US auction house as of October 31. The upcoming sale of the artwork could set a world record for a sculpture by a female artist. (28.10.2015)

A spider alert shut down a German supermarket on Wednesday night.

Police and firefighters sealed off the building after a customer discovered several spider cocoons on bananas in the fruit department of a Globus supermarket in the town of Simmern.

Authorities were worried the cocoons could be filled with the dangerous Brazilian wandering spider, the police chief of operations said on Thursday.

The aggressive species of spider is widely believed to be the most venomous in the world.

They can grow to 15 centimeters (5.9 inches) and often hide inside banana plants. Their neurotoxic venom can lead to paralysis and asphyxiation.

Their apparent presence in banana shipments, whether actual or suspected, often causes panic in European supermarkets.

In 2014 German tabloid Bild was offering readers a 250-euro (US$270) reward for capturing a photo of the deadly spider.

In September last year the notorious British tabloid "The Sun" reported dozens of the spiders invaded a family home after hitching a lift on a bunch of bananas from their local supermarket. It claimed the spider's bite could cause an erection lasting four hours.

In 2005 a Brazilian wandering spider hiding in a shipment of bananas bit a man in England, who was treated and survived.

In this case, an expert from the local zoo looked at the specimen and decided it wasn't a Brazilian wandering spider, just a local variety, and the supermarket was reopened.

Local police thanked the institutions which quickly helped in its identification.