Rallies have taken place across Brazil, with labor unions and activists marching in support of state oil giant Petrobras and President Dilma Rousseff. It comes ahead of a weekend protest against the leader. 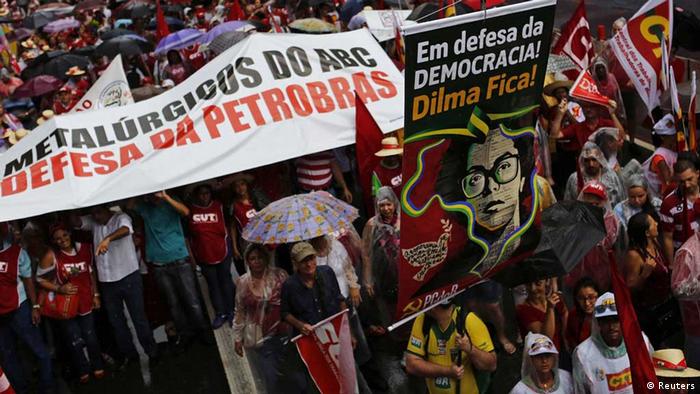 There were marches in up to 24 cities across Brazil, with police estimating a turnout of 12,000 in Sao Paulo, Brazil's largest city. The demonstrations were staged to show support for scandal-engulfed Petrobras, as well as President Dilma Rousseff, two days before planned mass protests against her administration.

Rousseff is just a few months into her new term, but has been hit badly by the corruption scandal over kickbacks that has plagued Petrobras, Brazil's biggest company. The scandal has implicated dozens of politicians from Rousseff's ruling coalition.

Investigators say Brazil's biggest construction and engineering companies paid at least $800 million (762 million euros) in bribes to Petrobras executives and politicians, in exchange for inflated contracts. Nobody has yet been convicted, but some of the alleged wrongdoing happened when Rousseff, who is not being investigated, was chairwoman of the Petrobras board.

Many of the protesters who turned out on Friday wore the red of Rousseff's ruling Workers' Party.

"I defend Petrobras because it's our heritage. But I also want politicians to be able to manage without corruption because it affects the image of our country," said oil-sector worker Rubens Pessanha, 50.

The investigation has led to 40 indictments on racketeering, bribery and money-laundering charges, including from Petrobras and some of Brazil's leading construction and engineering firms.