Brazil remembers its struggle for democracy | World | Breaking news and perspectives from around the globe | DW | 10.04.2014

Brazil remembers its struggle for democracy

Millions of Brazilians took to the streets some 30 years ago to push for free elections. These mass protests eventually led to an end of the country's military dictatorship. 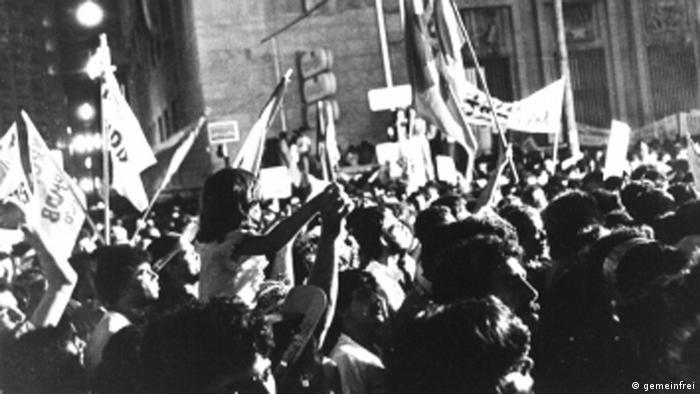 Popular Brazilian song lyrics "My soul sings when I see Rio de Janeiro" left Brazil's President Dilma Rousseff teary-eyed as she remembered the country's struggle for democracy 30 years ago. In 1984, millions of Brazilians took to the streets to push for free elections. One of the country's biggest demonstrations was held on April 10 where more than a million citizens gathered in front of the Candelaria Church in Rio de Janeiro's city center to help support the national civil rights movement known as "Diretas Ja" - Direct Elections Now.

The bossa nova classic by composer Antonio Carlos Jobim has been regarded as the resistance's anthem, remembering all the exiled Brazilians who returned after a 1979 amnesty. Musicians Gilberto Gil and Caetano Veloso who helped support the democratic movement with their songs were among the returnees as well.

"I am sure that their souls sang when they landed in Rio," Rousseff said in reference to the anthem during an official ceremony at Rio de Janeiro's airport. Rousseff, who was also part of the resistance movement, said Brazilians returning from exile gave momentum to the push for democracy. 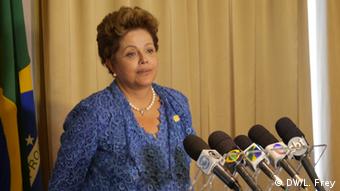 In 1983, still under a military dictatorship, the desire for free elections drove many Brazilians to the streets. But it wasn't until 1984 that Diretas Ja garnered more support. In January, more than a million protesters took to the streets in Sao Paulo's city center; in April, demonstrators returned to voice their anger.

"The dimensions of the protests even surprised the movement's leaders back then," the now 82-year-old Cardoso told Brazilian daily "Estadao" in Sao Paulo. "The end of authoritarianism was only a matter of time."

But it certainly didn't look like that at first - initially, it seemed like Brazil's authoritarian system was there to stay. Despite mass demonstrations, Congress rejected the call to hold direct elections in April 1984. Instead, the regime nominated moderate politician Tancredo Neves of the Brazilian Democratic Movement Party (PMDB) as president - he was state premier in Minas Gerais at the time.

But shortly before Neves was due to be sworn in, he died a sudden death as a result of gastric ulcer on April 21, 1985. Amidst the political confusion and social shock, his deputy Jose Sarney was appointed president. Sarney, a member of the Senate on the governing military party ARENA's ticket, later decided to turn his back on the military and joined opposition party PMBD in 1984. 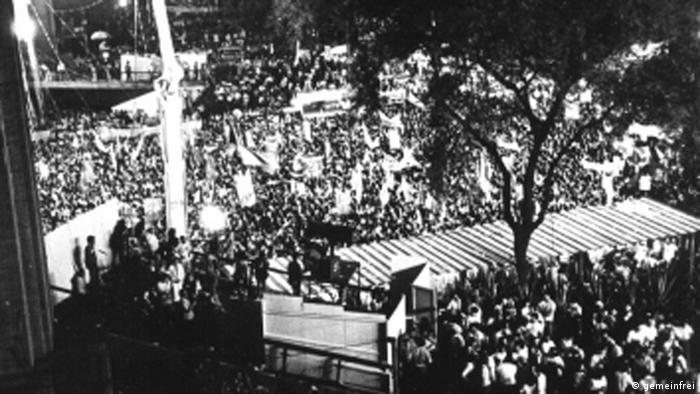 Pressure on the streets paved the way for democracy

Opposition politician and former head of Brazilian workers' party PT, Gilney Viana, recalled the situation, "We lost the vote in Congress, but we won the hearts of the masses." Due to pressure on the streets, officials had to call in a constitutional assembly that then moved to abolish dictatorship.

After that, things turned around quickly: By 1988, three years after the constitutional assembly, the new Brazilian basic law and one of the most progressive constitutions in Latin America had been passed. On November 15, 1989, Brazilians were able to cast a free vote 25 years after the military coup.

According to Brazilian author Zuenir Ventura, the country's return to democracy 30 years ago is one of the best chapters of Brazil's history. "The Diretas Ja movement brought back hope," he wrote in a column for daily "O Globo." "The people protested in a peaceful and disciplined manner for democracy. This dignity can't be compared to protests these days."

Rousseff vows to 'listen' to protesters in Brazil

Brazilian President Dilma Rousseff has promised to listen to protesters who have staged nationwide demonstrations against the soaring costs of World Cup preparations. The protests are the largest in more than 20 years. (19.06.2013)

Can Germany show Brazil how to cope with past?