Nazi memorabilia and weapons valued at around €3 million have been found by police in Rio de Janeiro. The hoard was found during an investigation into a suspected raping of a minor. 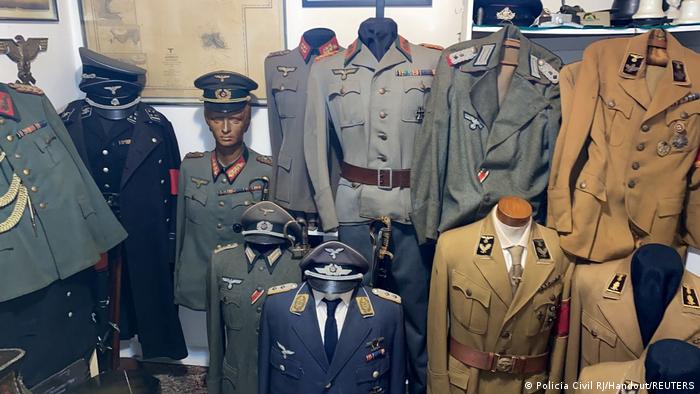 Nazi uniforms pictured at the home of an alleged pedophile in Rio de Janeiro, Brazil

Police in Rio de Janeiro said on Wednesday that they had uncovered a trove of Nazi uniforms and memorabilia, along with weapons, thought to be worth around €3 million ($3.4 million).

More than a thousand items were found in total, according to media reports, including Nazi police uniforms, newspapers, paintings, insignia, flags, medals relating to the Third Reich and images of Adolf Hitler.

Officers had been investigating a case of child rape and found the items at the 58-year-old suspect's home.

Arrest on suspicion of pedophilia leads to Nazi haul

Rio's civil police had initially gone to the suspect's residence to serve an arrest warrant over allegations he had raped a minor and had been abusing children who lived in his apartment complex.

It was then that police said they discovered the hoarded items.

Luis Armond, who is the lead detective, told the news agency Reuters: "He is a smart guy and articulate, but he's a Holocaust denier, he's homophobic, he's a pedophile and he says he hunts homosexuals."

"I'm no doctor," Armond continued. "But he seems to me an insane psychopath."

Its understood that investigations will now be expanded, with a focus on possible links to far-right groups.

Germany's head of state has called for more efforts to remember Nazi atrocities carried out in the former Soviet Union. Hundreds of thousands of people were killed during the occupation.