An estimated 270 people were killed when Brazil's Brumadinho dam burst in January 2019. The court's decision means the ex-CEO of mining giant Vale and employees of a German auditor will have to stand trial for homicide. 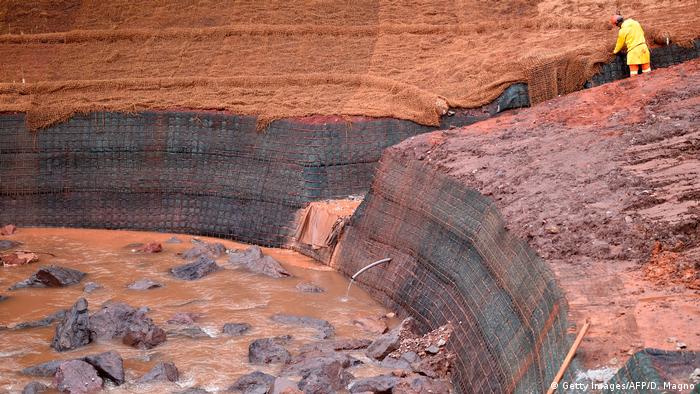 A Brazilian state judge has accepted charges and allowed a case to move forward against employees from mining company Vale and German auditor TÜV SÜD for their role in a deadly dam collapse last year.

Some 270 people lost their lives when the Brumadinho tailings dam burst on January 25, 2019, releasing tons of toxic sludge that swallowed homes and roads downstream.

The decision by the court in Brazil's eastern Minas Gerais state came after prosecutors filed charges last month accusing 16 people who had worked for the two companies — including Vale's former CEO Fabio Schvartsman — of willful homicide.

The prosecutors have alleged that Vale and TÜV SÜD intentionally covered up problems with the dam's structural integrity over a number of years. Shortly before the disaster, the Brazilian subsidiary of TÜV SÜD had inspected the dam's retention basins and concluded that they were safe.

If found guilty, the accused could face prison sentences of between 12 years and 30 years.

Lawyers representing Schvartsman said in a statement they expected to prove his innocence in court.

TÜV SÜD said Saturday that it did not consider itself to be "legally responsible" and would "vigorously defend itself against claims for damages."

German daily Süddeutsche Zeitung reported that Munich's public prosecutor was also investigating TÜV SÜD over its role in the dam collapse. According to the report, a German engineer is under investigation for several offenses, including negligent homicide and bribery.

When a dam containing iron ore tailings burst in the Brazilian city of Brumadinho in January 2019, at least 270 people were killed. Today, the same problems that led to the tragedy persist at hundreds of other sites. (26.01.2020)

TÜV Süd had certified the structure shortly before it collapsed in January, leaving 270 dead. Faced with a number of lawsuits, the company has now put a figure on the extent of its potential liability. (20.08.2019)

German safety inspection firm TÜV Süd had inspected the dam for mining company Vale, shortly before it collapsed in January 2019. Plaintiffs in Munich are seeking hundreds of millions of euros in damages.