Boy or girl? Actually, we DON'T want to know the sex because we don't care

We're expecting our first child. So everyone's asking: Awwww, will it be a boy or a girl? Why is everyone so fixated on gender? Anna Sacco asked the experts what our obsession does to children. 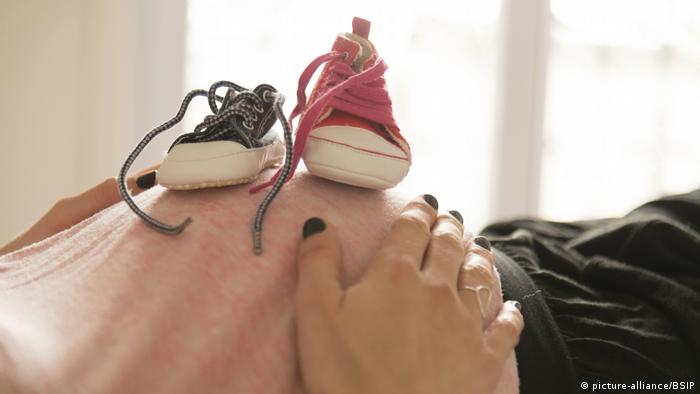 Of course we're curious about our future baby. Will it have blue eyes from its father and my brown curls? Will it inherit dad’s bright character or my brooding nature? But the question of the sex of our future child is — quite deliberately — not one we ask ourselves.

Whether penis or vulva, sex is only one of many characteristics that will make up our child. Genitals can’t tell us whether our child will be wild and adventurous, good and loving, and certainly not whether it prefers pink or blue. So why should we focus on it?

Read more:Who's the daddy: Does it really matter where your DNA comes from?

Among our friends, however, this perspective is hard to understand. How will we know, they ask, what to buy for the child?

The below tweet was posted by a German midwife in training. She says: "I asked, but they are serious… #pinklightbluetrap #deliveryroom #midwifetraining." One commenter jokes: "Sorry Mrs Miller: your son has accidentally become a daughter — we confused the scissors when cutting the umbilical cord."

Categorization from day one

Height, shoe size or hip size: until puberty, most children develop in the same way. Nevertheless, to many people the distinction between "boys and girls" is so important that they feel compelled to showcase it from the very beginning with gendered colors, clothes and accessories. Why?

I asked psychologist Stefanie Peykarjou. She researches developmental psychology and knows a lot about categorization.

"Classifying things into categories, for example 'animate/inanimate', 'animal/human being', 'boy/girl', develops very early on in infancy," she explains. This helps us understand our environment and make predictions.

In many ways, it makes sense to divide the world into categories. "But what is important," says the expert, "is that we don't stop at this first, automatic classification, but rather follow an open thinking process."

In other words, even if the child's name is Lisa and she likes clothes and pretty hairstyles, she can still have other preferences and characteristics that aren't considered typically "girly.". Maybe she prefers to play with cars rather than dolls. Or both at the same time. "But if children are constantly classified as boys or girls and their environment sets out clear expectations of the child, this can impair individual development," says the developmental psychologist. 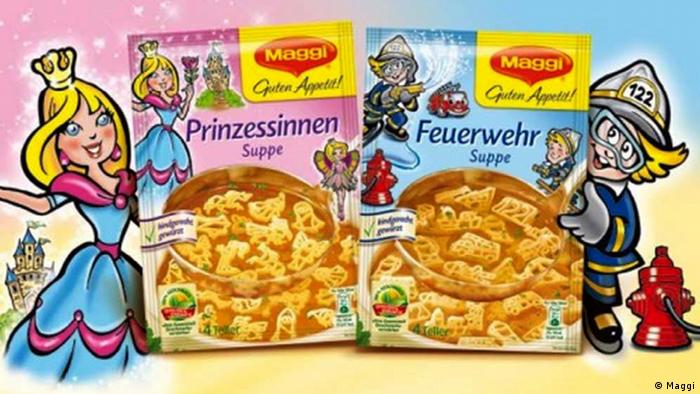 The food giant Maggi is not the only one marketing food like soup according to gender.

Puting children into a box and closing it

The influence of gendered marketing is so strong that it is becoming increasingly difficult for children to discover their own inclinations and interests. Whether clothing, toys or products — the two-part narrative of the pink glittering princess versus the adventurous hero is omnipresent in the advertising world.

Gender expert Aline Oloff even sees a connection between these stereotypical attributions in early childhood with later career choices: "If you look at children's toys alone, they’re offered different concepts for their future development depending on whether they are girls or boys."

Gender bias — the unconscious attribution of preferences, qualities and abilities based on gender — begins in the nursery. This is not new: the so-called Baby-X experiments from psychologist Phyllis A. Katz in the 1970s showed how differently children were treated by adults, depending on whether they assumed that the child was male or female. Baby Mary was more frequently offered the doll to play with, while Baby Johnny was offered the ball. Both times it was actually the same baby, both times wearing a yellow onesie.

The BBC reenacted the experiment in a video and came to the same conclusion: the child thought to be a girl received dolls and cuddly toys. The alleged boy, on the other hand, was offered toys that trained spatial thinking and motor skills.

"Our child can play with anything," we often hear when asking other parents about gendered toys. And yet the question of whether the boy may also wish to have a doll instead of a Lego airplane or truck for his birthday often triggers funny looks. Boys prefer to build and girls like to care. That's how they are by nature, we are told.

But this becomes a self-fulfilling prophecy, because even small children want to live up to the expectations placed on them.

The fact that the expectations between parents and children are quite different was proven in a study about the perceived motor skills of children, where it was found that — while objectively there was no difference — parents tended to overestimate their sons' abilities, while daughters were underrated.

There is no question children are conditioned to be and act a certain way.

"It takes above-average self-confidence as a girl not to lose interest in the technical things when everyone around you is convinced that boys are supposedly better at it," says Sascha Verlan, co-author of the book The Pink-Blue-Trap (called Die Rosa-Hellblau-Falle in German), about prescriptive gender roles in everyday family life.

Breaking out of the pink-versus-blue trap

As soon as the sex of a child is known, people will automatically assign it certain roles, often even before birth. When they learn that it will be a boy, mothers suddenly describe the child's movements in their stomach as strong and lively. Girls, on the other hand, allegedly behave much better in their belly.

Another predictable gendered tale we often hear from our circle of friends is that the expectant daddy surely wants a boy with whom he can play sports with. And mum would certainly be happier with a girl — she'll be able to dress her up so nicely.

"It's not as bad to realize you have prejudices than to think you don't. Because then you unconsciously pass them on," says Verlan. So if we don't want to know whether our unborn child is male or female, in a way it's to protect us from ourselves and our own stereotyping.

After all, we grew up in a society that created the distinction between boys and girls and continues to validate and reproduce it.

How can we escape it? "Let the children have their preferences and above all don't sanction little boys when they reach for a doll, like to paint or decide on the golden ballet slippers in a shoe shop," advises gender researcher Oloff.

That's exactly what we want to do — regardless of its sex.