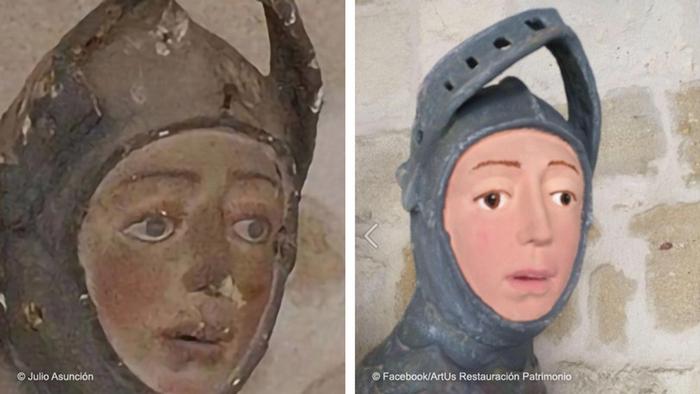 Spain is already home to the world's most notorious restoration disaster, caused by an amateur painter well into her 80's who attempted to touch up a priceless ancient fresco of Christ, the Ecce Homo, in the town of Borja in 2012.

Now another botched restoration attempt is causing outrage in the country.

In the church of San Miguel, in the northern town of Estella, a weathered 16th-century sculpture of St. George was painted over in bright colors, with the already simple visage also becoming yet more so in the process.

The job was apparently done by a local handicrafts teacher at the request of the parish priest.

According to Spanish press agency EFE, the plan was only to have the sculpture cleaned and not restored.

The mayor of the city, Koldo Leoz, expressed his outrage on Twitter: "How is it possible that the parish priest of a church could determine the fate of a 16th-century statue without communicating his intentions to the city council or to regional government?"

"We cannot tolerate more attacks on our cultural heritage," Spain's art conservation association (ACRE) said in a statement. "It shows a frightening lack of training of the kind required for this sort of job."

Authorities are investigating the circumstances which led to the unapproved restoration of the work listed in the Cultural and Heritage Register of Navarra, said the director of the regional heritage service, Carlos Martínez Álava. 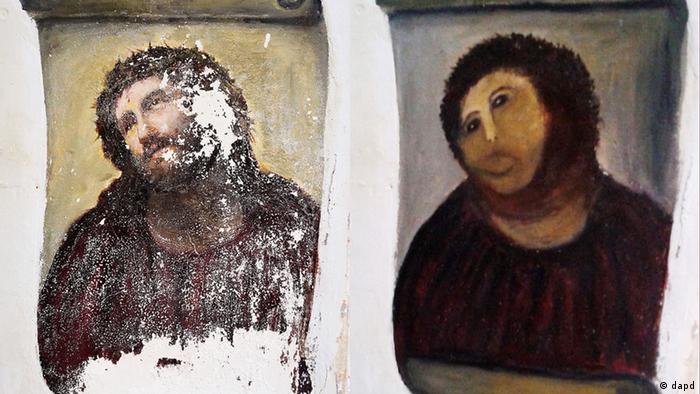 The Ecce Homo fresco, before and after amateur artist Cecilia Gimenez ruined it

While the infamous Ecce Homo restoration in Borja from 2012 led to much ridicule, it has also had some positive effects, drawing thousands of tourists to the town, which opened an interpretation center immortalizing the history of the artwork turned meme.

Cecilia Gimenez, the elderly parishioner who inadvertently created the work known as the "Monkey Christ" or the "Beast Jesus," has turned into a pop icon herself. Along with her numerous appearances on TV, an opera, a music video and a documentary emerged from her story.

What is believed to be the tomb of Jesus, at Jerusalem's Holy Sepulchre Church, has been unveiled again after nearly 10 months of restoration work. Last spring, it was on the verge of collapse. (22.03.2017)

The centuries-old marketplace has already undergone a security upgrade after a spate of terror attacks in Istanbul. For the bazaar's traders, the primary concern now is not the restoration but lack of tourists. (15.03.2017)

A large blaze has ripped through an iconic building at the Glasgow School of Art for the second time in four years. The premises were due to reopen next year following a major restoration project. (16.06.2018)

For the first time since the destruction of Palmyra by the IS, two artworks from the city have been restored. Italian archaeologist Maria Laurenti spoke with DW about the political hurdles and challenges of restoration. (21.06.2017)

Matthias Grünewald's paintings are masterpieces of the late Gothic era. After four years of work, experts have restored the painter's famous Isenheim Altarpiece to its former glory.

As persistent attacks from Russia continue to destroy Ukrainian cities and age-old cultural sites, German experts are getting together to save the country's valuable heritage.