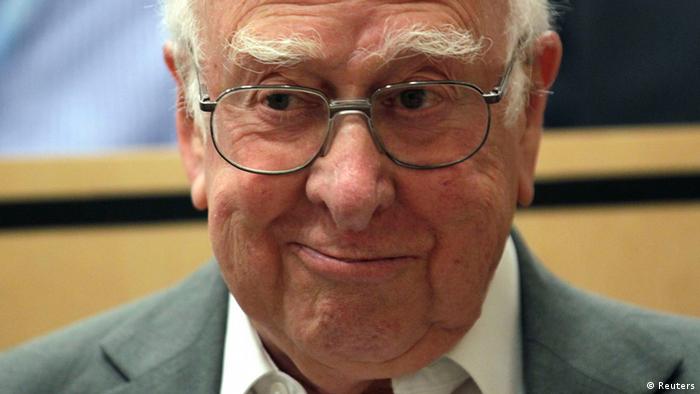 Theoretical physics must be a lonely calling.

There you are, driven to discover and explain the universe. You've got people around you, a team of disciples, all following a similar ideology.

An assumption. Hypothesis. Or prediction.

But there's no way of knowing whether what you see, or this thing you think could there if only the technology would let you see it, is... indeed there. Until you prove it.

And even your own science community needs convincing.

You would have to be a visionary. Or a true believer. Which is ironic. In physics. Where everything began with a bang, rather than the words "In the beginning..."

Someone like Peter Higgs. The British theoretical physicist and Nobel Laureate is known for predicting the existence of a very special, fundamental element of the known universe.

The God Particle. Or "Higgs boson."

"After graduating from King's College London in 1950, Peter was interested in doing a PhD in elementary particle physics," recalls Sir David Wallace, who did his own PhD under Higgs in Edinburgh in the 1960s. "But Peter was advised against it by the theoretical chemist Charles Coulson. Coulson told him it was very difficult to make any impact in that area."

Higgs started his PhD under Coulson and was later supervised by Christopher Longuet-Higgins. And, luckily, this route led him to eventually make an incredible impact.

Somehow, he's managed to remain modest about it all.

What is a hadron collider?

What is a hadron collider?

"He didn't self-promote," Wallace wrote in an email to DW. "He was probably one of the last people in the physics community to refer to his predicted particle as 'the Higgs boson.'"

You get the sense Higgs knows he's been lucky, too.

Other theoretical physicists, such as German-born Nobel Laureate, Albert Einstein, are not so lucky.

Einstein's theories of relativity gave us ideas about the warping of spacetime, black holes and gravitational waves. But he died long before those fundamental propositions about the universe could be proved or disproved. 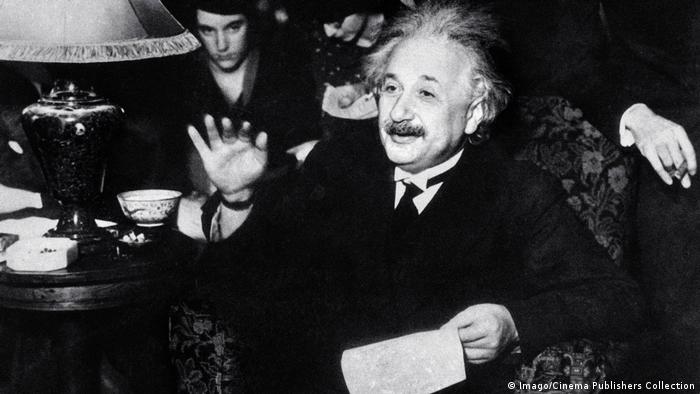 But Higgs has lived to see his theory proved.

The Higgs boson — or God Particle — is described as an elementary particle in the Standard Model of particle physics.

"Its discovery was the 'capstone' for the standard model of particle physics," wrote Sir Martin Rees, UK astrophysicist and Astronomer Royal, to DW.

The Standard Model describes some of the basic forces that hold the universe together. In that sense, it is anything but basic. It is quite fundamental. 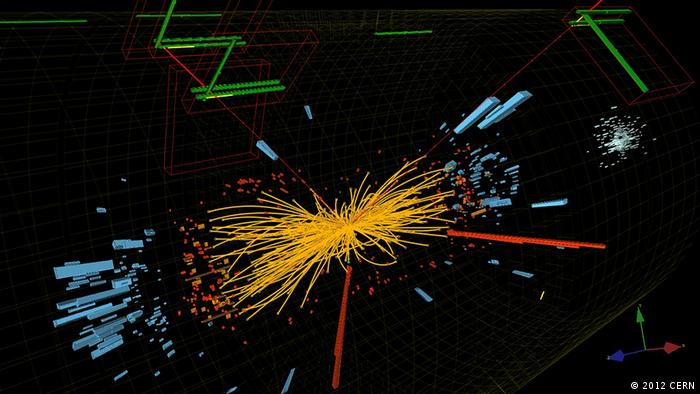 And, alas, a little too complicated to explain here.

It was in the 1960s that Higgs, and his colleagues Robert Brout and François Englert first started work on a theory known as the Brout-Englert-Higgs mechanism, and later the "Higgs field." Out of that came the Higgs boson.

They wanted to explain why some particles have mass and why others do not — and for those that do, how they get their mass.

Physics can be a real rabbit warren of ideas when you get started. 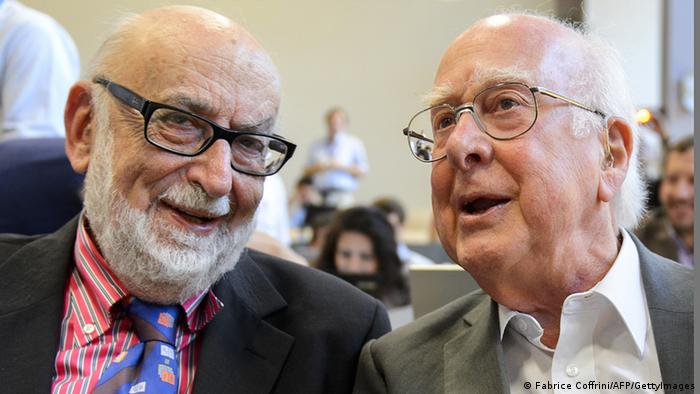 Peter Higgs was just one of many scientists who tried to explain how particles got mass. Here is Higgs (L) with fellow Nobel Laureate Francois Englert in 2012

So, we'll focus on only one aspect of the problem for the purpose of this piece: It took decades for scientists to observe the Higgs boson in an experiment.

It was dubbed the "elusive" particle.

Until one day when, long after Higgs' retirement from active teaching in 1996, scientists at CERN shouted "Oh, my God, it's the God Particle!"

Or words to that effect.

"The fact it took nearly 50 years has a lesson for the future," says Rees. "Even if current speculative ideas about dark matter, strings, etcetera, are correct, it may be many decades before experiments and instrumentalists have the capability to test those ideas."

There's no doubting that the entire scientific community felt the excitement at CERN when its then-director general, Professor Rolf-Dieter Heuer, revealed that they had detected a new particle "consistent" with a Higgs boson. 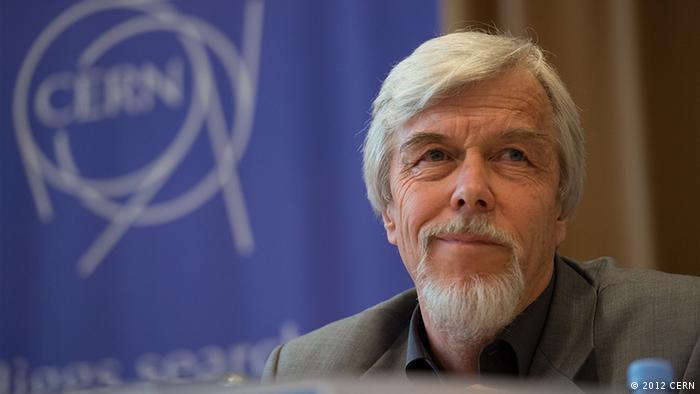 Particle physicist Rolf-Dieter Heuer was CERN director general from 2009 to 2015. They day they detected the Higgs boson was a "career highlight"

It was a bit like a pathologist describing a murder scene on CSI Geneva ("Bruising consistent with... two particles colliding").

But having waited so many years, it's understandable that they should want to be cautious. Until they had confirmed its existence, which they did in 2013.

"It was undoubtedly one of the highlights of my career, and it was fantastic that we had Peter Higgs and François Englert with us that day," Heuer told us in an email.

Carl Hagan and Gerry Guralnik were also there, he recalls. Hagan and Guralnik, along with Tom Kibble, had reached similar conclusions in the 1960s to Brout, Englert and Higgs. So that was a coming together of its own kind.

"It was a day full of emotion," says Heuer. "Who can forget the image of Peter wiping a tear from his eye and declaring that he felt privileged to have lived to see the day?" 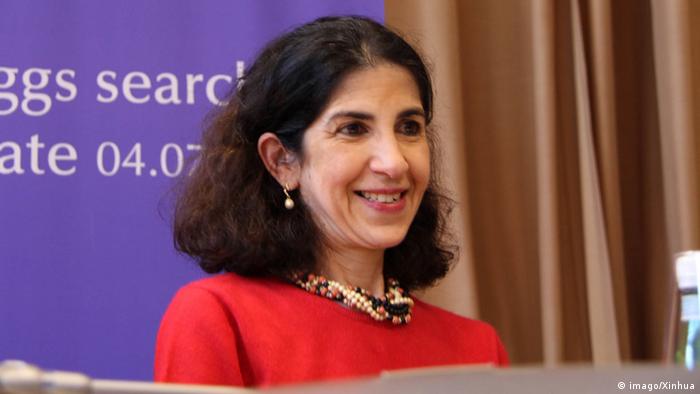 CERN director general Dr. Fabiola Gianotti says the Higgs boson is "unique" and that it remains "quite mysterious"

Sounds like he really knew he was one of the lucky ones.

"It's what he said next, though, that is a true indicator of the kind of person he is," says Heuer. "When pressed by the media, he declined to comment, saying that this was a day to celebrate the experiments rather than the theory. Well, Peter, today is a day to celebrate you: Happy Birthday!"

And we wish him a happy birthday, too. Although he may be too modest to accept our congratulations.

That is the kind of man Higgs seems to be: Science first, scientist second.

Perhaps that's why he turned down a knighthood in 1999, reportedly saying that it would have been "premature" and that he didn't want "any sort of title." 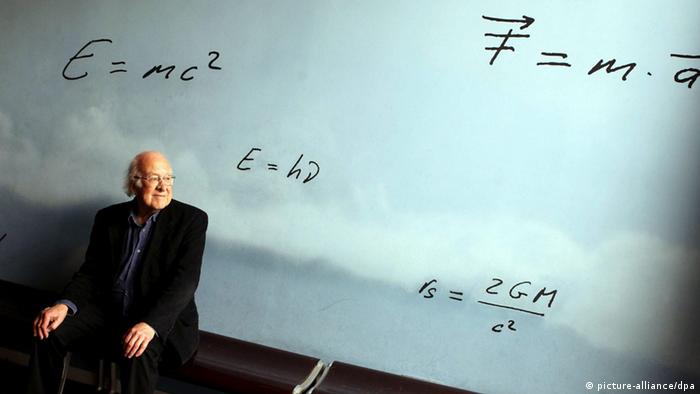 Peter Higgs seems quite modest despite his achievements. He is happy to appear smaller as a scientist than the science itself

But he did accept his Nobel Prize in 2013. Higgs shared the Prize in Physics with François Englert, who had taken a position as a member of the Institute for Quantum Studies at Chapman University. Robert Brout had died a year before the Higgs boson discovery was revealed.

"The mechanism that Brout, Englert and Higgs described in landmark papers in 1964 has been a guiding thread of experimental particle physics for decades," said CERN's serving director general, Professor Fabiola Gianotti, in an email. "It is a triumph of theory and its confirmation by the ATLAS and CMS experiments [at CERN] were a monumental achievement in experimental physics."

And she hints at a certain lasting mystique as well.

"The Higgs particle has been described in many ways. It's unique and is still quite mysterious. It will continue to play a central role in physics exploration in the future. Happy Birthday, Peter, and many happy returns!"

Eyeing a 'third woman' at the 2018 Nobel Prize in Physics

The 2018 Nobel Prize in Physics recognized revolutions in laser physics. And the lack of a revolution in equality and diversity. (02.10.2018)