Eight young people in Bosnia-Herzegovina have died of apparent gas poisoning while celebrating the new year, officials say. The private party took place amid restrictions on public gatherings amid the pandemic. 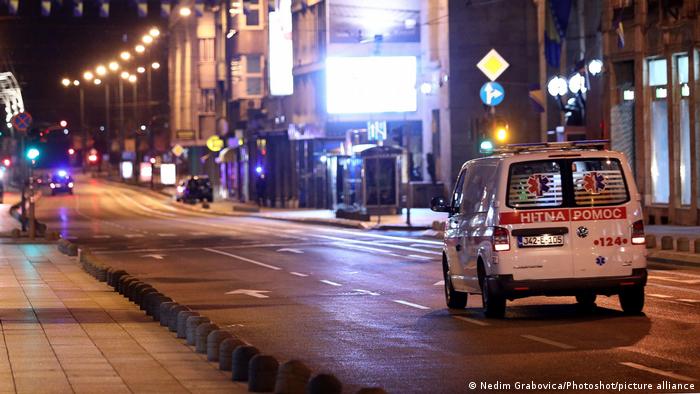 A Bosnian ambulance in Sarajevo

Eight people aged around 20 were found dead after a New Year's party in southern Bosnia-Herzegovina, with local media reporting on Friday that they appeared to have been victims of a gas leak.

The four men and four women had been celebrating the New Year at a weekend house in the village of Tribistovo, according to state-run BHRT television.

The head of the Posusje municipality where the village is situated, Ante Begic, expressed condolences to the victims' families on Facebook "after a tragedy in which eight young lives were lost."

Police are investigating the incident. Carbon monoxide poisonings, which can occur when the toxic but odorless gas escapes from improperly ventilated heaters, appliances or engines in enclosed spaces, are not infrequent in the Balkan region.

Because of current coronavirus restrictions on public gatherings and opening times of restaurants and pubs, many people in Bosnia have been relegating their celebrations to private homes.

Bosnia: Divided city of Mostar holds first local vote in over a decade

Voters in Bosnia's Mostar headed to local polls for the first time since 2008 after Croat and Bosniak politicians finally settled a row over election rules. Smaller parties may act as tiebreakers, early results show.

Researchers along the eastern coast of the Adriatic Sea are diving deep to try and find out what is killing local shark and ray populations.