Venezuela and Colombia have both recalled their ambassadors amid a dispute over the closure of a major border crossing. Hundreds of Colombians have been deported under a Caracas plan to curb crime along the frontier. 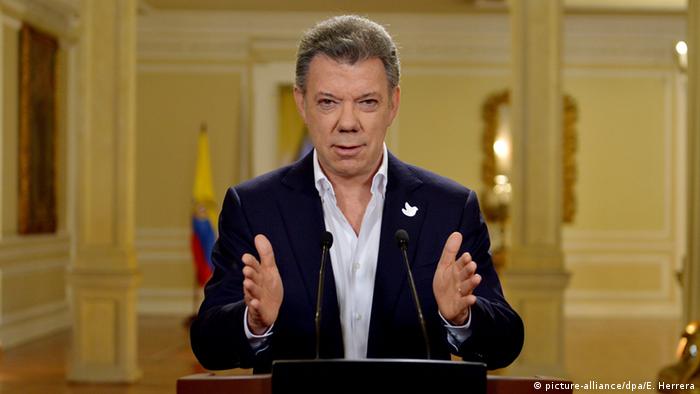 Colombian President Juan Manuel Santos (above) announced his decision to recall the country's ambassador from Caracas in a televised address Thursday, accusing the Venezuelan government of only pursuing "solutions involving force."

"I have favored dialogue and diplomacy and I will keep doing so, but I cannot allow Venezuela to treat Colombia and Colombians this way," Santos said.

He added that he had asked his top diplomat to request an extraordinary meeting of foreign ministers from the Union of South American Nations (UNASUR).

Later on Thursday, Venezuela's Foreign Minister Delcy Rodriguez announced on Twitter that his country would also be recalling its ambassador from Colombia "for consultations." Such a move is considered the diplomatic equivalent of lodging a complaint.

Rodriguez said relations with Colombia were being "fully revised" given the suffering "of our people at the hands of the paramilitaries and economic warfare."

The countries' foreign ministers met for talks in the Colombian resort city of Cartagena on Wednesday, pledging to solve the dispute and improve border security. However, no concrete agreements emerged from the meeting.

The tensions between the neighbors escalated last week after Venezuelan President Nicolas Maduro closed a major border crossing in a bid to crack down on migrants and smuggling gangs. The move came in response to an attack by unknown assailants on an anti-smuggling military patrol.

Maduro initially ordered the border closed for 72 hours. But two days later he declared a state of emergency in five frontier towns, extended the closure indefinitely, and began deporting Colombian migrants. More than 1,000 Colombians have been expelled in recent days, while more than 4,000 others have left of their own accord. Many deportees said their houses had been destroyed.

"These families aren't paramilitaries, they are humble families," President Santos said. "And they were thrown out, as they said to me, like dogs."

For his part, Venezuelan President Nicolas Maduro reiterated that he had no plans to re-open the crossings until the Colombian government "regained its sanity" and took measures to boost security at the border.

According to Brazilian newspaper "O Globo," Brazil and Argentina have offered to work together with Colombia and Venezuela to resolve the spat.