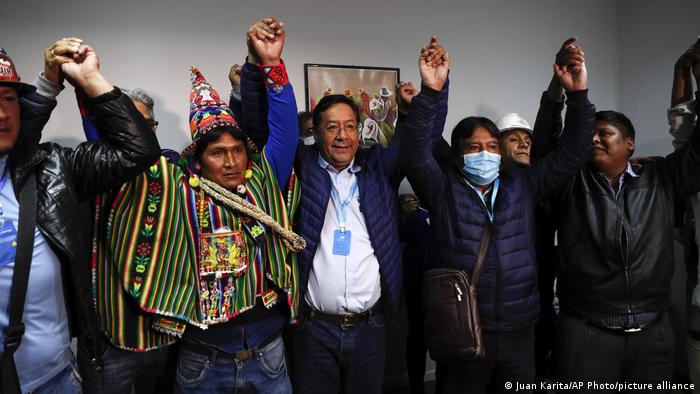 An exit poll in Bolivia's high stakes presidential election has given socialist candidate Luis Arce the lead he needs to avoid a runoff election. The quick-count Ciesmori polls were released late on Sunday by Bolivian media, and showed Arce with 52.4% of the votes and Carlos Mesa in second place with 31.5%.

Arce, a former economy minister, is an ally of former President Evo Morales, while Mesa is a centrist who served as president in the early 2000s. To avoid a runoff, the winning candidate needed to secure more than 50% of the vote, or 40% with a lead of at least 10% over the second-place candidate.

Without claiming victory, Arce thanked supporters and had a confident tone in a press conference shortly after midnight in the Bolivian capital, La Paz.

"We are going to work, and we will resume the process of change without hate," Arce told reporters. "We will learn and we will overcome the mistakes we've made [before] as the Movement Toward Socialism party."

Bolivia erupted in violence in October 2019 as Morales was seeking a fourth term — despite the fact he was not technically eligible to do so.

The country's high court gave Morales the green light to run, even though he lost a referendum asking Bolivians if the constitution could be amended to add a fourth term. Early results announced on election night were reversed two days later, handing a narrow victory to Morales. The delay in results triggered violence nationwide that cost at least 30 lives, caused food shortages and led police and military leaders to force the former president into exile.

Prior to Sunday's vote, Bolivia's Supreme Electoral Court unanimously ruled against reporting preliminary vote totals as ballots are counted, advising that only the final tally should be reported. The counting process could take up to five days.

Conservative Senator Jeanne Anez, the interim president who did not take part in the election, asked voters to stay calm until final results were announced.

"Patience, we must all be patient waiting for the results without generating any type of violence," she said. "I assure you we will have credible results."

Still cautioning that the results weren't yet official, Anez later congratulated Arce on his "apparent win" on Twitter.

If Arce's victory is confirmed, it would be a triumph for the leftist movement Evo Morales built. But as his successor, Arce will likely have to govern under the long shadow of the man who was his former boss and the country's first Indigenous president.

Despite overseeing a long period of stability in one of Latin America's most volatile countries and an export-led economic surge, Morales remains a polarizing figure in Bolivian politics. In particular, his quest for a fourth term upset large chunks of the population.

The staunch support he still holds, however, likely contributed to Arce's success. Arce will face the question of whether Morales can return from exile and how he should face a series of corruption scandals.

All of this is happening as the coronavirus pandemic has struck Bolivia harder than almost any other country on a per capita basis — nearly 8,400 of its 11.6 million people have died of COVID-19.

Landlocked Bolivia remains one of the poorest countries in the region, despite being rich in resources. The election also comes amid severe economic turmoil, with GDP expected to contract by 6.2% in 2020.