The Islamist militant group Boko Haram has claimed responsibility for a twin shooting and suicide bombing of Christian churches in Nigeria. The group vowed to continue attacks until the country adopted Shariah law. 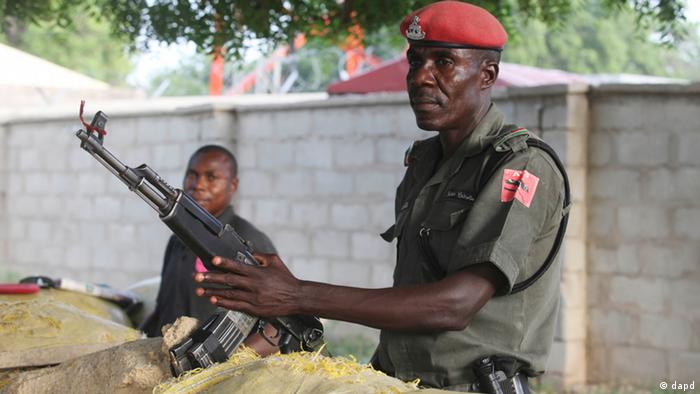 Islamist militants launched twin attacks on evangelical churches in northern Nigeria on Sunday, killing at least four people and wounding more than 40 others.

In northeastern town of Biu in Borno state, five gunmen open fired on a church congregation, killing one woman and wounding three others before fleeing, according police spokesman Samuel Tizhe.

Nigerian President Goodluck Jonathan came to power a year ago in a vote viewed as the fairest in nearly two decades, but the challenges of the last 12 months have been formidable. (29.05.2012)

"Three gunmen came to the premises of the church and started firing at people outside the church before going into the main building to carry on their killings," Hamidu Wakawa, one of the congregants, told the news agency Reuters. "Many people have been killed and wounded."

In the central city of Jos, a man drove a car to the Christ Chosen Church, detonating a suicide bomb that leveled the building, killing at least three people and wounding more than 40 others.

"The suicide bomber did not drive into the church before the explosion; he was in front of it," police spokesman Abuh Emmanuel told the Agence-France Presse (AFP) news agency. "The church building collapsed entirely due to the intensity of the bombing."

"We launched these attacks to prove the Nigerian security wrong and to debunk their claim that we have been weakened by the military crackdown," a Boko Haram spokesman, who called himself Abul Qaqa, told reporters in the northeastern city of Maiduguri via telephone.

Boko Haram has killed more than 1,000 people since mid-2009, with violence focused in Nigeria's largely Muslim north. The group previously claimed responsibility for a January attack in the northern city of Kano that killed 185 people. In August 2011, the militant group targeted the Nigerian UN headquarters in the capital, Abuja, in a suicide bombing that killed 25 people.

Members of Boko Haram have reportedly received training from al Qaeda-linked militants in northern Mali, which is currently under the control of Taureg rebels who declared independence following a chaotic military coup there in March.

Nigeria is Africa's most populous nation, its largest oil producer and a member of OPEC. The West African nation is approximately 50 percent Muslim and 40 percent Christian, with the remaining 10 percent adhering to traditional animist beliefs.