The FAA has issued an emergency directive in the wake of an incident which caused debris from a Boeing 777-200 to fall on a Denver suburb. Some airplanes will be grounded under the new directive. 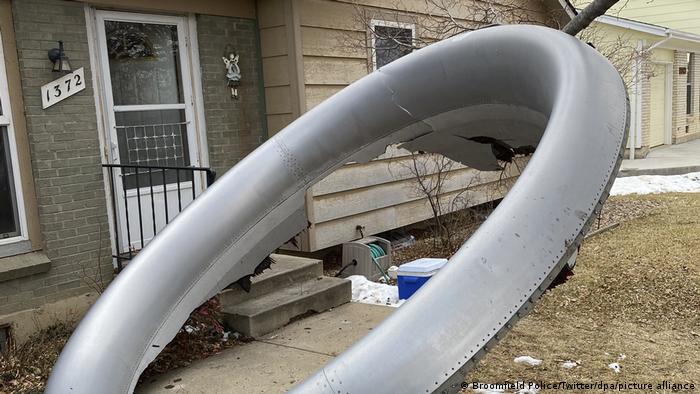 Boeing 777 planes with a certain type of engine will have to undergo "immediate, stepped-up inspections," the US Federal Aviation Administration (FAA) said in an emergency airworthiness directive issued on Sunday.

The FAA issued the emergency directive in the wake of an airline incident on Saturday.

Debris from a United Airlines Boeing 777-200 passenger plane fell onto a suburb of the US city of Denver after its right engine experienced failure shortly after takeoff.

FAA: Some planes will likely 'be removed from service'

It "will likely mean that some airplanes will be removed from service," FAA Administrator Steve Dickson said in a statement.

The initial review of Saturday's engine failure shows "inspection interval should be stepped up for the hollow fan blades that are unique to this model of engine, used solely on Boeing 777 airplanes," Dickson added.

United said it will continue discussions with US regulators "to determine any additional steps that are needed to ensure these aircraft meet our rigorous safety standards and can return to service."

United is the only US operator with the PW4000 engine type in its fleet.

Aircraft manufacturer Boeing has been plagued with issues surrounding a different model, the Boeing 737 MAX 8 model.

It was involved in two major crashes that killed more than 340 people in total:  Lion Air Flight 610 in Indonesia in October 2018 and Ethiopian Airlines Flight 302 in March 2019.

The entire fleet was grounded in response.

The grounding forced the resignation of chief executive Dennis Muilenburg and Boeing's largest financial hit in its 104-year history.

The model has since returned to European and US skies, after Boeing made changes to the design.

The American Airlines flight was the first commercial flight in the US since the Max was grounded in March 2019. Two plane crashes in Ethiopia and Indonesia meant authorities barred the plane from taking to the skies.

Airports in several West and Central African countries have been affected as air traffic controllers held a strike to demand improved working conditions. The strike was expected to last until Sunday.