Boeing boss admits mistakes were made on fatal MCAS system 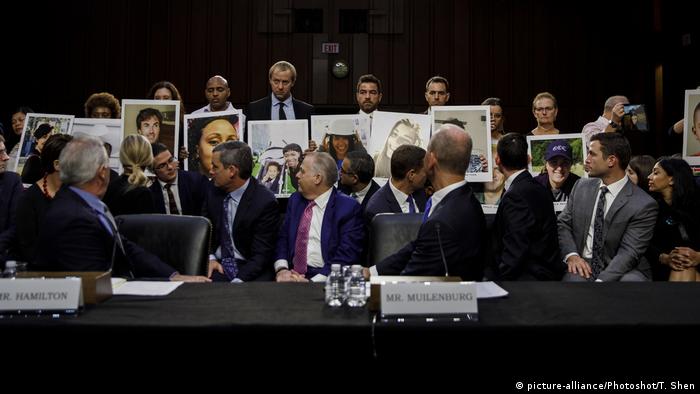 Boeing CEO Dennis Muilenburg returned to Capitol Hill on Wednesday to face a second day of questioning, this time in front of the House Transportation and Infrastructure Committee. Committee Chairman Peter DeFazio, a Democrat from Oregon, railed against the company, saying it has shown a "lack of candor."

In questioning Muilenburg, DeFazio grilled him on a number of issues focused on the MCAS safety system installed in the company's 737 MAX airplane.

Boeing was aware of several issues with the faulty system yet failed to do anything about it, leading to two crashes — one involving Lion Air Flight 610, in October 2018, and another involving Ethiopian Airlines Flight 302 in March 2019 — killing 346 people.

When confronted with documents outlining Boeing's knowledge of the potential of "catastrophic" consequences if the faulty system automatically turned itself on, Muilenburg admitted, "We made some mistakes."

CEO offers no answer to why Boeing approved faulty system

Muilenburg offered no answer, however, as to Boeing's inaction on a number of grave warnings from engineers who called for the program to be scrapped. Lawmakers also pointed to a series of text messages citing extremely erratic software behavior in flight simulations in 2016.

The system in question, which is designed to avoid a midair stall, automatically pushes the nose of the plane downward to avoid a loss of power.

At issue is the fact that Boeing originally used only one sensor to measure the plane's trajectory, and failed to alert pilots to the new system until after the first crash. The company also failed to tell pilots they had installed an optional warning system to alert them of possible data mismatches between sensors. Those failures led to situations in which pilots were unable to control the aircraft.

DeFazio also asked why Boeing would approve the MCAS system if it knew it was vulnerable at one point of failure. Muilenburg said the company was asking themselves that same question. The company has since built redundancy into the system, using two sensors instead of one.

On this and other problems related to the plane, Muilenburg said: "We've made mistakes and we got some things wrong. We're improving and we're learning." Though Muilenburg claimed the company was holding itself accountable, Representative Dan Lipinski of Illinois —where Boeing is headquartered —begged to differ: "I am not sure what accountability means if you got a $15 million (€13.5 million) bonus after Lion Air."

Lipinski would be the first of a number of lawmakers to hammer Muilenburg about his pay throughout the hearing. Representative John Garamendi of California, for instance accused the company of "pushing profits over quality and safety."

DeFazio was not solely focused on Boeing though, he also pointed to larger problems with Federal Aviation Administration (FAA), which licenses planes. He said: "We need answers. We need reforms on how commercial aircraft are certified," and how regulators "watch" companies like Boeing.

The FAA has come under pressure for its industry-friendly approach to oversight, often following the suggestions put forth by manufacturers such as Boeing, essentially letting the company conduct its own oversight.

Boeing hopes to gain FAA approval to return the 737 MAX — which has been grounded for eight months — to service by the end of the year, though international regulators say they may need more time than their US counterparts to review and certify changes made by Boeing.

Muilenburg was not only under scrutiny from lawmakers on Wednesday, as on Tuesday in the Senate, he was seated directly in front of victims' families for the hearing. On Wednesday, he began his opening statement by directly addressing the families and apologizing for their loss.