'Blue whale challenge': How to combat the dangers of an internet phenomenon

Social media has been abuzz with a dangerous 50-day challenge involving self-inflicted harm and suicide. Internet safety experts told DW that combating such abusive behavior begins with trust and openness. 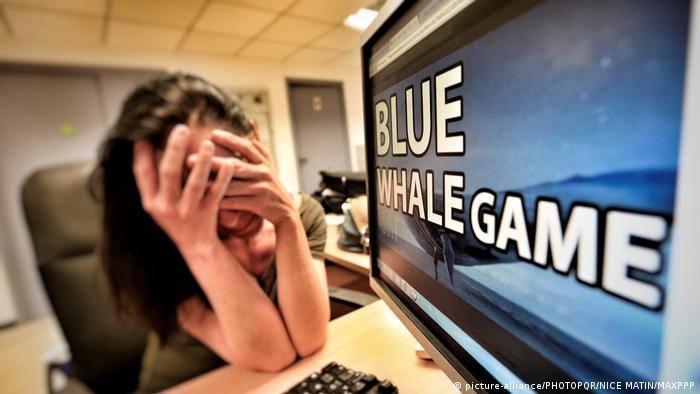 From France to Brazil, authorities have warned parents and educators of a challenge circulating on social media platforms called the "blue whale," allegedly a reference to a phenomenon in which the animal strands itself on land, typically leading to its death.

The so-called game consists of a series of challenges provided by a so-called "curator," which include handing over personal information used to coerce participants into fulfilling tasks such as self-mutilation and taking one's life.

The blue whale challenge garnered significant media attention after reports emerged that the game had been allegedly linked to scores of teenage suicides in Russia.

In France, authorities called for "vigilance," warning that the game could attract vulnerable youth use in the process of building their identity in the face of pressure from the group.

"Do not let yourself be influenced. No challenge is worth risking your life," France's national police said in a tweet.

Earlier this week, Brazil's justice minister announced the launch of a federal investigation into links between a social media challenge called the "blue whale" and occurrences of bodily injury, self-mutilation and suicide among adolescents.

Insults, rape and death threats: Even though the internet was supposed to be the great equalizer, hate speech online has led women to take a more passive role. In Germany, the search for solutions is on.

In Brazil, Justice Minister Osmar Serraglio said he was prompted to request the investigation after local authorities from the states of Parana, Minas Gerais, Pernambuco, Maranhao and Amazonas reported the growing threat of the challenge in their respective territories.

Authorities based their request on police records, accounts from victims' relatives and information provided by public health bodies and local governing councils. Local authorities have already launched investigations into three deaths with suspected links to the game, according to a ministry statement.

"We asked for the facts to be determined by the federal police and the game's organizers of be held accountable in Brazil," Serraglio said in a statement.

While officials in Europe and elsewhere have yet to confirm a direct link between the game and cases of teenage suicide, internet phenomena such as the blue whale challenge have led to instances of violence.

In 2014, two 12-year-old girls lured a fellow student into a forest in the US state of Wisconsin and stabbed her 19 times in an alleged bid to impress the fictional character Slender Man, created five years before for a Photoshop contest on an internet forum. At least one of the suspects said she acted out of fear that Slender Man would kill her family.

In 2013, researchers at the University of Oxford found that while suicide prevention forums assisted young users with depression and thoughts of self-harm, the internet also provided opportunities for perpetuating suicidal behavior.

"Communication via the internet and other electronic means has potential roles in both contributing to and preventing suicidal behavior in young people," said Keith Hawton, senior co-author of a review of fourteen studies on the relationship between self-harm and the internet.

"We are only not beginning to realize the extent of these possible influences," Hawton added, who serves as a professor at Oxford's Center for Suicide Research.

But since the 2013 review, authorities across the globe have increased efforts to connect with young people coping with suicidal behavior in order to prevent cases of self-harm, including the European Commission.

Sarah Willoughby, web content specialist at the EU-backed organization Better Internet for Kids, told DW that parents and educators can help young people traverse the web safely through several means and effectively prevent youth from engaging in such online abuse.

"This is primarily about education and we need to highlight the importance of children and young people being able to talk openly about things which concern them, whether specifically online-related or otherwise, although there is often a convergence of the two," she said.

Willoughby noted that by encouraging young people to take advantage of the positive opportunities presented online and teaching core messages, such as "think before you post" and "look out for each other," parents and educators can effectively "equip young people with transferable digital literacy skills."

"Above all, it's crucially important that children and young people should feel comfortable and able to raise any concerns they have with trusted adults, know that they don't have to face any issues alone, know where they can go for help and support," she told DW.

Whether authorities find direct evidence to link cases of teenage suicide in Russia, Brazil or France to the blue whale challenge remains to be seen. But its emergence and proliferation on social media provides a sobering reminder of the need to reinforce positive interactions for minors in an age when the internet has become ubiquitous.

Safety in the cloud | DW Shift