Thousands of anti-austerity activists from 39 European countries have rallied in Frankfurt in protest against the European Central Bank. The ECB opened its new headquarters in the German financial city. 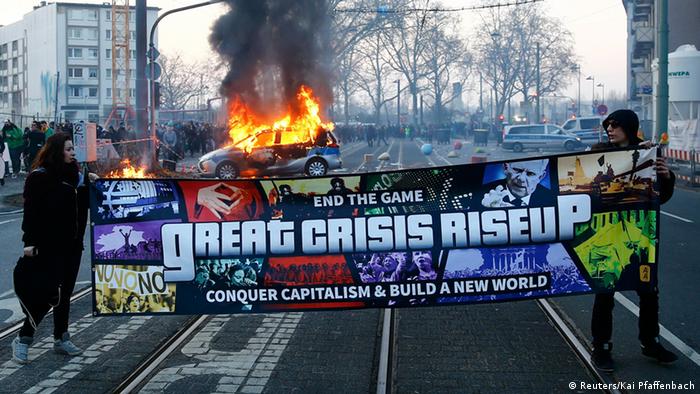 More than 10,000 people filled Frankfurt's historic Römerberg square for a peaceful rally on Wednesday afternoon, just hours after the European Central Bank unveiled its new headquarters in the financial hub.

The demonstration was organized by Blockupy, an alliance of trade unions and anti-capitalist groups critical of the ECB's role in restrictive austerity measures in EU member states, such as Greece.

The peaceful march was a marked contrast to scenes witnessed in the early hours of the morning, as anti-capitalist protesters torched security vehicles and engaged in street battles with police.

The ECB, along with the European Commission and International Monetary Fund, is part of the so-called "troika" that monitors compliance with the conditions of bailout loans for financially troubled countries in Europe. Some of those conditions have been blamed for increasing unemployment and stunting economic growth.

Spaniard Sol Trumbo Vila, who was in Frankfurt facilitating the international coordination of the Blockupy coalition, told DW that participants had come from France, Belgium, the Netherlands, Denmark, Italy, Spain, Portugal, and several other countries, to show their solidarity with Greece.

The ECB is considered one of the main actors in the imposition of austerity policies being implemented all over the European Union," he said. "That's why many people from different European countries felt the need to come here and show their opposition to the Europe that is being built now."

Of the international participants, the largest contingent came from Italy. Giorgio Grappi, an activist from Bologna, told DW it was important for Europeans to stand up to the ECB's policies.

"We are here to show what kind of Europe we want, and I really hope we can have a lively demonstration and express our ideas of a different Europe," he said.

The Frankfurt protest was scheduled to coincide with the unveiling of the ECB's new headquarters in the city.

"I think it's really important to highlight the fact that while [the ECB] has just built a new headquarters for more than a billion euros, at the same time they're demanding countries slash their public budget by over that sum, it shows where their priorities are," said Pascoe Sabido, who travelled from Belgium where he works with the Corporate Europe Observatory.

Speaking to an audience of about 100 guests at the low-key ceremony, Draghi said it was "not fair" to single out the ECB for unpopular austerity restrictions in place in some parts of Europe, and described protesters' actions as misguided, saying that countries need to take on more responsibility themselves.

"People are going through difficult times. There are some, like many of the protesters outside today, who believe the problem is that Europe is doing too little," Draghi said. "But the euro area is not a political union of the sort where some countries permanently pay for others."

In the early hours of Wednesday, fierce clashes broke out between police and a group of protesters who set several security vehicles on fire and hurled stones and tear gas at officers.

Police said 350 people were arrested, but that those intent on violence were a minority.

Authorities added that at least 14 police officers were injured in the confrontations, while protest organizers said on Twitter that more than 100 rally participants were hurt by pepper spray.

Rage against the ECB: What's Blockupy against?

Blockupy, an alliance of leftist groups, has repeatedly organised protests in Frankfurt's banking district since 2012, mostly directed against the European Central Bank. Who are Blockupy, and what is it they're against? (17.03.2015)

Those who hold the European Central Bank responsible for squalor and poverty in Europe haven't understood anything, writes DW's Christoph Hasselbach. (18.03.2015)