A suicide bomber in Yemen's southern city of Aden has killed several dozen soldiers. There has been no immediate claim of responsibility for the attack. 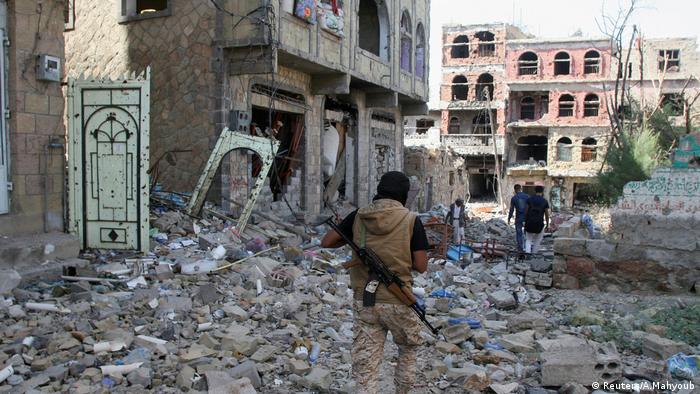 At least 35 Yemeni soldiers were killed and more than 60 others wounded in a major attack Saturday on forces allied to a Saudi-led military campaign.

The explosion happened near a military camp in the northeastern part area of Al-Sawlaban near the city's international airport as a crowd of soldiers gathered to pick up their salaries, an official told the German news agency DPA on condition of anonymity.

Aden, the provisional capital of Yemen's Saudi-backed government, is at the center of a civil war with the Iran-allied Houthi rebels.

Saudi Arabia intervened in Yemen's civil war in March 2015 to fight the government's foes in the Iran-allied Houthi movement but has failed to dislodge the group from the capital, Sanaa, despite thousands of airstrikes. About 10,000 people have been killed in the ongoing conflict.

Yemen: crippled by hunger and war

A 48-hour ceasefire in Yemen has hit a rocky patch with sporadic fighting reported over the weekend. None of the factions have emerged with the upper hand in a conflict that's killed thousands and displaced millions. (20.11.2016)