Black-red-gold: The origins of the German flag

European soccer championship enthusiasts like to wear their national colors. Germany's fans sport black, red and gold. The colors have a checkered history. 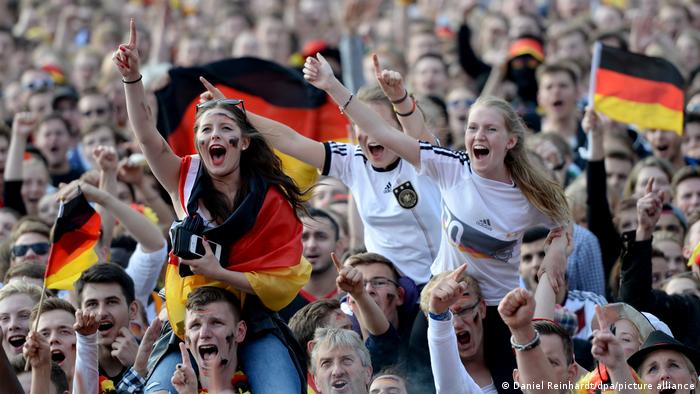 Following a long reflection process, the authors of Germany's new constitution, the Basic Law, added the following sentence into Article 22 in 1949: "The federal flag is black-red-gold."

In fact, the color combination already had at least 200 years of history behind it in Germany.

Nowadays, the flag represents a tradition of freedom and democracy, but it was a long and winding road to get there.

The roots of the black-red-gold triad were long thought to have been in the Middle Ages. Although the coat of arms of the Holy Roman Empire of the German Nation showed a black eagle with red legs against a gold background, those were not the official colors of the empire.

The alleged origins in the Middle Ages

The color combination only became a political symbol in the aftermath of the War of the Sixth Coalition (also known as the "Wars of Liberation") beginning in 1813 against the French Empire under Napoleon Bonaparte, who had occupied large parts of Germany. 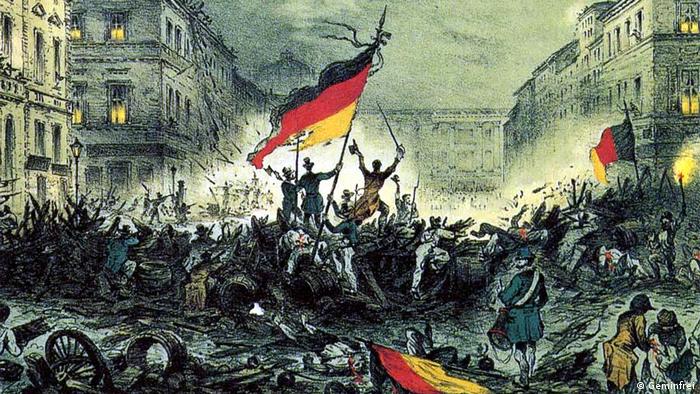 Revolution 1848: Here, barricade fights on March 18 and 19 in Berlin. The orientation of the black-red-gold colors on the flags still varied

During the war, Prussian propaganda highlighted one fighting unit in particular: the volunteer corps of Major Ludwig Adolf Wilhelm von Lützow, which then became known as the "Lützower Jäger" (Lützow hunters).

The corps owed its fame not least to notable members such as Friedrich Ludwig Jahn, who was nicknamed "Turnvater" (father of gymnastics) because of his sports achievements, the Romantic Age composer Carl Maria von Weber and the writer Theodor Körner, who dedicated his popular poem Lützow's Wild Hunt to the regiment.

While Jahn remains controversial for antisemitic statements, Körner's war poem is steeped in patriotic fervor, reflecting the anti-French spirit of his era:

Wake up, my people!

The smoke signals are there,

Bright from the North shines the light of freedom.

You shall plunge steel into the enemy's heart,

Your German land with your blood pure!

The Lützow Free Corps also made a name for itself through its appearance: black uniforms, red insignia and gold buttons. The black was born out of necessity — the volunteers brought their own uniforms. To make them look as similar as possible, it was easiest to dye them black. Other colors were hard to come by at the time.

In 1815, at the end of the liberation wars, student fraternities from all over Germany gathered in Jena to form a nationally united "Urburschenschaft" (Original Brotherhood) — largely initiated by Turnvater Jahn. They chose a vertically striped red-black-red flag with a golden branch in the middle, based on the colors of the Lützow uniforms.

These colors were adopted by the forces forming in Germany in the early 19th century, which called for a republic and national unity.

At the Hambach Festival in 1832, a huge festival of the democracy movement, yellow, red and black striped flags were waved. The French tricolor flag was then countered by a German tricolor one. 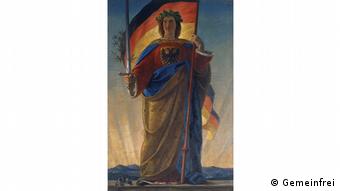 'Germania' enthroned above the National Assembly in St. Paul's church in Frankfurt, 1848

But after the bloody suppression of the revolution, only the Prussian-dominated German Confederation remained, which no longer wanted anything to do with the democratic black-red-gold. In fact, the color combination was even banned in some German states.

On January 18, 1871, Otto von Bismarck read the Imperial Proclamation in the Hall of Mirrors at the Palace of Versailles. The victory over France in the Franco-Prussian War (1870/1871) led to the founding of the German Empire.

The colors of Prussia, white and black, supplemented by the red of the Hanseatic cities, became the colors of the national flag.

In 1919, the National Assembly, which met in Weimar after the collapse of the German Empire, again designated black-red-gold as the flag of the newly founded Weimar Republic.

This was preceded by a bitter "flag dispute" between republicans, who demanded black-red-gold, and monarchists and communists, who wanted an all-red flag.

The black-red-gold flag remained the state flag until September 1935. At a Nuremberg Nazi Party Rally, not only were the "race laws" passed, but the Nazi swastika flag was also declared the national flag. At the same time, Jews were forbidden to hoist it. 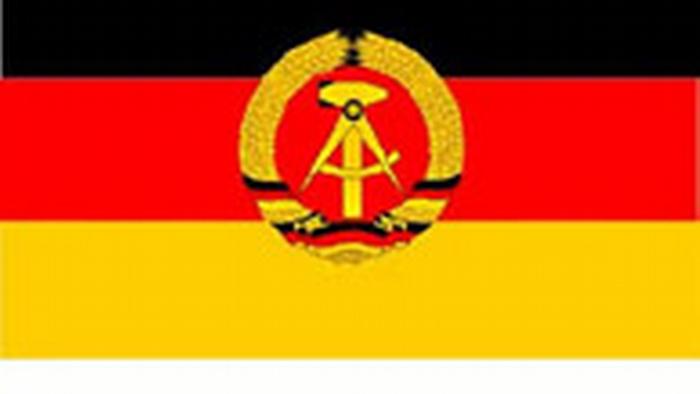 The excessive use and abuse of national symbols in Nazi Germany led to a more restrained approach after the end of the Second World War and the early days of the Federal Republic of Germany, established in 1949.

That same year, the Parliamentary Council decided, with one dissenting vote, in favor of black-red-gold as the colors of the state flag of the Federal Republic of Germany.

But even the young state could not do without symbols, and in 1950 it added a national coat of arms to the black, red and gold flag: a stylized black eagle against a gold background with red claws looking to the right. A late descendant of the eagle that had fluttered on the coat of arms of the Holy Roman Empire of the German Nation.

This "federal service flag is reserved for official agencies of the federal government," the Federal Ministry of the Interior clarified at the time.

Anyone waving the flag at a national team match, for example, was formally committing a public offense that could be punished with a fine.

There was also continued wrangling over the use of the "federal eagle" on the jerseys of the German national soccer and handball teams. 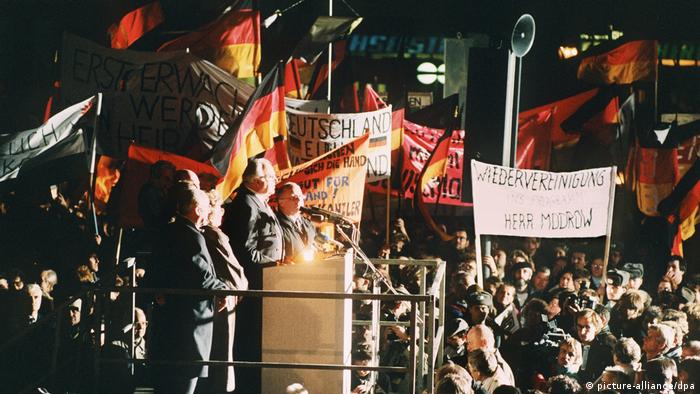 Black-red-gold federal flags made a grand entrance during the so-called peaceful revolution in East Germany in 1989 with protesters against the SED regime waving black-red-gold flags — but without the state symbols of the GDR.

The GDR had also declared black, red and gold to be the state flag, later adding onto it the emblem of a stylized hammer and a compass in the middle of a wreath of ears of corn.

5 soccer songs that have nothing to do with soccer

Football anthems are chosen by fans — not the music industry. As the European Championships get underway with some fans in stadiums, here are five songs that originally had nothing to do with sport at all.

It's easy to imagine how four weeks of street parties, general frolicking and bodies painted in the colors of the German flag could lead to an increase in national hay-rolling. Now there's also proof.

Germany, France, Portugal, and Hungary form Euro 2020’s 'Group of Death.' Making it out of Group F will be an uphill task even for the reigning World Champions. But their coach Didier Deschamps is out to make history.