Glenn Close, Rami Malek and "Black Panther": The top winners at the Screen Actors Guild awards offer a preview of what could come at the Oscars. 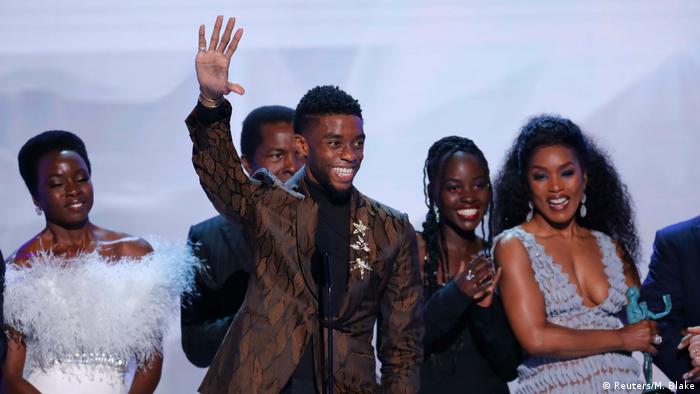 The award for best ensemble cast in a motion picture is the most significant award the film has received yet — putting the movie in contention for Best Picture, one of the seven awards it's nominated for, at next month's Academy Awards.

The awards ceremony, which includes bests for both television and cinema offerings, is considered a good indicator of how the Academy will vote, as a large percentage of the academy is made up of actors.

"To be young, gifted and black," actor Chadwick Boseman said from the stage, as he tried to put into context the moment for the trailblazing Black Panther, which also won for its stunt performer ensemble.

An award for actors from actors

Glenn Close, who has been nominated for an Oscar seven times but has left empty-handed each time, took home a best actress SAG award for her role in The Wife. Best supporting actress went to Emily Blunt for her role in the horror thriller A Quiet Place, directed by her husband John Krasinski.

Rami Malek snatched best actor for his portrayal of the rock star Freddy Mercury in Bohemian Rhapsody. Dedicating his award to Mercury, Malek said, "I get some power from him that's about stepping up and living your best life, being exactly who you want to be and accomplishing everything you so desire."

The actor's awards pile is growing even as the film's director, Bryan Singer, is facing multiple accusations of sexual assault with minors — claims Singer has denied.

The award for best supporting actor in a film went to Mahershala Ali, who won for his performance in Peter Farrelly's interracial road trip Green Book.

Sweeping the comedy series awards was the Amazon series The Marvelous Mrs. Maisel, which won best ensemble in a comedy series and nabbed individual honors for actors Rachel Brosnahan and Tony Shalhoub. Alda recently revealed he is struggling with health issues

Actor Alan Alda, perhaps best known for his role in the series M.A.S.H., was presented with the lifetime achievement award by Tom Hanks.

"I see more than ever now how proud I am to be a part of our brotherhood and sisterhood of actors," said the 83-year-old actor. "It may never have been more urgent to see the world through another person's eyes. When a culture is divided so sharply, actors can help — a least a little — just by doing what we do. And the nice part is it's fun to do it. So my wish for all of us is: Let's stay playful."

The Screen Actors Guild showcased Hollywood's ethnic diversity during its annual awards ceremony. It was a sharp contrast to the much-criticized, all-white nominees for this year's Oscars. (31.01.2016)