Congolese activists have stolen an African funeral statue from a museum in Nijemegen, saying they were "reclaiming" colonial-era artwork. They streamed their effort on Facebook. 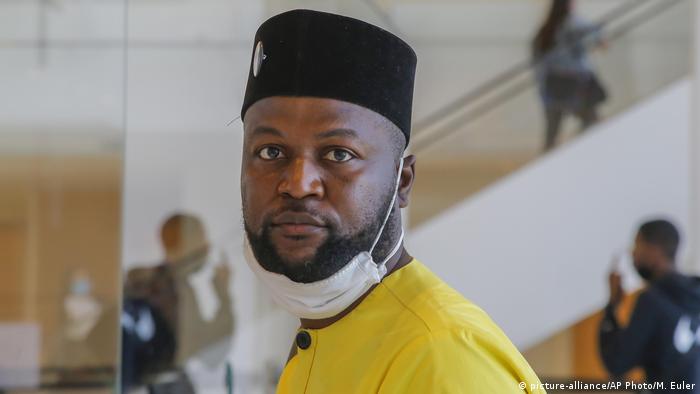 A group of activists on Friday stole a Congolese funeral statue from a Dutch museum while streaming their actions live on Facebook.

The activists said they were reclaiming the statue from the Afrika Museum in Nijmegen, 120 kilometers (75 miles) south-west of the capital, Amsterdam, because it had been looted during the colonial era.

A member of the activist group, Mwazulu Diyabanza (pictured above), said in a speech on the social networking platform that they acted as "part of the recovery of our artworks that were all acquired by looting, robbery, violence'' during Belgium's rule of the West African country.

The Facebook live stream ended with police handcuffing one of the nearby protesters. The statue was taken into police possession and later returned to the museum.

Arrested in Paris over funeral pole

It follows a day after prosecutors said a tooth believed to belong to Congolese Patrice Lumumba would soon be handed back to his relatives, ending a dispute that has lasted several years.

Last June, Congo-born Diyabanza and four other protesters were apprehended at the Quai Branly Museum in Paris as they tried to make off with a 19th-century African funeral pole.

French prosecutors placed them under investigation.

The Dutch museum said their security officers did not intervene to avoid damaging the statue. Officials had already alerted the police.

Diyabanza has not yet commented on the protest.

Director of the Africa Museum, Stijn Schoonderwoerd, told Dutch radio that the museum indeed owned looted art, adding that "we have already said that we are in favor of returning stolen artifacts."

The Afrika Museum is part of a group of Dutch museums that last year unveiled a set of principles for handling claims on cultural objects in their collections.

60 years after independence, traces of the system of exploitation and violence that Leopold II and colonial-era Belgium created still remain in DR Congo. The propensity for violence is inherited, experts say.

He's inspired generations: Patrice Lumumba became prime minister when the Congo was still under Belgian colonial rule. But he was forced out of office shortly after the country's independence and later assassinated.