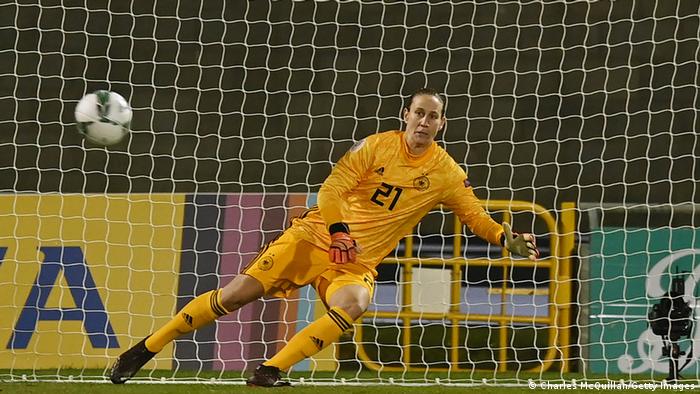 The road to Dublin has been a long one for Ann-Katrin Berger. There were moments along the way when she felt, in her own words, like "a martian”, like "Frankenstein”. "I was always a fighter, I've always had to learn things the hard way,” says the 30-year-old Chelsea goalkeeper, for whom this qualifier was the fulfilment of a "childhood dream”. Against Ireland on Tuesday evening, Ann-Katrin Berger celebrated her debut for the German national team, three years after being diagnosed with thyroid cancer.

“When the national anthem started playing, I had goosebumps,” said Berger after the game. “But after that, I had to concentrate and put my feelings aside.”

It's an unfortunate fact, from Berger's point of view, that the game was the first competitive match in which Germany have conceded a goal since July of 2019. There's little the keeper could have done about it; the unwanted record was more or less forced on her. A clumsy challenge inside the box from Marina Hegering was punished with a spot-kick, which Katie McCabe hammered into the top-left corner. On the stroke of half-time, Berger was denied her dream debut.

Germany were already two in front though. It was a penalty of their own that gave the guests their initial lead in the 21st minute, Lina Magull dispatching expertly after McCabe was adjudged to have fouled Svenja Huth. The German's second came in the 29th minute, an instinctive strike from the edge of the box from Tabea Waßmuth, the Hoffenheim forward's first ever international goal on her second ever appearance for Germany.

Ireland had come into the game desperate for a victory in order to guarantee their own place at the Euros, and though they headed in at half-time with freshly renewed hopes, it wasn't to be. The damage had been done. In the first half, Germany were characteristically ruthless, pressing tirelessly in all areas of the pitch, moving the ball with purpose, dominating in every aspect.The same can't be said of the guests' performance in the second 45. Gaps opened up between defence and midfield, the sense of purpose that they had exuded before the break was missing. 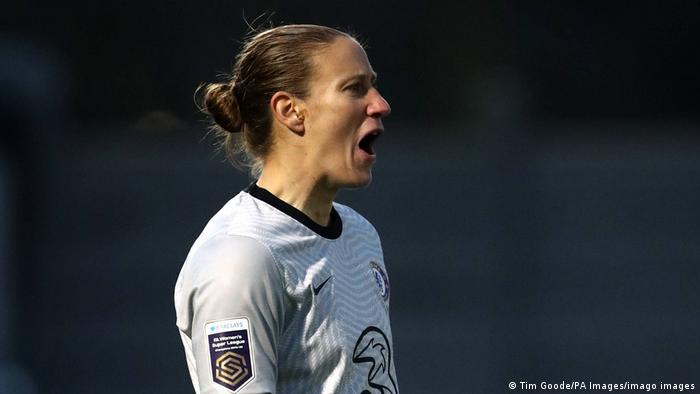 Berger plays her club football for Chelsea in England

“After we conceded, we were missing precision and calm,” reflected Martina Voss-Tecklenburg after the game. “We have to be a bit cleverer than that.”

But the Irish were unable to exploit the chinks in the German armour. In the 85th minute, Tabea Waßmuth was given too much time on the edge of the Irish box, and made it 3-1 with her second of the game, another well-placed drive into the bottom corner. With Ukraine winning against Montenegro, Ireland's qualification hopes have been dashed.

Germany's place at the Euros was of course long since secure. Tonight's victory was their eighth in eight games in qualification, the completion of a perfect campaign. They've scored 46 goals in those eight matches, conceding only once.

Despite having that blemish on her record, it's been quite a journey for the Chelsea stopper. Last week, almost three years to the day after receiving her diagnosis, she was nominated for the FIFA Best Goalkeeper Award. In Merle Frohms and Laura Benkarth — to say nothing of returning veteran Almuth Schult — Berger has stiff competition for the German No.1 jersey. But with her debut behind her and a nomination for the most prestigious individual prize in her name, she's made herself impossible to ignore.

When Germany host Israel for a World Cup qualifier, one Israeli player will feel right at home — Sharon Beck, who was called up to Germany's national team but decided to represent the Jewish state instead.

The days of German clubs dominating the Women's Champions League are gone. Sunday's final between Barcelona and Chelsea will see a new name on the trophy, but Chelsea's German duo are likely to leave their mark.

Champions are being crowned across the continent, but Bayern and Wolfsburg are still battling it out for Bundesliga champion. A look at this week's talking points from women's football.