BioNTech admits it will struggle to fill COVID vaccine 'gap'

The co-founder of the German vaccine developer has spoken of the battle to ramp up production of its coronavirus jab. His comments come amid growing criticism of Europe's vaccine rollout. 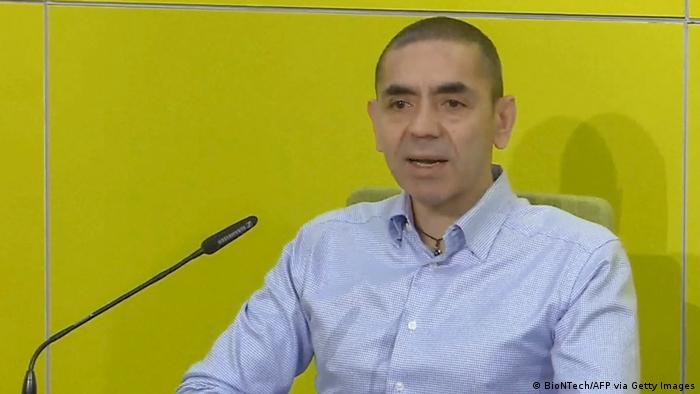 Ugur Sahin, co-founder of the German vaccine developer BioNTech, is hoping to be able to boost production of the BioNTech-Pfizer vaccine by February, according to an interview with the Der Spiegel news magazine published on Friday.

The BioNTech executive also said he had been surprised by the European Union's reticence towards purchasing enough supplies of the vaccine and warned that the current vaccine availability was not looking "rosy."

"We are lacking other approved vaccines and we have to fill this gap with our vaccine," the Mainz-based company founder said.

Sahin said he was hopeful that, towards the end of January, the vaccine developer would have "clarity as to whether we can produce more and how much."

This included the plan to have a new manufacturing facility in the city of Marburg up and running in February — "far earlier than planned" — which could produce a further 250 million doses in the first six months of 2021.

With its American partners at Pfizer, BioNTech is attempting to scale up production to meet the huge demand for a global immunization program.

While several other vaccines have been given the rubber stamp in different countries, the BioNTech-Pfizer vaccine was the first to gain approval in Europe and North America.

However, production faces extra challenges due to the complex technology behind it.

He explained to Der Spiegel that there is a lack of available facilities that can quickly be turned over to vaccine production.

"We are trying to find new cooperation partners to produce for us. But it's not as if there were specialized unused factories lying around across the world that could produce vaccines of the required quality from one day to the next."

The second major problem for producing the BioNTech-Pfizer vaccine is that the high complexity of the mRNA technology does not lend itself well to easy productive adaptability.

"You can't just switch over, from producing vaccines instead of aspirin or cough syrup. The process requires years of expertise and the appropriate structural and technological equipment," Sahin explained.

Despite receiving emergency approval in the US and UK several weeks ago, the BioNTech-Pfizer vaccine only received EU regulatory approval just days before Christmas.

EU countries have launched large-scale vaccination programs, but there are now concerns about whether there will be sufficient doses and whether demand can be met.

Fellow co-founder, and Sahin's wife, Özlem Türeci, told the magazine that Brussels had assumed there would be a "basket of suppliers to choose from" due to the array of different vaccines in development.

This meant the EU ended up placing a relatively low order of just 300 million doses with BioNTech-Pfizer, and not until November. The US, on the other hand, ordered 600 million doses in July.

Both Bavarian State Premier Markus Söder and leader of the business-friendly FDP party Christian Lindner have called for vaccine production to be massively stepped up.

However, Sahin pointed out in his interview that part of the problem lay with the European Commission's previous assumptions about vaccine availability. While the EU had pre-emptively ordered vaccines from BioNTech, they had also put in orders with other producers, yet these other vaccines have still not been approved.

"There was the assumption that many more companies would come with vaccines. Apparently, there was the impression that we [the EU] will get enough, it won't be that bad and we [Brussels] have it under control. This surprised me," Sahin said.