Several nations are investing in a bio-based economy to slash carbon footprints. At a recent summit, experts point out how more work is needed to realize bioeconomy's potential as a climate solution. 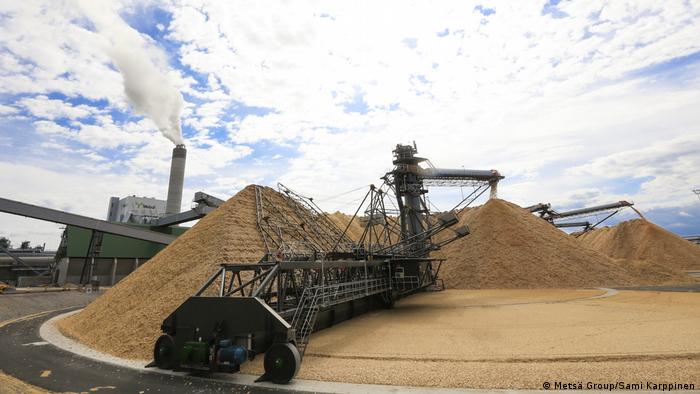 Against a backdrop of refineries and a tall chimney, hills of woodchips welcome visitors to the Äänekoski Metsä bioproduct mill in central Finland, the largest mill of its kind in the Northern Hemisphere.

In fact, it's more than a mill — it's a whole ecosystem of companies that turn a profit from birch, pine and spruce logs trucked in daily from sustainably managed forests around the country.

The Metsä Group's 35-year-old pulp mill reopened in August 2017. As a public-private partnership, and by far the Finnish forest industry's largest-ever investment, it's a prime example of the growing trend for "bioeconomy" projects that lawmakers and the industry are touting as a way to reduce dependence on fossil fuels. 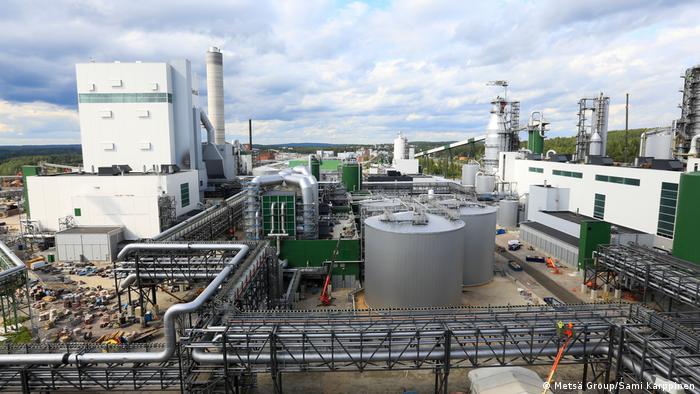 The biomill presents an industrial appearance

These days, the mill doesn't just produce pulp, but a whole range of other products made from what had previously been categorized as waste.

"Apart from its size, we have also introduced a new way of thinking, where we emphasize co-creation of businesses," says Niklas von Weymarn, vice-president of the Metsä pulp producer.

The mill can process 6.5 million cubic meters of wood into 1.3 million tons of pulp each year, and roughly 90 percent of its turnover is from selling that pulp to Europe and Asia.

But connected companies refine pine tree byproducts such as tall oil and turpentine for various purposes, and produce solid biofuels made from bark and sawdust.

And the mill has another key output: electricity. Once it reaches full capacity later this year, the mill is expected to generate 1.8 terawatts of fossil fuel-free power annually — that's equivalent to 2.5 percent of the country's power production, or enough to heat 100,000 homes.

There's no single definition of bioeconomy, which covers a huge range of sectors embracing the high-tech use of biological processes and organic materials.

"The bioeconomy is a paradigm shift," Marc Palahi, director of the European Forest Institute, told DW. "Basically, it's an economy based on life." He points out that petroleum isn't just used for energy, but also the manufacture of a host of products and materials used in industry and in daily life, including plastics and fabrics.

Bioeconomic products include plastics made from algae or shrimp shells, and fabrics made from milk — replacing petrochemicals with organic matter.

The term "bioeconomy" is also used to cover more traditional uses of natural materials, like wood, as an alternative to carbon-heavy steel and concrete in construction. 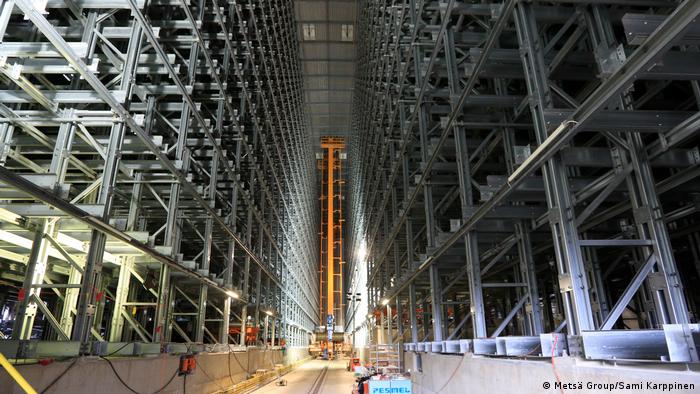 At its production site, the Metsää mill is independent of fossil fuels

"You are using biomass- or forest-based renewable resources for products and services instead of non-renewable materials like oil or coal," said Lauri Hetemäki, assistant director of the European Forest Institute, speaking at the 2017 Bioeconomy Investment Summit in Helsinki.

Bioeconomy is often spoken of in terms of circular economy, because it recycles byproducts from sectors like agriculture and manufacturing as raw materials.

The Äänekoski mill, for example, is pioneering the use of waste sludge from wood pulp production to make pellets that are in turn converted into 20 gigawatts of biogas per year — enough to fuel some 1,800 passenger cars.

It also supplies off-site companies, including an American tall oil refinery that produces chemicals for use in paints, roads and pharmaceuticals that would otherwise require raw materials from fossil fuels.

Gaining traction around the world

The European Union has embraced the bioeconomy with gusto, launching its first bioeconomy strategy in 2012. But by now, it's becoming a hot topic across the globe.

"Today, we have more than 50 countries and regions in the world that have national and regional bioeconomic strategies," Christian Patermann, former director of the European Commission and advisor to the German government for bioeconomy, told DW. "It's a big success, which we did not expect 12 years ago."

Recently, all provinces in Canada signed the Pan-Canadian Framework on Clean Growth and Climate Change, potentially paving the way for a bioeconomy boom. The Metsää bioproduct mill in Äänekoski is banking on bioeconomy

"The whole country is engaging in low-carbon economy, and definitely bioproducts are a means to an end," said Judith Bosse, director general of CanmetEnergy research center under the Canadian Government’s Department of Natural Resources. "So we see a lot of interest [in bioeconomy] at this stage."

Advocates say other countries, like Brazil, China and India, have yet to grasp bioeconomy's full potential.

An Indian biotech industry group valued the country's bioeconomy at more than €30 billion ($35 billion) in 2015. But more than half that sum was in the biopharmaceutical sector, which produces bio-based drugs, which may not involve an essential reduction of fossil fuel use, recycling or circular economy.

"India has to focus more on research and investments into renewables," said Hemanathan Kumar, an Indian post-doctoral bioeconomy researcher at Jyväskylä University, Finland.

The future of bioeconomy

Von Weymarn says the Äänekoski mill is carbon-negative because it plants new trees for each one felled for use by the mill. "For every ton of pulp that we produce, we also bind fossil CO2 to the forests in Finland," he explained. The forests are managed sustainably, the company says. Still, the mill is only independent of fossil fuels on its production premises. The wood arrives on diesel-fueled trucks.

That's something the Metsä Group is hoping to change.

The company is talking with the truck manufacturers about developing biogas engines, and has started producing biogas at the mill. "So hopefully in the future, a significant part of the transport could also be based on biofuels," von Weymarn said.

To really distinguish itself as a bioeconomy pioneer, Hetemäki says the mill should generate at least 50 percent of its turnover from bioproducts generated from wood waste — rather than freshly generated pulp. Currently, that figure stands at just 10 percent.

"You should ask this question again in 10 years' time: whether these hopes of generating these innovative bioproducts from waste streams have been realized," Hetemäki said.

The beaches of Trelleborg in southern Sweden are awash with algae. You may not want to swim in it but the goop is a boon for environmentalists thanks to a pioneering project that turns it into biofuel. (08.08.2016)

Biofuel – a resource of the future