18-year-old Billie Eilish made the Grammy Awards her own on Sunday. Not only did she become the youngest person to take home the top Grammy awards for Best Record, Song and Album of the Year, she also took home Best New Artist. No one has made the Grammy grand slam since Christopher Cross in 1981.

Read more: Billie Eilish: How the anti-star became a superstar

Her song "Bad Guy," a whispered rap with a menacing backbeat that has been described as nu-goth pop and went number one around the world, won Song of the Year and Recording of the Year.

Eilish's debut, double platinum When We all Fall Asleep, Where Do We Go? won best pop vocal album, with her brother Finneas O'Connell also awarded for engineering and producing the record.

The remarkable triumph of the LA native, who only turned 18 last month, was overshadowed by the tragic death of former Los Angeles Lakers star Kobe Bryant. In addition, numerous controversies dogged the Recording Academy on the eve of the awards, with the ousted CEO accusing the Grammys nominations process of being rigged, and rapper Diddy calling out the organization for not giving enough respect to R&B and hip-hop.

Lizzo, one of Eilish's main competitors who won three awards including including Best Pop Solo Performance, kicked off the gala at the Staples Center by dedicating it to Bryant. That same arena is where the NBA icon made history with the Los Angeles Lakers.

Eilish and her brother collaborated on her debut album in a bedroom of the Los Angeles-area home where they grew up. They have been working together for several years, with Eilish only 14 when she won plaudits for the song Ocean Eyes — written and produced by her brother — which was independently released online in 2016.

O'Connell said on Sunday night that the duo never thought that an album that addresses depression, suicidal thoughts and climate change would be up for a Grammy.

"What's next? I don't know — be in this moment is all I'm thinking about," Eilish told reporters backstage. 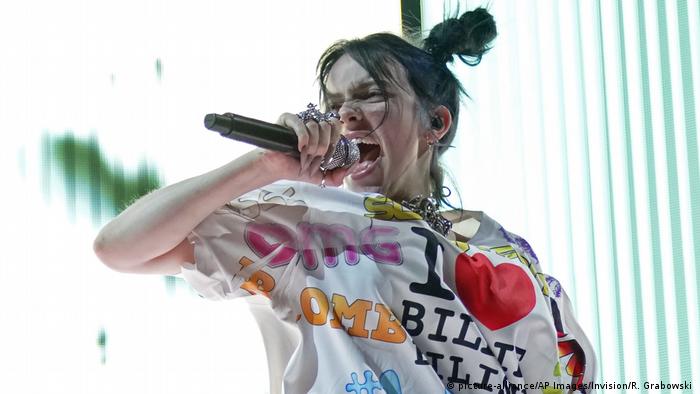 "Mainly I think the fans deserve everything," she said, standing alongside O'Connell, who shared in her Grammy glory.

"I feel like they have not been talked about enough tonight because they're the only reason any of us are here at all. So thanks to the fans."

And she gave a special shout out to Ariana Grande, who despite five nominations, went home empty-handed, saying that Grande's Thank U, Next album had been an important record for her and deserved to win. The onstage moment recalled Adele saying the same thing about Beyonce the year Adele triumphed.

"I think it deserves more than anything in the world, I love you so much," Eilish said of Grande's record.

The success of a young white girl came on a night the Recording Academy seemingly went out of its way to highlight diversity, especially in light of ongoing claims that the Grammys are consistently too male and too white.

Gary Clark Jr, who won three Grammys including Best Rock Song for his anti-racist This Land, gave several inspired performances. His success was seen by some as an overdue recognition of the influence of black artists on rock.